Buttercup Bill is a film that bravely redefines the norms and restrictions of the love story, as the twisted, psychological aesthetic of Remy Bennett and Emilie Richard-Froozan’s piece forces the audience to come face to face with the tainted concept of romance that plagues society today. 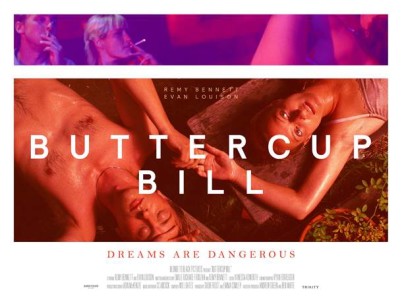 Trinity Film is delighted to announce that it will release BUTTERCUP BILL – the highly-anticipated debut feature from New York film-making duo Remy Bennett and Emilie Richard-Froozan and the first production of Sadie Frost and Emma Comley’s new outfit Blonde to Black Pictures in August 2015 in the UK.

Billed as a “Southern Gothic Romance” this impressive debut is teeming with authenticity and with an incredibly compelling central performance from actor/co-director Remy Bennett (grand-daughter of Tony Bennett).
Having premiered at New Orleans, Raindance and MARFA film festivals, Buttercup Bill tells the story of a twisted romance between lifelong friends Patrick (Evan Louison – Not Dark Yet, Mariah, Blindsided) and Pernilla (Remy Bennett – The Wolf of Wall Street, Boardwalk Empire) – mutually obsessed, but clinging on to dark secrets. Travelling from the seedy, neon-lit New York bar scene to a nameless town in the sweaty and whisky-soaked Deep South, Pernilla seeks comfort from Patrick after the suicide of their childhood playmate. At first innocent and playful, their chemistry soon gives way to subversive games of sexual jealousy, making unwitting pawns of those around them. As the lines between love and cruelty, and fantasy and reality become blurred, the question looms large: can they ever be together? Should they?

Sadie Frost and Emma Comley from Blonde to Black Pictures said: “We are thrilled to be partnering with Cedric and Trinity for the release of our first feature “Buttercup Bill” in the UK this Summer. Trinity is the perfect fit for Blonde to Black and Buttercup Bill; they have released some of our favourite movies by some great directors, we love the ethos of the company and it feels like a natural union”

BUTTERCUP BILL will be released in Cinemas, On Demand and DVD 5 September 2015.

From the very onset of the film, the elements of Bennett’s gritty profile in the film industry immediately comes to light in comparison with pieces such as ‘The Wolf of Wall Street’; a rich sense of cruelty immediately announces itself through the cinematography, the writers taking an almost Artaudian perception on how the worst forms of cruelty are, in reality, inflicted solely by aspects of mankind, this film in particular highlighting how this extends to something as seemingly pure as love between the protagonists of Patrick and Pernilla.

The direction of the cast as a whole was highly fluid, the naturalistic style of the piece being what effectively unnerves the audience through the jealous flirtation and dangerous mind games that erupt between these two supposed soul mates. The remote setting in turn dramatically heightens this sense of ambiguity, the almost satirical take on religion additionally heightening the idea that the film could almost relate to the Shakespearean concept of Green Worlds. This then adds to the psycho-analytical aspect of the film, heightening the idea of the protagonists being caught up in their own little world devoid of restriction, the elements of sex and drugs conveying how they’re becoming a danger even to themselves in the process, and so relating back to how one of the main speculations of the film involves whether or not these lovers should truly be together.

What makes the film really refreshing is the fact that, despite all the similar elements that mark the foundation of this film with those like ‘The Wolf of Wall Street,’ the use of the sweaty, messy style of the piece forces the audience to think and really focus upon the sequence of events to really gain some understanding. In this vein the film relates to that of ‘Pulp Fiction,’ as the choppy editing of Buttercup Bill enables the viewer to engage with the film and take something away from it.

This then may be why, despite the horrific undertone of the piece and undeniably unique state of tragedy that lies at the core of the film, viewers can find the film so relatable. After all, it completely destroys and almost ridicules the delicate facade of love being like a fairytale romance. On the contrary, this convention is victimized as much as the ominous third friend as the film contributes to the contemporary idea that romance ceases to exist. Buttercup Bill thus highlights how this is an illusion composed by sex, drugs and psychological trauma, romance having now become something devoid of innocence whilst the idea of star-crossed lovers has been destroyed, the notion now being that it perhaps is indeed better that such people are not together.

I’m an Italian teenager who loves reading books, travelling, live music, sport events. I enjoy living in London for a while, and will be reporting about cool stuff from the capital.

This entry was posted on Wednesday, August 26th, 2015 at 11:00 am and is filed under Movies. You can follow any responses to this entry through the RSS 2.0 feed. Both comments and pings are currently closed.