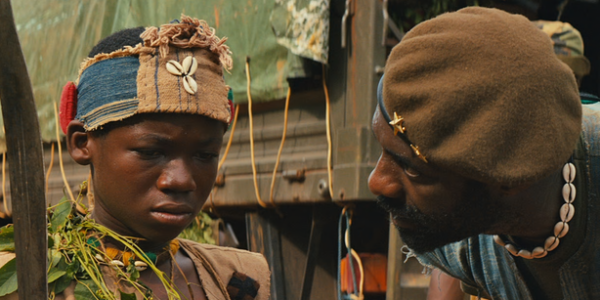 In an unnamed African country, civil war rages.  In an unnamed village, the worst of it has yet to arrive, so the children still have the freedom to play football and sell whatever junk they can to obliging government soldiers.  Then the rebels arrive and all vestiges of childhood are swept away.

It’s the start of a nightmare journey for the young Agu (Abraham Attah) who is captured by the rebels when they overrun his village.  He is forced to fight alongside them and to survive he has to be like the others: follow The Commander (Idris Elba) with unquestioning loyalty, obey orders and fight.  Murder, abuse and blood all become a way of life.

Beasts Of No Nation has attracted attention not least because it’s the first original film content from Netflix, but because of its subject matter.  It takes us inside the world of the child soldier, so be prepared for something tough, if not brutal.  And be prepared for something of an epic.  Not in the Gladiator sense, but because of the universality of its subject: the experiences of the young Agu reflect and echo those of so many children, and not just in the 21st century.  There’s also the sheer length of the movie, a chunky two hours and ten minutes looking at the darkest side of human nature.  It’s a battering, exhausting watch and that’s not just because of the story’s emotional pull.

The pity of Agu’s situation, and that of the other boy soldiers, is heart breaking.  He’s a symbol for all of them, squelching through the water in a World War I style trench, rifle over his back, tin helmet on his head and a cigarette dangling from his lips.  A young boy who looks like a little old man, incongruous and tragic at the same time.  It’s one of the film’s most lingering images.  As is the moment when all these boys who’ve had to behave as adults are rounded up.  We’ve become used to seeing them as soldiers but, as they all put their hands on their heads, we’re confronted by a line of hairless armpits.  They are still just children.

The involvement of Idris Elba as producer, as well as star, has focussed more attention on the film.  His Commander is manipulative, domineering and truly loathesome.  A master of mind games, especially when it comes to keeping young boys in line, he exerts his power physically as well, and in the worst possible way.  But the film belongs to Abraham Attah, the 14 year old non-actor playing Agu.  We invest in him right from the start of the film, allowing him to take us by the hand and guide us through a horrific world and his own shattered life.  Yet, somehow, the vulnerable child is always still there.  It’s a profoundly moving piece of acting. 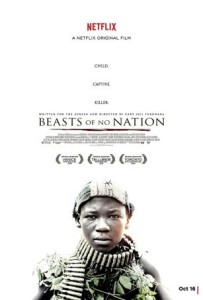 If Beasts Of No Nation has a failing, it’s that it’s a one note film, which is understandable, given its subject matter.  It shows us a living nightmare, one that no child should have to endure, and pulls few punches in doing so.  It’s being talked about as a contender for the forthcoming awards season – it won two trophies at the Venice Film Festival recently – and it’s also set a precedent as the first Netflicks film to be shown at major film festivals.  Its viewing figures and box office takings should make interesting reading.

Beasts Of No Nation is currently screening at the Curzon cinemas in Bloomsbury and Victoria and is also available on Netflix.

Tags:  Abraham Attah Beasts Of No Nation Idris Elba London Film Festival Netflicks Suffragette
This entry was posted on Monday, October 19th, 2015 at 7:00 pm and is filed under Movies. You can follow any responses to this entry through the RSS 2.0 feed. Both comments and pings are currently closed.