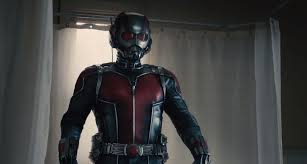 Cat burglar Scott Lang (Paul Rudd) is just out of prison and intends to go straight. It’s the only way he can make sure of seeing his daughter, who lives with his ex-wife and her new boyfriend. But he’s soon tempted to break into a mansion, hoping to find a safe full of money. It only contains a strange suit, which has even stranger powers and he ends up working for its creator, Dr Hank Pym (Michael Douglas), to prevent those powers being used for the wrong reasons.  They mean that a man can shrink to the size of an ant – which means Scott has to become the Ant-Man.

The idea of a super hero the size of an ant doesn’t inspire much in the way of confidence. But think back to last summer. Remember the green woman, the space pirate, the tattooed thug, the raccoon walking on two legs and the tree man? They were the Guardians Of The Galaxy and their irreverent attitude and thumping 80s soundtrack turned them into the surprise hit of the summer. This year could very easily be the turn of Ant-Man.

Not only is he an unlikely super hero, but the actor playing him is an even more unlikely choice. Paul Rudd has been quoted as saying that he never expected to be in a Marvel film because he just didn’t see himself in that mould. Yet he’s the perfect choice for the role, with his affable, everyman quality and knack for comedy. Ant-Man has lots of laughs – more than you would expect – but they’re not in the knowing style of Guardians Of The Galaxy. All the gags, both verbal and visual, are played completely straight. And it works a treat.

Some of the gags are great. The trailer gives you a taster of what is probably the best one, which involves a kid’s train set pulled by Thomas The Tank Engine. At the start of the sequence, it feels like the film is straying into Aardman Animation’s territory, almost parodying the most famous sequence in The Wrong Trousers. But it’s not and the ending is priceless – although I won’t spoil it for you by giving it away. 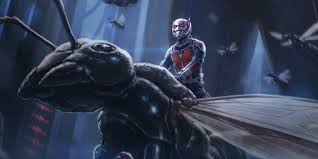 But there’s another reason why Ant-Man works so well, and it’s the most surprising one of the lot. It’s the way it uses 3-D. Just as boredom with the medium has set in, along comes Ant-Man which was actually designed to be made and seen in 3-D. And it really shows. We don’t just see the world through Ant-Man’s eyes once he’s shrunk, we see it in extraordinary detail. When he shrinks for the first time, he’s in the bath and becomes a lot smaller than the plug, labelled as 1½ inches. Not only that, but that everyday bath suddenly becomes threatening once the tap is turned on and the water starts to flow. The world through his diminutive eyes is a revelation – running through carpet tufts or an ordinary turfed lawn – as is the way he leads his army of ants simply through mind control. To make sure their master finds his way safely through a series of water pipes, they turn themselves into a raft. It’s exciting, sharp and technically impressive. 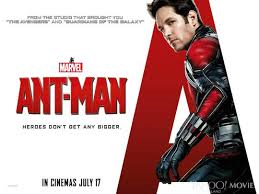 Quite simply, Ant-Man is huge fun and has no pretentions to be anything else. Its combination of charm, humour and spot-on action is irresistible. And if you usually avoid watching films in 3-D, make an exception. Not only was the film made for it, it really is worth it. Then just sit back and enjoy.

Ant-Man is released around the UK on Friday, 19 July 2015 and will be reviewed in the next edition of Talking Pictures on Thursday, 18 July 2015.

Tags:  Aardman Animations Ant-Man Captain America Guardians Of The Galaxy Iron Man Marvel Paul Rudd The Wrong Trousers Thomas The Tank Engine Thor
This entry was posted on Monday, July 13th, 2015 at 11:00 am and is filed under Movies. You can follow any responses to this entry through the RSS 2.0 feed. Both comments and pings are currently closed.