At the Museum of Natural History in New York, Ben Stiller is still security guard Larry, and he’s still working for Doctor McPhee (Ricky Gervais).  Having got used to the exhibits coming to life at night, he uses them as “special effects” to launch an astronomy exhibition.  But the Egyptian tablet that makes them come alive starts to deteriorate, causing total chaos.  To find out why, Larry has to take friendly young Pharoah, Akhmenrah (Rami Malek), to London’s British Museum to get the answer from his parents, who were buried in the tomb.  What he doesn’t realise is that Teddy Roosevelt (Robin Williams) and the rest of the gang  have hitched a ride as well.

The territory is more than familiar, certainly as far as the plot and the characters are concerned.  Yet again, the exhibits in the museum come to life, but this time the location’s shifted to the British Museum, which means some new characters as well. Downton Abbey’s Dan Stevens crops up as a thoroughly British Sir Lancelot and has fun wielding a sword and generally injecting a shot of much-needed energy into the proceedings.  Hugh Jackman puts in a cameo as himself, but playing King Arthur in a stage production of Camelot – and sending up his alter ego of Wolverine!  Yet I couldn’t get rid of the thought that the scene would have been much funnier if it had been set in a production of Spamlalot! 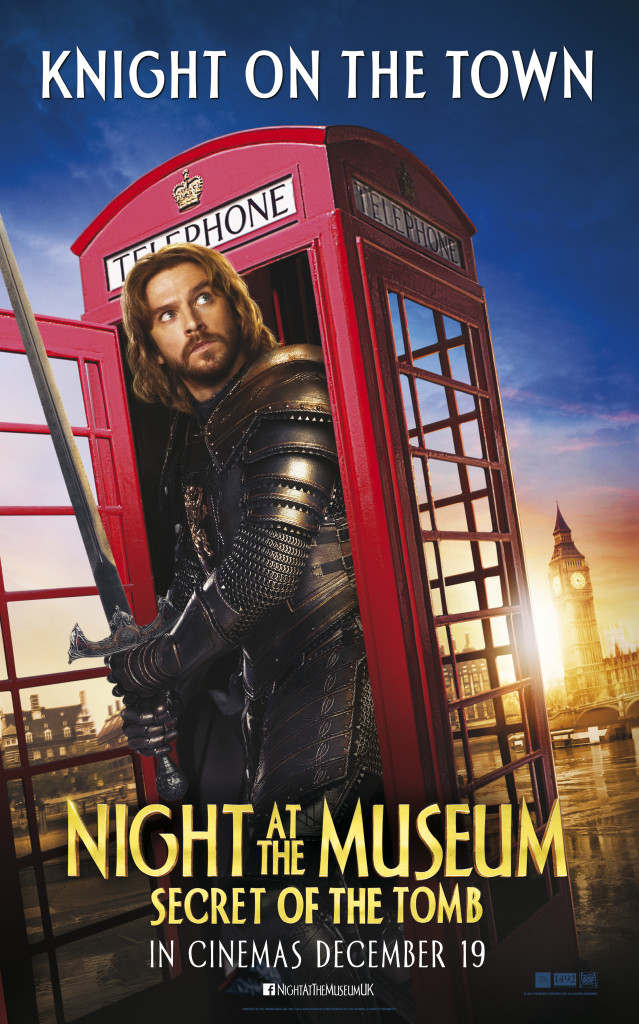 There’s a second new character but one with a familiar face, beneath heavy make-up and shaggy hair.  Ben Stiller is on double duty as a Neanderthal who is convinced Larry is his father and mimics everything he does and says.  All of which makes communication between them more than a little difficult and produces a lot of repetitive scenes, often involving the wild man getting a buzz from an electrical item. 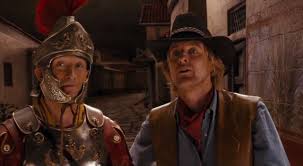 Apart from that, they’re all here – the late Robin Williams as Teddy Roosevelt, Owen Wilson’s mini cowboy, Jed, and the equally diminutive Roman centurion Octavius (Steve Coogan), plus veterans from the first in the series Dick Van Dyke and Micky Rooney (in his last film appearance).  And it has to be said that Van Dyke is still pretty nifty on his feet.  But none of the cast are particularly stretched and appear to be going through the motions.  When the Egyptian tablet makes the “exhibits” go haywire, Williams has the chance to show off his talent for gibberish but it was the sort of thing he could do in his sleep.  Or, in this case, on his horse.

The special effects are reasonable enough, with the dinosaur skeletons as the highlight – the Triceratops in the British Museum is especially good, the “live” Trafalgar Square lions less so.  And the fact that the film is being screened in IMAX just shows this up even more.

Fans of the other Night At The Museum movies could easily feel let down by this one.  It’s just more of the same, except for a couple of new characters and a change in location, and the overall feeling is of a tired idea that’s more than run its course.  That said, the audience at the screening I attended were laughing, but I have a sneaking suspicion not as often or as loudly as the makers would have liked.  Perhaps it’s time to put the museum exhibits to sleep once and for all.

Night At The Museum: Secret Of The Tomb, certificate PG, is released around the UK on Friday, 19 December 2014.

Tags:  Ben Stiller British Museum Camelot Dan Stevens Dick Van Dyke Get Santa Hugh Jackman IMAX Micky Rooney Night At The Museum Owen Wilson Paddington Ricky Gervais Robin Williams Spamalot Wolverine
This entry was posted on Tuesday, December 16th, 2014 at 7:30 pm and is filed under Movies. You can follow any responses to this entry through the RSS 2.0 feed. Both comments and pings are currently closed.