The gala screening of Allied was all about Brad Pitt, the big star of a war drama that sees French national treasure Marion Cotillard co-star alongside him. Allied is in cinemas this Friday 25 November (cert TBC). Audiences long to see for themselves the on-screen chemistry between the co-stars. I am not sure whether they chose to stay apart during the premiere on purpose, but newly separated Brad and pregnant Marion certainly did not seem to have any off-screen chemistry. Off you go to the cinema to watch this old fashion war romance and thriller that I personally liked and believe will appeal more to women than men. 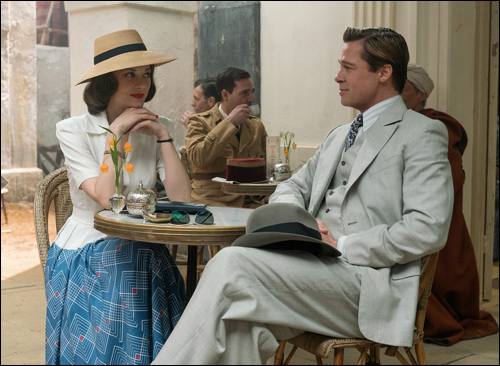 From iconic filmmaker and director, Robert Zemeckis (Forrest Gump, Castaway, Back to the Future franchise), Allied is a spy story about intelligence Canadian airman officer Max Vatan (Pitt), who parachutes into the French Morocco desert in 1942 on special assignment from the British military. In Casablanca, he encounters undercover French Resistance fighter Marianne Beausejour (Cotillard) on a deadly mission behind enemy lines. Together they pose as married Nazi sympathisers, while plotting to assassinate the German ambassador. They fall in love, and reunite in London, where they marry and raise their daughter. Their relationship blossoms in Hampsted in London but is soon threatened by the extreme pressures of the war. I leave you to find out what happens next to avoid spoiling the rest of the story.

When you see the name Robert Zemeckis on a movie poster, you expect a lot from the film. ‘Bob’ (as Brad Pitt was calling Zemeckis at the premiere) is the man behind Back to the Future franchise and certainly knows how to send movie stars back in time.  Allied is a World War II spy thriller with romance and war glamour at the centre of the story. The film might not be too convincing in terms of reconstruction of locations and historical facts but it certainly pays tribute to old fashioned Hollywood movies in style. The beautiful and talented cast obviously helps. The on screen chemistry between Brad and Marion is real and Marion told the audiences at the gala screening that she had three weeks with Brad to prepare and work on their performances before shooting, which is a lot of time and not normally available to actors. The steamy love making scene in the car during a sand storm in the middle of the desert is very convincing and led to the media to speculate that Brad and Angelina’s divorce was caused by Brad’s presumed affair with the French actress. But Marion quickly dismissed the false claims and displayed a baby bump declaring her unconditioned love for her husband.

40s fashion is very well represented and some of the original costumes were displayed at the premiere. 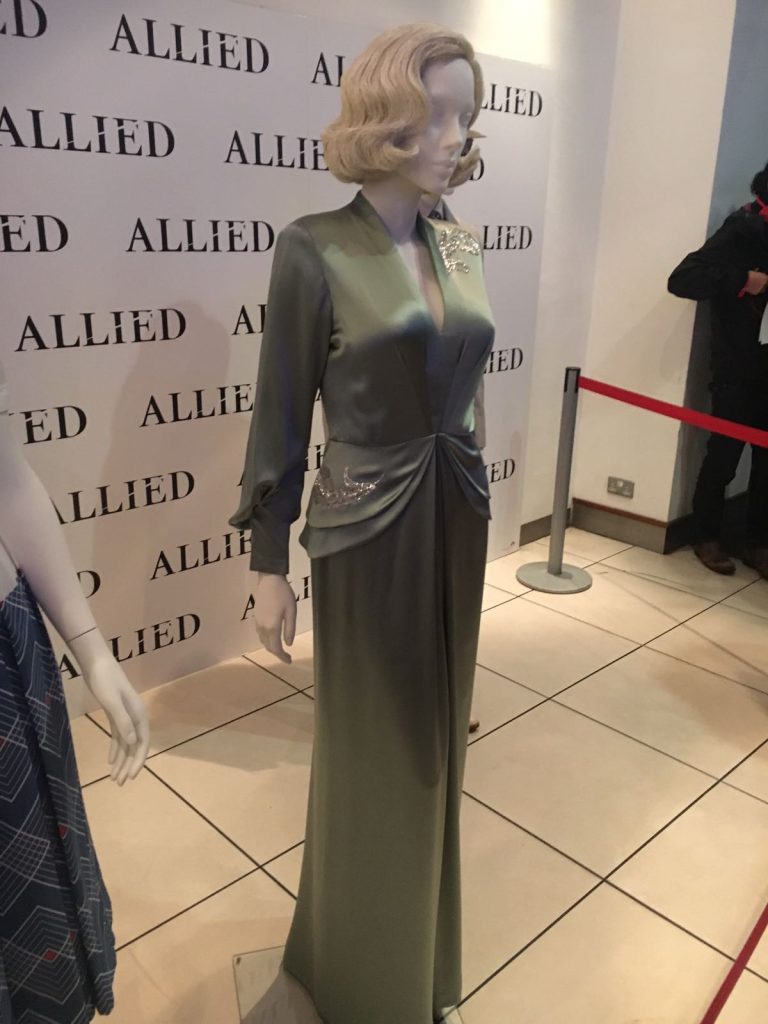 The green silk dress Marion wears on the night of the murder at the German embassy is stunning. 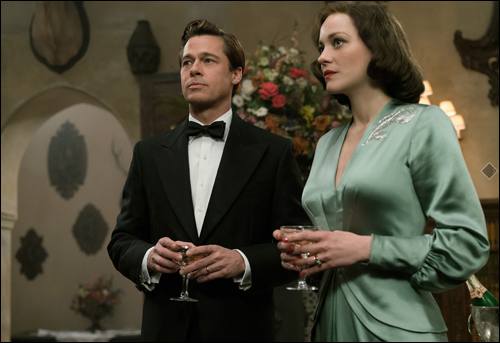 The retro 40s revival transpires in vintage clothing, vehicles, luggage, extravagant chandeliers, London during the blitz, the Spitfires. The list is endless. 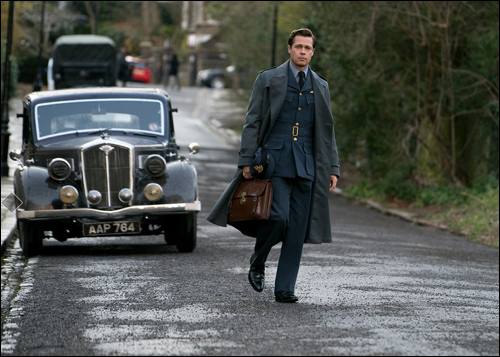 At times Allied reminded me of a Hitchcock film: the suspense and the twists in the characters whose identities and backstories we believe at first. These are elements of old thrillers that are often lost in big blockbusters these days where special effects overtake the story. Ultimately Allied has a good story.

Brad Pitt has been critised for his flat performance in this movie, but he’s not playing an eccentric role here so his character is supposed to be a bit flat as a military officer. I personally like him in this film and he’s extremely good looking with his hair dyed to make him look younger. In fact, as a non Brad Pitt fan overall, I have re-discovered him in Allied.

This is a film to go and watch with girlfriends who will certainly appreciate the love story, the fashion and the good looks of the stars. Not a bad Christmas movie at all. 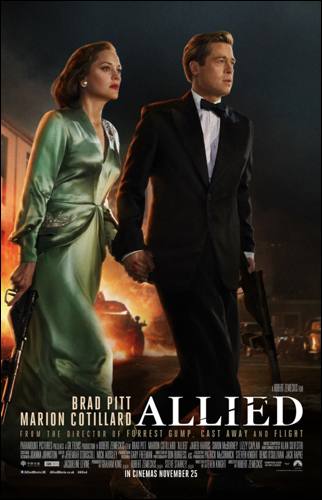 This entry was posted on Tuesday, November 22nd, 2016 at 1:05 pm and is filed under Movies. You can follow any responses to this entry through the RSS 2.0 feed. Both comments and pings are currently closed.