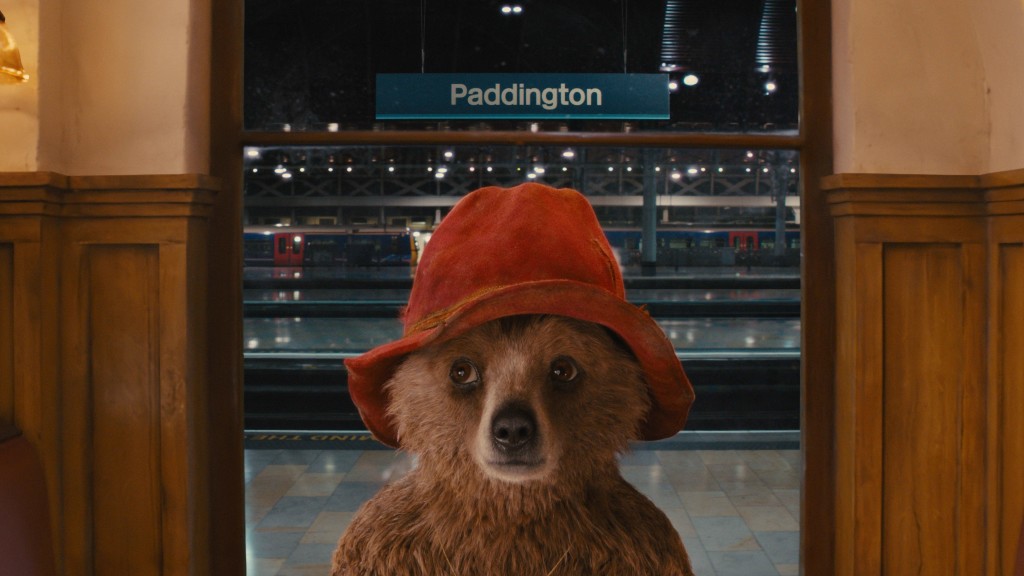 The original Paddington stories by Michael Bond were comparatively short, so the makers of the big screen version have had to expand on them.

Once we’ve seen Paddington’s (voiced by Ben Wishaw) early years in Darkest Peru, an earthquake prompts him to stow away to London.  The explorer who discovered him, his aunt and his uncle told him to expect a warm welcome, but he doesn’t get it.  Until he meets the Brown family, who take him home, initially for one night.  As his stay with them lengthens, they investigate his story, but he also attracts the attention of an evil taxidermist (Nicole Kidman), coincidentally the daughter of the very same explorer.  And then the family has to rescue him from her clutches.

Paddington is a national treasure.  His first story was published in the late 1950s so plenty of the parents going along to see this will have grown up with him or, at the very least, read some of the books.  He comes with that familiar label, “Please look after this bear” and there’s one scene that shows the extent to which director Paul King has taken those instructions on board.  As Paddington heads for the Brown’s home for the first time in a taxi, an elderly gentleman at the roadside raises a glass to him.  It’s Michael Bond himself.  It says it all.

But this is 2014, so we’ve moved from a hand-drawn Paddington to a CGI one and, with Oscar winners Framestore on board, you expect something special.  Visually, he’s certainly a Paddington for the 21st century, with fur that you could happily stroke.  Yet he still remains endearing and good natured, but terribly clumsy, which gets him into trouble by the tonne and creates many of the laughs.  Plus, although he can speak, he’s still a bear in a human world and clueless about a most of it.  Cue even more affectionate laughter.

That humour is enormously important to the film and comes in all shapes and sizes.  There’s the physical, such as Paddington’s antics in the Brown’s bathroom which culminate in him sailing down the spiral staircase in the bath on a tidal wave of water.  Or the nostalgic, almost Pythonesque, style of the opening sequences in Darkest Peru, telling how the young Paddington and his aunt and uncle were discovered by an explorer.  They’re priceless!  There’s even the more obscure plaster of Paris foot at the bottom of that spiral staircase.  And that, according to the director, is because it’s the foot of the stairs!

Paddington isn’t the only national treasure in the movie.  The cast is crammed with them. There’s Julie Walters as Mrs Bird the housekeeper, a less wobbly Mrs Overall with a Scottish accent.  Jim Broadbent as the German refugee, Mr Gruber, who runs an antique shop.  And there’s the wannabe treasures, like Hugh Bonneville as the uptight Mr Brown who turns out to have hidden depths.  Doctor Who himself, Peter Capaldi, as the Brown’s grumpy neighbour.  And Matt Lucas, complete with gold front tooth, as a garrulous taxi driver – with all the cabbie clichés you’d expect! 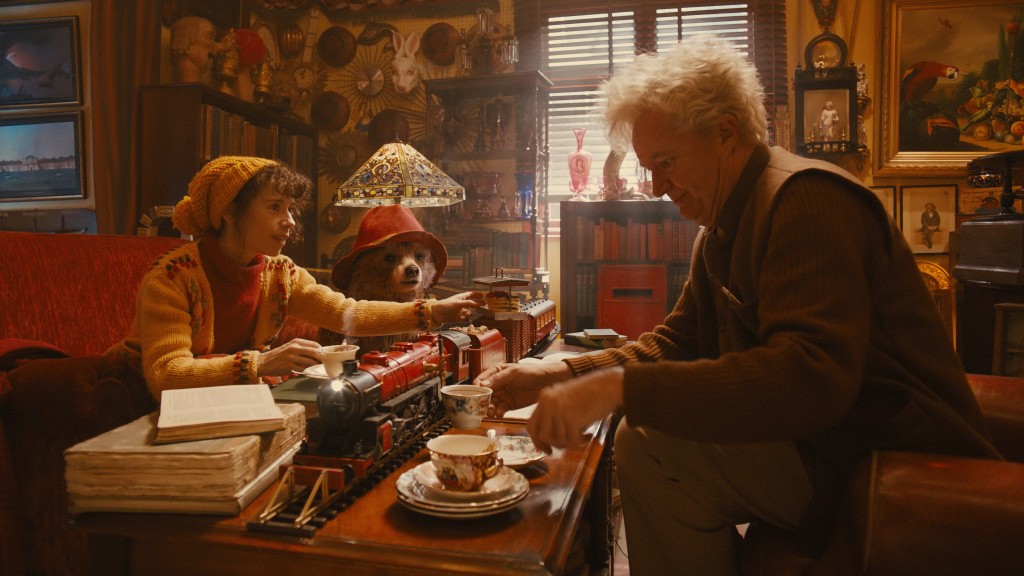 It may not be covered with tinsel or bedecked with holly but, so far, Paddington is the best of this year’s seasonal offerings at the cinema.  And its theme of homelessness and a stranger in strange land is more than appropriate for this time of the year.  The combination of joyous humour and affection for the original stories, plus the fact that it will appeal to all ages, makes it a perfect family festive film.

Paddington is released around the UK on Friday, 28 November 2014.

There’s more on the Paddington Trail at www.visitlondon.com/paddington

Tags:  Ben Wishaw Doctor Who Hugh Bonneville Jim Broadbent Julie Walters Matt Lucas Michael Bond Mrs Overall Nicole Kidman nspcc Paddington Paddington Trail Peter Capaldi
This entry was posted on Tuesday, November 25th, 2014 at 7:11 pm and is filed under Movies. You can follow any responses to this entry through the RSS 2.0 feed. Both comments and pings are currently closed.