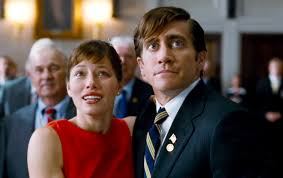 Alice (Jessica Biel) is a roller skating waitress at a small town diner with a motorcycle cop boyfriend. On the night he proposes, an accident leaves her with a nail stuck in her head but, with no medical insurance, the hospital refuses to remove it. It affects her behaviour and ruins her relationship. But when she sees a new Congressman, Howard Birdwell (Jake Gyllenhaal) on TV, saying that he wants to help everybody, she heads for Washington, hoping can change the law to help people in her predicament.

This is a film with a back story all of its own, one of arguments, money shortages, far too many scriptwriters and a director who eventually walked away. And you can’t blame him.

Is it a rom-com? No. Despite the poster and the trailer, both of which are designed to make you think it’s one big romance, the love stories only have a small part to play in the film. There’s the obvious one between Alice and the Congressman, and there’s another involving one of her hangers-on, Keyshawn (Tracy Morgan) and security guard Rakeesha (Malinda Williams). But they’re all essentially sidelines. 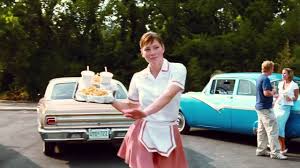 It is a satire? No. Its portrayal of political shenanigans in Washington looks like a cartoon version of The West Wing. The Deputy Speaker (Catherine Keener) is an ex-astronaut, with a bee in her bonnet about promoting a manned based on the moon and Gyllenhaal’s naïve Congressman wants to make sure that every school has coloured glue. It’s all done so clumsily that every potential barb is just way off target.

Is it a black comedy? No. Because it doesn’t know the difference between that and tasteless. Alice isn’t the only one with a medical problem. Hers is crude and unfunny and the ones suffered by her hangers-on are even worse. And there are some moments in the film that seriously overstep the mark. You have been warned! 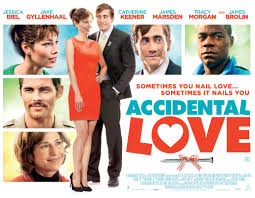 Accidental Love is such a dreadful misfire that you wonder what the usually excellent Jake Gyllenhaal is doing in it. From the look on his face, he probably thought the same. It’s risible rather than funny and a complete must-avoid.

Accidental Love is released in cinemas on Friday, 19 June 2015.

Tags:  Accidental Love Catherine Keener David O Russell Jake Gyllenhaal Jessica Biel
This entry was posted on Friday, June 19th, 2015 at 12:29 pm and is filed under Movies. You can follow any responses to this entry through the RSS 2.0 feed. Both comments and pings are currently closed.