StudioCanal have just unveiled the very first trailer and poster for brand new family film ROBINSON CRUSOE, which arrives on UK shores with May Bank Holiday 6 May 2016. From the makers of The House of Magic and A Turtle’s Tale, ROBINSON CRUSOE seems to be a fun-filled adventure in eye-popping 3D for the whole family to enjoy. We cannot wait to see the bunch of all these adorable animals on an exotic desert island on the big screen. It will be great for our kids to learn about this story which parents grew up with (or at least I did). When I was a young girl, the only film about Robinson Crusoe was by Luis Buñuel from 1954. It was time for an animation movie to cover this adventure in a more child friendly way. 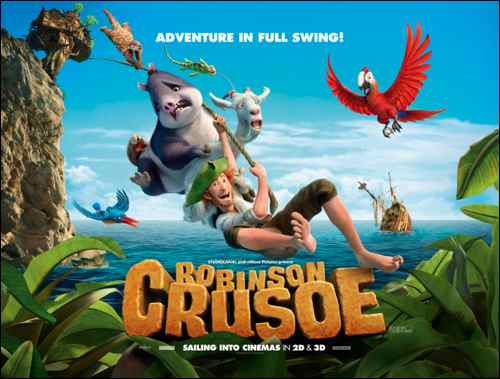 On a tiny exotic island, Tuesday, an outgoing parrot, lives with his quirky animal friends in paradise. However, Tuesday can’t stop dreaming about discovering the world. After a violent storm, Tuesday and his friends wake up to find a strange creature on the beach: Robinson Crusoe. Tuesday immediately views Crusoe as his ticket off the island to explore new lands. Likewise, Crusoe soon realizes that the key to surviving on the island is through the help of Tuesday and the other animals. It isn’t always easy at first, as the animals don’t speak “human.” Slowly but surely, they all start living together in harmony, until one day, when their comfortable life is overturned by two savage cats, who wish to take control of the island. A battle ensues between the cats and the group of friends but Crusoe and the animals soon discover the true power of friendship up against all odds (even savage cats).

This entry was posted on Sunday, March 27th, 2016 at 11:05 am and is filed under Movies. You can follow any responses to this entry through the RSS 2.0 feed. Both comments and pings are currently closed.