From the look of it, May 2016 will be remembered for one of the months with most film releases this year. There’s one film in particular that caught my eye, FLORENCE FOSTER JENKINS from acclaimed British director Stephen Frears (Philomena, The Queen) and starring Oscar winner Meryl Streep alongside British icon Hugh Grant and The Big Bang Theory’s hilarious Simon Helberg. This is the type of feel good film that London Mums need to relax after an intense week with children’s routines. I bet I will love it not just for the extraordinary cast but also for the inspiring true story of the self confident (I’d say overconfident at times) New York socialite who pursues her dreams. FLORENCE FOSTER JENKINS will be released in UK cinemas 6th May 2016. 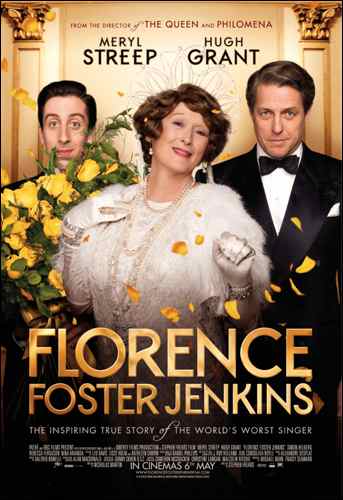 The comedy drama directed by Stephen Frears (Philomena, The Queen) tells the inspirational true story of the eponymous New York heiress who obsessively pursued her dream of becoming a great singer. The film celebrates the human spirit, the power of music and the passion of amateurs everywhere. The voice Florence (Streep) heard in her head was divine, but to the rest of the world it was hilariously awful. At private recitals, her devoted husband and manager, St Clair Bayfield (Grant), managed to protect Florence from the truth. But when Florence decided to give her first public concert at New York’s Carnegie Hall, St Clair realised he had perhaps bitten off more than he could chew.

This entry was posted on Tuesday, March 22nd, 2016 at 11:06 am and is filed under Movies. You can follow any responses to this entry through the RSS 2.0 feed. Both comments and pings are currently closed.