DVD Review: The Tale Of The Princess Kaguya

That all-important life lesson about the balance between happiness and sadness comes to the fore this week on both the small and big screen. I’ll come on to the big screen in a few days’ time when Disney Pixar’s Inside Out is released. In the meantime, Japanese animators Studio Ghibli have just brought out the DVD version of their Oscar nominated The Tale Of The Princess Kaguya, which has a U certificate. And, as London Mums’ film critic Freda Cooper finds out, it’s closer to a European film than you might expect. 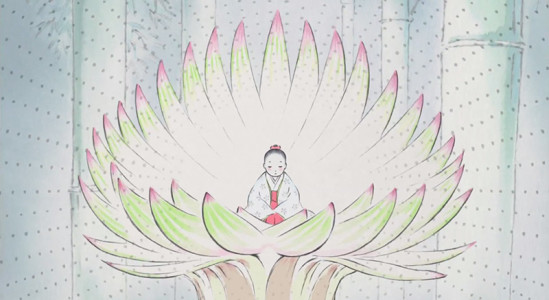 An elderly bamboo cutter discovers a baby in a bamboo stem. He and his wife raise the little girl as their own, but she’s noticeably different to all the other local children: she grows unusually fast and has a strong affinity with the animals and insects. The bamboo forest where she came from still has a hold over her, as her father discovers gold when he cuts into another stem. A lot of gold. This, he believes, is a sign that the daughter he calls Princess is meant to be brought up as one. He builds her a palace, employs a tutor to teach her all the attributes of a noblewoman and wants her to marry well. All he wants to do is make her happy, but he doesn’t. And it doesn’t make him or his wife happy either.

Despite being based on a classic Japanese folk tale, the film has strong parallels with European fairy stories and religion. It’s no wonder that its cinema release was greeted with enthusiasm all over the world. This DVD version comes with two discs, echoing its cinema release: one is in Japanese with English sub-titles, the other voiced in English by an American cast. The latter is the more accessible and includes some familiar names, like Chloe Grace Moretz, whose voice is a good fit for the princess. But they are most definitely American and are more than a little at odds with the very Japanese images on the screen. Unfortunately, it’s a distraction that never quite goes away. The subtitled version may feel more authentic, but reading captions on the screen comes with its own problems. 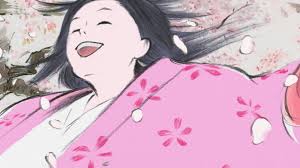 But this is a film all about images and that’s what lingers in the memory. There’s no special effects as such, no 3-D, just the purest, hand drawn animation done with such love and care that it’s impossible to escape those feelings as you watch, even on the small screen. It’s a truly exquisite feast for the eyes, like watching a living, breathing watercolour: some settings – the moon’s reflection on the lake, the pouring rain – are so realistic you could reach out and touch them. And the broader landscapes are equally stunning.

There’s more. The colour palette changes with Kaguya’s mood: when she gets angry and runs away, the film turns monochrome and is drawn in a rough, almost harsh charcoal. It’s a breath taking testament to the artists involved that it all works so beautifully on the small screen as well as on the big one. 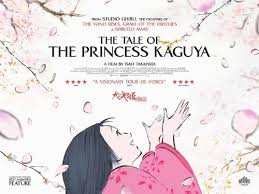 Despite its U certificate and fairy tale story, The Tale Of The Princess Kaguya isn’t really for young children: there’s too much dialogue and not enough action. But for anybody over 12 and adults of all ages, it’s overflowing with beautiful images, a gentle simplicity and a story that will touch everybody’s heart. And as for the animation – well, I’ve run out of superlatives!

The Tale Of The Princess Kaguya is currently on release on DVD.

This entry was posted on Wednesday, July 22nd, 2015 at 11:00 am and is filed under Movies. You can follow any responses to this entry through the RSS 2.0 feed. Both comments and pings are currently closed.