The story of Richard III is fascinating and The Lost King – out on DVD now and based on non-fiction book by Philippa Langley – is a very enlightening movie, because it opposes the legend of a crippled and cruel usurper monarch that immortalised him as one of Shakespeare’s greatest villains.

The Lost King is the remarkable true story of how one ‘ordinary’ woman overcame every obstacle to track down the final resting place of Richard III. 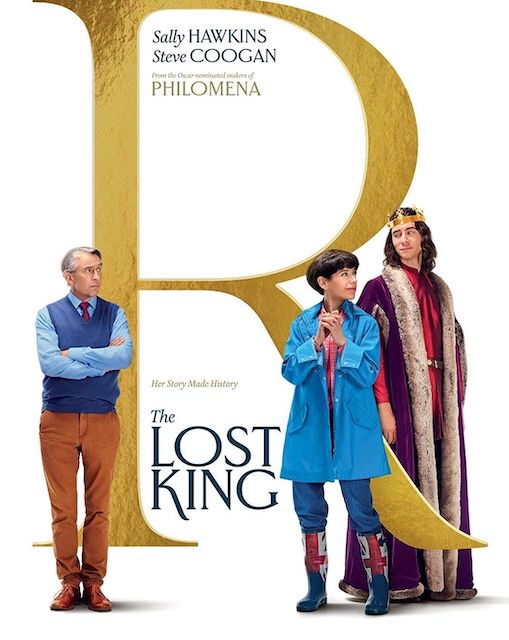 In 2012, having been lost for over 500 years, the remains of King Richard III were discovered beneath a car park in Leicester.  The search had been orchestrated by an ambitious writer  and amateur historian, Philippa Langley, whose unrelenting research had been met with incomprehension by her friends and family and with scepticism by experts and academics.

Sally Hawkins’ character feels haunted by the ghost of the lost king. Guided by instinct and spectral visions, she defies the academic establishment to unearth Richard III’s long-missing remains in a Leicester car park.

The Lost King is the life-affirming story of a woman who refused to be ignored and who took on the country’s most eminent historians, forcing them to think again about one of the most controversial kings in England’s history.

British writer Philippa Langley was curious about the distorted portrayal of Richard III in conventional history as well as Shakespeare’s drama. She felt it was cruel to present him as a wicked person simply because he had a physical impairment, his scoliosis.

As a result, she joined the Richard III Society to learn more about Richard III’s history. Steve Coogan and co-writer Jeff Pope took creative liberty in depicting Langley’s mental turmoil and showed her in the film having visions of the lost king. Her journey to find the remains of King Richard III is the story of her brave fight for justice and self-affirmation as well as restoration of the misjudged King’s fame. Without her intuitions  and passion for the truth, we would not know what really happened to the English king.

The Lost King is a film that everyone should know about, including school children.

After recording her research in her book, co-written by John Ashdown-Hill, Finding the Richard III: Official Account of Research by the Retrieval and Reburial Project in 2014, Philippa launched a campaign that resulted in the Royal Family naming Richard III as the Rightful King of England from 1483 to 1485 on their website. Prior to that he was considered an usurper and not listed in Royal history books. In 2015 Philippa was awarded an MBE by the Queen for her remarkable studies and hard work as a social activist. At the end of the movie, we see original TV footage of the state funeral which was granted to the king like to all defunct monarchs.

Things we’ve learnt about Richard III since he was found

Richard III was not hunchbacked.

Up until 2012 we only knew Richard III as the cruel, nasty Shakespeare’s villain, with physical abnormalities, a “poisonous bunch-backed toad.” History was written by the victors, the Tudors, and their most famous playwright, so Richard was portrayed as hunchbacked, “deformed, unfinished … and that so lamely and unfashionable that dogs bark at me as I halt by them.”

For the archaeologists who run tests on the skeleton, the King suffered from adolescent-onset scoliosis. The disability would not have been obvious in Richard III when he was alive. It would have meant his right shoulder was slightly higher than the other, but this was disguised by clothing, and so only apparent to the King’s closest family and confidantes.

He was killed by a blow to the head.

Richard III was the last English King to die in battle, at Bosworth on August 22, 1485.

He had great leadership skills and cared about a fairer society.

500 years ago Richard III introduced the concept ‘innocent until proven guilty’. He also introduced forward-thinking legislation aimed at benefiting a large proportion of the population. The fact that some of his laws were beneficial to the most vulnerable in society, offering little in the way of political or personal gain for himself, paints a very different picture of the much-maligned king. It seems fair to say that Richard III was a man who held justice and fairness in the law for all men very close to his heart.

There have been 500 years of lies about this king. Lies about the hunchback attributed to him. The Tudors who came after him, Henry VII, for instance, wanted to speak badly about their predecessor.

Philippa ensured past records about Richard III including the usurpation of the throne were cancelled and he was included as a rightful member of the English Royal family.

This entry was posted on Monday, December 12th, 2022 at 10:01 am and is filed under Movies. You can follow any responses to this entry through the RSS 2.0 feed. You can skip to the end and leave a response. Pinging is currently not allowed.