Hilarious and wacky family film Nine Lives starring Kevin Spacey and and Jennifer Garner is released on Blu-ray & DVD today. London Mums have watched the movie while enjoying a Cats’ Protection Hamper filled with a lot of fun goodies and have come up with a verdict. Trump haters will probably dream while watching what happens to a New York millionaire living in his own eccentric world. A great film to watch over Christmas. Merry Cat-mas!! 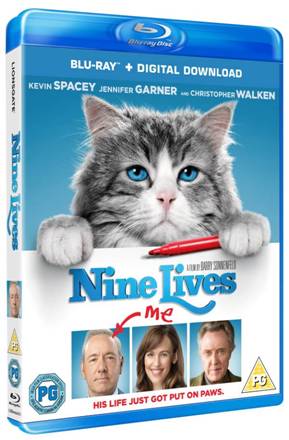 Check below London Mums’ review as well as these cats’ related features:

Care For Your Cat – How you should best look after your cat.
Cool Cat Facts – Some interesting and surprising facts about cats.
How to speak Cat – Explaining all the ways your cat is trying to communicate with you.

Nine Lives is the story of Tom Brand (Kevin Spacey) a daredevil billionaire businessman who finds himself trapped inside the body of his family’s cat.

Tom Brand is a daredevil billionaire at the top of his game.  His eponymous company FireBrand is nearing completion on its greatest achievement to date – the tallest skyscraper in the northern hemisphere. But Tom’s workaholic lifestyle has disconnected him from his family, particularly his beautiful wife Lara (Jennifer Garner) and his adoring daughter Rebecca (Malina Weissman).

Rebecca’s 11th birthday is here, and she wants the gift she wants every year, a cat. Tom hates cats, but he is without a gift and time is running out. His GPS directs him to a mystical pet store brimming with odd and exotic cats- where the store’s eccentric owner- Felix Perkins (Christopher Walken), presents him with a majestic tomcat, named Mr. Fuzzypants. 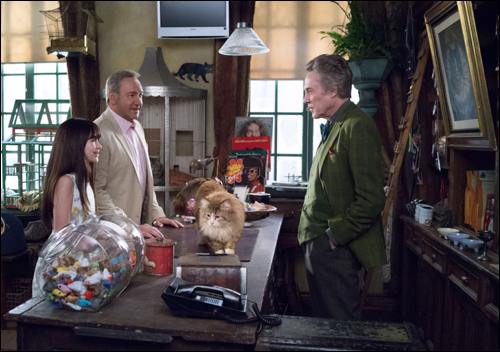 En route to his daughter’s party, Tom has a terrible accident. When he regains consciousness he discovers that somehow, he has become trapped inside the body of the cat. Adopted by his own family, he begins to experience what life is truly like for the family pet, and as a cat, Tom begins to see his family and his life through a new and unexpected perspective. Meanwhile, his family adjusts to life with an odd and stubborn cat, and his son David (Robbie Amell), steps up in ways Tom never expected. 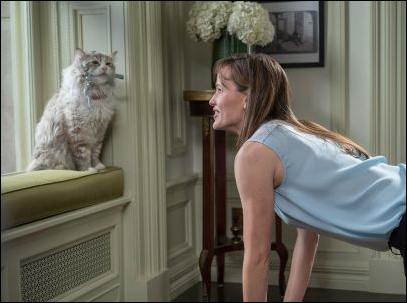 If any hope exists of returning to his family as the husband and father they deserve, Tom will have to learn why he has been placed in this peculiar situation and the great lengths he must go to earn back his human existence.

Kevin Spacey is exceptional as always so versatile in his amazing acting career but he is in the film as fully functional only for the first 20 minutes and again at the end. Spacey is mainly voicing the cat.

The best performance comes from Christopher Walken who stars as the cats’ shop owner. His brilliantly scary look is a hint on what is to come in the rest of the movie. I love him and I guess the film wouldn’t be the same without him.

Nine Lives is a decent family comedy but when landed in cinemas in early August many families ignored it because it was in the middle of the Summer and Disney had just released amazing films.

Although we have seen similar features with the theme of mind transportation before like in Freaky Friday, here the emphasis is on the greatness of the leading actors two-time Oscar winner Spacey as the sarcastic businessman who doesn’t spend much time with his family, who ends up totally frustrated in the cat’s body (the fact that he hates cats doesn’t help), and Christopher Walken who conjures with the animals to teach Spacey/Brand a life lesson. 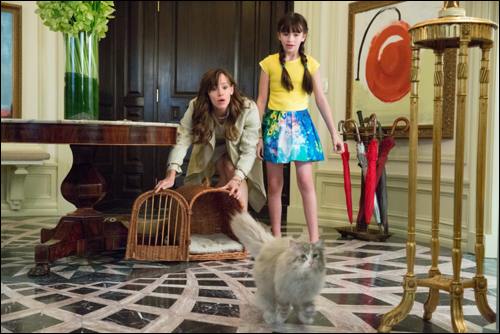 This movie is more suitable for 8+ children due to a few accidents and conversation that younger kids would not understand or would be scared about.

Letting the Cat Out of the Bag: The Making of Nine Lives
Cat Bloopers
Herding Cats

Cats are curious creatures and can behave quite oddly. A perfect example is Mr. Fuzzypants in Nine Lives, and to celebrate the release we’ve compiled a list of facts courtesy of Cats Protection that can help you determine if you’ve brought home a typical feline or your dad in disguise!

SLEEP – Cats sleep upwards of 15 hours a day! You’ll know your furry friend is a true feline if they laze about a good portion of the day and expend their energy in bursts nearer dawn and dusk as that is when they typically hunt.

KNEADING – Cats knead or paw at the ground when they are happy in a habit leftover from kittenhood, so be wary if your kitty doesn’t do this!

TOMS AND QUEENS – A male cat is often referred to as a ‘Tom’, while a female cat is called a ‘Queen’.

HEARING – Cats can hear sounds up to 77,000 Hertz, even higher than dogs and much higher than humans. Most cats will respond to noises their owners can’t hear.

LANDING ON THEIR FEET – All cats carry an incredible ability to right themselves in mid-air and turn to land on their feet when falling. Handy for learning to climb trees!

HEIGHTS – Cats like finding high perches where they can survey their surroundings from above. Cats Protection suggests making sure your cat has access to resting places that give it a good view of the rest of the room.

HEAD RUB– Cats say hello to each other by rubbing their heads or side of their bodies on each other, so if your cat attempts to shake your hand it’s probably not your ordinary feline.

SUNBURN – Cats can sunburn! Most cats love to laze in the sunshine, but light-haired cats especially are susceptible to sunburn! So if you see a cat sporting sunscreen on their ears and nose, they probably just have caring owners and aren’t really humans in disguise. Cats Protection suggests asking a vet for recommended non-toxic creams that are safe for furry felines. 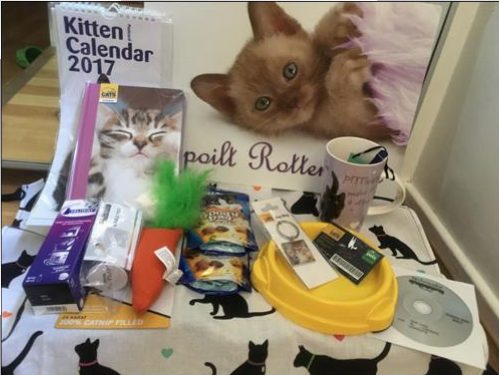 How to Speak Cat

Cats are notoriously independent creatures, so it shouldn’t be a surprise that they have a language all of their own. So how do you decipher all the strange ways your cat is trying to communicate with you? In Nine Lives, Kevin Spacey as Tom Brand/Mr. Fuzzypants acts in a number of strange ways. We’ve put together a paws-on guide to deciphering all the ‘weird’ behaviours of our feline friends also courtesy of Cat’s Protection, the UK’s leading cat welfare charity.

If your kitty is rolling over, and exposing their belly when they see you, they’re not asking for a tummy rub and they probably haven’t got into the liquor cabinet like Mr. Fuzzypants. Cats do this as a way of saying hello, showing they trust you and asking for a bit of a head scratch!

Although it can look quite odd, cats often paw or scratch at the ground after they eat. Cat’s Protection explains it’s a leftover caching behaviour from a time when cats would bury leftover foods to consume later. However, if your cat turns out to really be your dad they’re probably just missing mum’s cooking.

Some cats are more energetic than others, but most cat owners will recognize a specific behaviour in their furry friends in which they go a little crazy. While most cats probably won’t run as wild as Mr. Fuzzypants when he first arrives home and does everything he can to tell his family who he is, they will need to expend some of their energy. Often they do this in the form of running around, usually near dawn or dusk as that is when they would naturally hunt their prey.

When cat’s first arrive home, they have a lot of work to do ‘training their humans’. One of the ways they do this is through different types of ‘meows’, each of which will mean something different. Too bad for Mr. Fuzzypants there isn’t a meow for ‘Help, I’m your dad’! For most cat owners it’s just a matter of learning to differentiate the different ways your cat communicates.

How to Care For Your Cat

Bringing home a new pet is exciting, but it can be a stressful change for your adopted friend, just ask Mr. Fuzzypants! When workaholic Tom Brand brings a cat home for his daughter’s birthday, an accident leaves him trapped in the feline’s body. So whether you are a first time cat owner, a cat connoisseur, or have suddenly found yourself stuck in the body of a cat like Tom in Nine Lives, we have some helpful hints for caring for your new feline courtesy of Cats Protection.

Set Up The Essentials

Set up your new cat in an area safe for your kitty. Provide separate bowls for food and water, a litter box placed as far as possible away from the food and water, a scratching post, and a choice of places for them to sleep and hide. Cats like high areas where they can see their surroundings, so make sure they have somewhere to perch. Cats Protection suggests you continue to feed your cat their previous diet, unless of course your cat previously ate human food like Mr. Fuzzypants; many foods meant for people can make cats sick and unwell.

When you first bring your adopted friend home, set them up in a quiet room with their resources, to help them settle in. Once they are settled let them explore their new environment on their own before you introduce yourself. Cats are independent creatures and like to do things in their own time. Some cats may be eager to get your attention, especially if like Mr. Fuzzypants, they’re trying to tell you they’re really your dad! But others may be shy and prefer to hide, in which case Cats Protection suggests you try to coax them out with an interactive toy.

Introduce your cat to the family slowly. Don’t pick them up until they know you are not a threat, and don’t push your cat into interacting too quickly. Be patient and you’ll be best of friends with your feline friend in no time!

When your cat first arrives home it needs time to settle into its new surroundings. Cat’s Protection recommends that you keep your kitty indoors for the first 3 or 4 weeks while they adjust. Otherwise who knows what trouble they might get up to!

Let them be themselves

Cats vary widely in personality, from lap cats to avid hunters but all of them can make for loving companions if given the space and correct environment to be themselves. If you are adopting a cat from a rescue home or agency like Cats Protection talk to a member of staff or volunteer there to make sure you are matched with a suitable cat. Just be wary of any mystical cat-shop owners who may be planning on turning you into the cat you’ve just adopted…

This entry was posted on Monday, December 12th, 2016 at 11:57 am and is filed under Movies. You can follow any responses to this entry through the RSS 2.0 feed. Both comments and pings are currently closed.