Mother’s Day is star-studded film which sees some of the best comedy actors and actresses along with the legendary rom-com director GARRY MARSHALL (Pretty Woman, Beaches, Overboard) come together to bring a feel-good and funny movie celebrating motherhood in all stages of life. It’s a sweet and moving tale of family life and out to download and on DVD 3rd October 2016. Read below for London Mums’ review of the DVD. 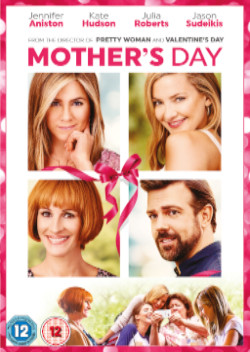 There are only a few days left before Mother’s Day and several families have to come to terms with how they’ll be spending the big day. Whether it’s dealing with a new love, a lost love, or no love at all, this Mother’s Day will prove to be unforgettable!

Academy Award® winner JULIA ROBERTS, JENNIFER ANISTON and KATE HUDSON are all mothers who are not understood by their respective families. Throughout the film they come to terms with their situations and resolve their confidence issues so much so that they eventually end up being as happy as ever.

Usually star-studded movies are a bit disappointing as film makers try to compensate the lack of brilliance in the script with great performers. They often forget that the story is the main star. Despite being directed by Pretty Woman‘s mastermind GARRY MARSHALL, Mother’s Day is a bit like that. It can be labelled in the same  category of celeb-a-thon classics New Year’s Eve and Valentine’s Day, which are also not my favorite rom coms ever but still enjoyable and watchable even a few times.  Mother’s Day is a tale of modern motherhood in 2016, which includes a 20-something stepmother, married lesbian couples, and a young widower who finds himself buying tampons for his teenage daughter.

Needless to say that the cast is exceptional:

Jennifer Aniston (Marley and Me, Friends), has the charm of the lady-next-door a bit like Rachel in Friends.

Julia Roberts (Pretty Woman, Runaway Bride,  Erin Brockovich, Notting Hill and My Best Friend’s Wedding) is a rom-com legend who plays the role of career-centric presenter Miranda, who reunites here with Pretty Woman director Garry Marshall. She never disappoints and at the end she even wears a stunning red dress which is a dream for every 40 something fashionista.

Kate Hudson (How to Lose a Guy in Ten Days) is a friend of Jennifer Aniston’s character Sandy, who has problems with her mum and tries to sort them out throughout the movie.

Britt Robertson, who played a teenager in Tomorrowland alongside George Clooney, usually plays characters much younger than she is. Here she is a 20 something mum whose comedian boyfriend is played by nonetheless Jack Whitehall. He adds a tiny bit of British humour to the mix but fails to shine as he would normally do on a comedy show probably limited by a poor script.

Mother’s Day is out to download and own from 3rd October 2016. www.lionsgatefilms.co.uk

This entry was posted on Tuesday, September 27th, 2016 at 1:06 pm and is filed under Movies. You can follow any responses to this entry through the RSS 2.0 feed. Both comments and pings are currently closed.