DuckTales – The Gang’s all here! London Mums go behind the scenes with the cast

Danny Pudi, Ben Schwartz and Kate Micucci are the voices behind three quack-tacular characters in Disney’s DuckTales. London Mums have caught up with the talented trio for the loony lowdown on bickering brothers and barmy banter inside the recording booth… Woo-oo! When Disney offered me the opportunity to feature this exclusive Ducktales interview I had to say yes because my 11 year old son Diego is a huge fan of the show, having watched the past seasons millions of times (no joke!) – I obviously did too! Not just that… I was an avid reader of the Toppling comics throughput my childhood and my son followed in my footsteps. I feel totally honoured and I am happy with this lovely interview.

How would you describe DuckTales? 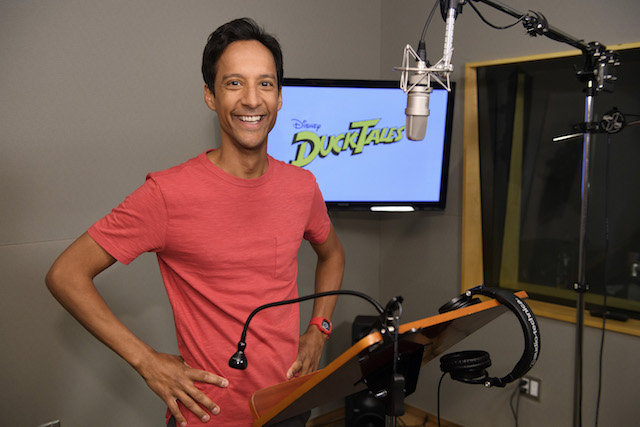 DANNY PUDI: I like to describe DuckTales as a cross between Indiana Jones and Modern Family. It’s a comedy about a family who go on these epic adventures together, but the youngsters are constantly bickering. They are constantly fighting one another, but they also have so much fun together. It’s crazy!

How did you become involved with the show? 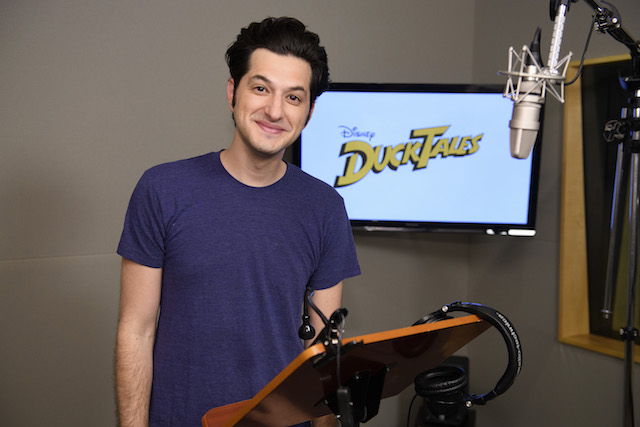 BEN SCHWARTZ: I voiced a character on a Disney animated show called Randy Cunningham: 9th Grade Ninja. When that show ended, someone told me there was a chance that Disney was going to reboot the ‘80s cartoon, DuckTales, and I got really excited. I auditioned, just like everybody else, but I was ecstatic to be in the mix for one of the roles.

How did you react when you discovered you were going to be a voice in the new series? 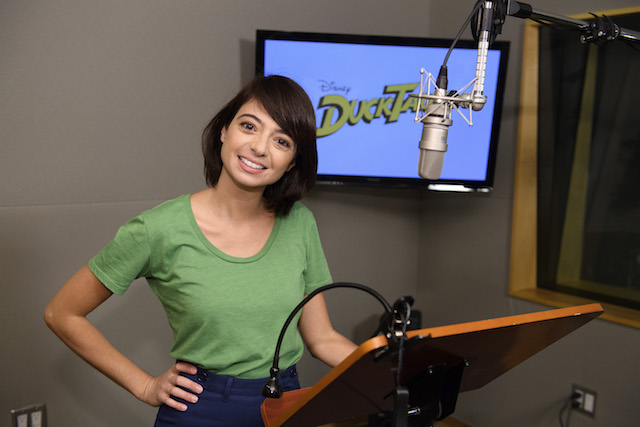 KATE MICUCCI: I couldn’t believe my luck when I was cast as Webby. You know when you get super, super, super excited and you dance inside your house by yourself?  That’s exactly what I did when I found out the news. I was super-stoked to be involved.

BEN SCHWARTZ: I was really, really excited, too. I wanted this role badly!

How did you react when you found out the news, Danny?

DANNY PUDI: I screamed when I discovered I was going to be voicing Huey in DuckTales. I literally screamed! I’m still super excited. DuckTales is something that I watched when I was a kid. Now I have kids of my own and I can’t wait for them to see the show. It’s going to be amazing. 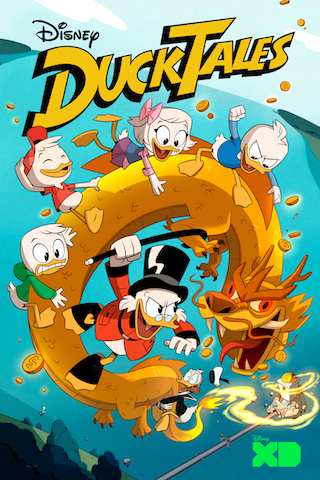 In the ‘80s version of DuckTales, there wasn’t much difference between the personalities of the triplets: Huey, Dewey and Louie. That’s changed in the new show, right?

BEN SCHWARTZ: That’s right. In the ‘80s animation, the triplets had different coloured outfits and that’s the only way you knew how to tell them apart.

DANNY PUDI: Back then, there wasn’t much distinction between the characters at all. They were all voiced by one person, too. But our versions of Huey, Dewey and Louie are very different.

BEN SCHWARTZ: Each of the triplets has a different personality in our show. There’s an older, middle and youngest triplet. They were born seconds apart, and that informs their character. 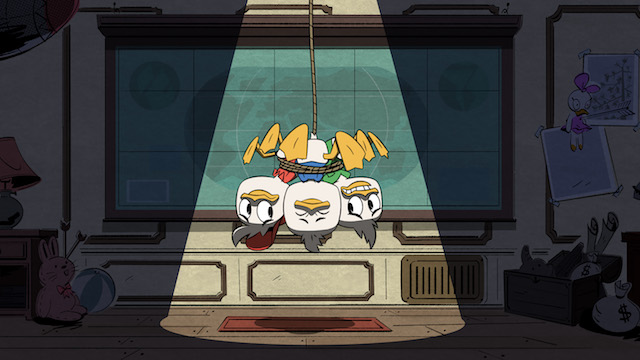 DUCKTALES – Disney XD has ordered a second season of the all-new animated comedy series “DuckTales” ahead of its highly anticipated summer premiere. The series stars David Tennant as Scrooge McDuck; Danny Pudi, Ben Schwartz and Bobby Moynihan as the voices of Huey, Dewey and Louie, respectively; Kate Micucci as Webby Vanderquack; Beck Bennett as Launchpad McQuack and Toks Olagundoye as Mrs. Beakley, and will follow the epic family of ducks on their high-flying adventures around the world. (Disney XD) HUEY, DEWEY, LOUIE

How would you describe the three triplets?

DANNY PUDI: Huey loves a plan and he’s trying to be a leader in this chaotic world, whether they are fighting snakes and lizards or something magical. The fun of playing Huey is the way that he tries to make sense of this crazy world they live in and the crazy adventures they go on. He’s a lot of fun to play.

BEN SCHWARTZ: My character, Dewey, is the middle child who wants to be seen. He’s the explorer. If there’s an adventure to be had, he is the first to jump in. And then there’s Louie, who is voiced by Bobby Moynihan. Louie is the youngest triplet. He is much more laid back than the other two. 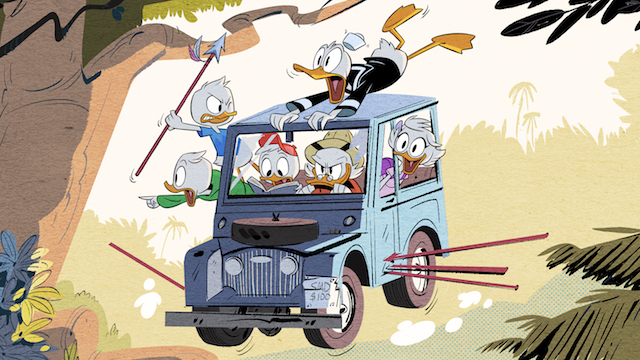 How would you describe your DuckTales character, Kate?

KATE MICUCCI: Webby is one of the guys. She’s very excited and she’s always full of energy. She often wants to lead the way and she’s full of ideas. Perhaps they aren’t always the best ideas, but she believes in herself and she always goes for it.

BEN SCHWARTZ: Webby is such a fun character. She’s an adventurer. It’s cool to see her with a grappling hook! 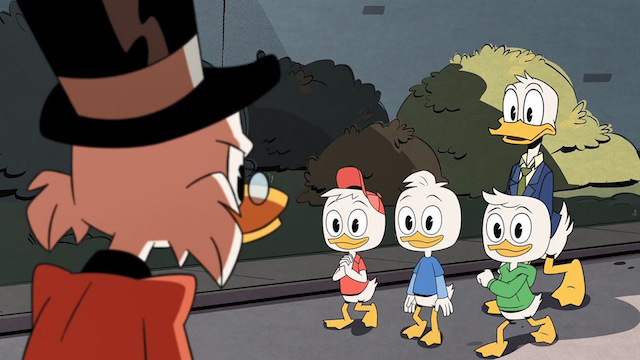 How much fun do you have voicing these crazy characters?

BEN SCHWARTZ: It’s so much fun!

KATE MICUCCI: I agree. I love heading into the recording booth for the show. I find myself moving around a lot in there when I play Webby. I feel like that helps me to be her energetic, playful self. 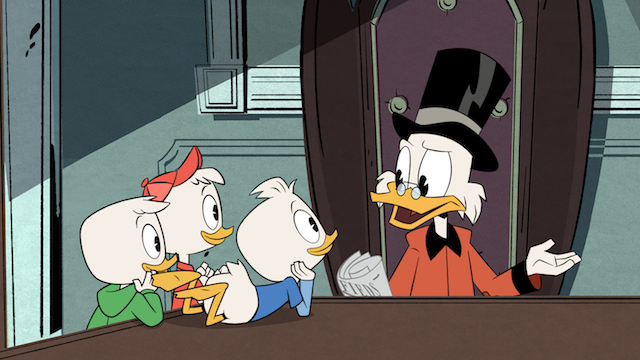 DUCKTALES – “Woo-oo!” – Donald Duck reluctantly takes his nephews Huey, Dewey and Louie to the home of their reclusive great-uncle Scrooge McDuck. Enthralled by their once legendary great-uncle and the wonder of McDuck Manor, the triplets and their newfound fierce friend Webby learn of long-kept family secrets and unleash totems from Scrooge’s epic past, sending the family on an adventure of a lifetime to the Lost City of Atlantis. “DuckTales” premieres in a one-hour television movie to be presented for 24 consecutive hours, SATURDAY, AUGUST 12 (beginning at midnight EDT/PDT), on Disney XD. (Disney XD) LOUIE, HUEY, DEWEY, SCROOGE MCDUCK

Are you allowed to improvise in the recording booth?

BEN SCHWARTZ: We don’t go in there and invent new storylines, but we can add little lines to the dialogue every now and then. It’s super fun to pepper words in there – but the script is always great anyway. The scripts are truly funny. A lot of voice actors will not read the script before they go into the recording booth. I always do because I’m a nerd, although I also look forward to reading it every week because I know it’s going to make me laugh.

How long does it take you to record an episode of the show?

BEN SCHWARTZ: It could be a Gizmoduck episode!

Do you record the lines for more than one episode in a recording session?

BEN SCHWARTZ: A lot of the time we will record two episodes in a session.

KATE MICUCCI: Webby is super excited all the time, so it’s really hard to do more than two episodes in a row.

BEN SCHWARTZ: You’ll lose your voice if you do too much!

Do you record your voices solo in the recording booth?

BEN SCHWARTZ: In the beginning, I did a couple of sessions with Danny – but that soon stopped. Often, we don’t often have the time to come in together – but it doesn’t matter. If I have lines with Webby, they will play me the dialogue that Kate has already recorded, so I can hear exactly what she’s said. It’s great.

DANNY PUDI: I think Ben and I distracted each other too much in the recording booth. We had more fun goofing around than working.

What are your earliest memories of the original DuckTales series from the ‘80s?

BEN SCHWARTZ: I grew up in New York and I can remember coming home from school every day to watch DuckTales. It was a big part of my childhood. I was also obsessed with the DuckTales video game for a very long time. In fact, for two years of my life, my phone’s ringtone was the theme song from the video game. It’s still on my phone to this very day!

KATE MICUCCI: I grew up watching Disney Channel and Disney movies. I always loved the show, but I was also really obsessed with the DuckTales video game. I kept begging my parents to get it for me. I feel really, really lucky to be Webby Vanderquack.

DANNY PUDI: I feel very, very lucky to be Huey, too. And I was a big fan of the original show. I can vividly remember sitting down to watch it with my brother and sister.

DuckTales is full of hair-raising adventures. If you went on an adventure with your character from the show, do you think it would be a success?

DANNY PUDI: I think it would be a huge success! I was a cub scout when I was little, so I’m prepared for many adventures – just like Huey.

BEN SCHWARTZ: For me, I think it would be a disaster. Dewey and me wouldn’t work well together. He’d be full of energy and I wouldn’t want to go anywhere. Dewey would be very frustrated that I’m bringing him down.

KATE MICUCCI: Webby and I would have a great success, but Webby would definitely lead the way. In real life, I’m not as assertive as Webby – but I’d happily follow along and try to keep up with her. I’d do my best!

DuckTales will premiere on Disney XD and DisneyLife on 1st March at 4.30pm

This entry was posted on Sunday, February 18th, 2018 at 11:06 am and is filed under Movies. You can follow any responses to this entry through the RSS 2.0 feed. Both comments and pings are currently closed.