It’s not often I get to meet a Oscar nominee, so there was no way I was going to turn down the chance to talk to two of them!  Producer Roy Conli and director Ron Hall had travelled over from the States to fly the flag for Big Hero 6 and talk huggable robots, Japanese bells and even baby penguins – among other things.

London Mums:       Big Hero 6 is a lesser known Marvel story, so I wondered what attracted you to it.

Roy Conli:    Don Hall, the director, really had a passion for Marvel and went to John (Lasseter, Chief Executive at Disney Animation) and said we were totally interested in putting something together in an animated form and John said, “go and find something that you want to do.”  So Don literally went through the Wikipedia page for Marvel, which is huge – they’ve got over 5,000 characters – and found Big Hero 6.  He was fascinated with the story, had never read it and when he read it he thought it was really fun, had a really neat spirit to it.  And when he went back to John and had a concept for it, John was totally supportive and Marvel was supportive.  Essentially, Marvel gave us the property and said not to worry about putting it in a Marvel universe.  So this is really a Disney animated film.

London Mums:       So you had a lot of freedom with it.  Perhaps more than you would have expected?

Roy Conli:    Complete freedom.  With any adaptation – I’ve adapted Hunchback of Notre Dame, I’ve adapted Treasure Planet and I’ve worked on an adaptation of the Rapunzel story – the more freedom you have, the easier it is to create the story.  The one thing we knew was that we wanted a story about a boy who loses his brother and is healed by his brother’s invention.  That was always the core of the story.  By having been handed the material, being able to place it in our own universe and having the freedom to alter the characters, it really gave us complete freedom to examine that.

London Mums:       So is the Baymax that we see in the film the same as the original Baymax?

Roy Conli:    He’s significantly different, as are all the characters.  One of the things we wanted to do was to make sure with all the characters that their super power was their intelligence.  That was something that was very important to us, and was slightly different to the original piece.  So the freedom to go in that direction played a huge part in terms of the uplifting story that you see.

London Mums:       How did you come up with Baymax’s walk?  It’s rather like baby steps and it looks so incongruous on such an XXL robot!

Roy Conli:    That is down to the brilliance of our animators.  Once we decided on the design and once we knew the shape, we knew we wanted a huggable robot and we also knew we needed a cute walk for him.  We went through a series of tests and the three finalists were a baby/toddler, the second finalist was a baby/toddler with a full diaper – very cute, but not for the parents!  But the winner was a baby penguin! 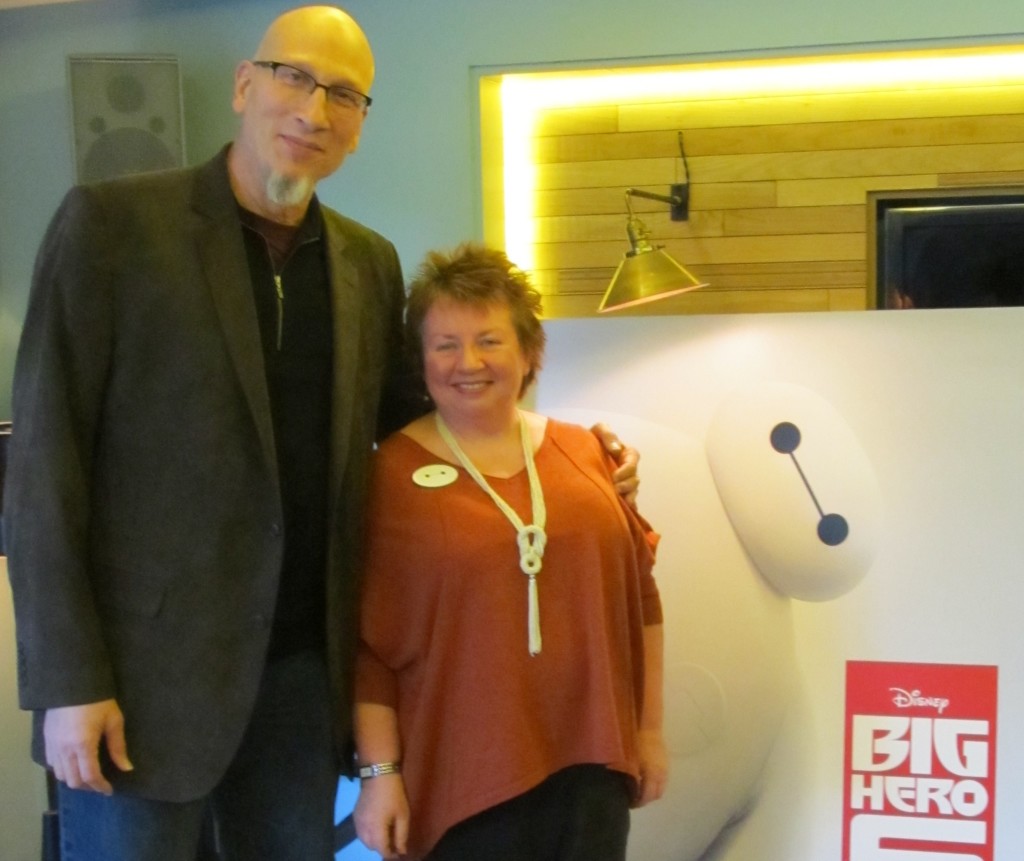 And Roy Conli is really tall!

London Mums:       The big character in Big Hero 6 is Baymax and he doesn’t look like a robot at all.  He’s a lot more cuddly.

Don Hall:       That was the goal.  I knew that was going to be one of our challenges early.  We’re so inundated with robots, they’re everywhere in movies so how were we going to do something unique and different?  Not only that, but his function in the story is that of a healer, so he has to become something of a surrogate big brother.  So what was that going to look like?  One of our animators coined the phrase ‘huggable robot’ so one of the first things I did was a research trip to MIT Harvard and Carnegie Mellon University.  I met with all of the top roboticists and I was just learning as much as I could because I knew that was going to be our biggest challenge – what is the robot going to look like and be like?

At Carnegie Mellon that I met a researcher called Chris Atkinson who was doing research into soft robotics.  I’d never seen anything like it.  It was a relatively crude arm made of vinyl filled with air and the practical application for soft robotics in the future will be in the healthcare industry – in rest homes, nursing care facilities and hospitals – and essentially they can’t hurt us because they’re not made of anything hard.  It was totally unique but, not only that, it was literally a huggable robot.  So the character of Baymax came in a lightning bolt when I saw that technology.  The idea that he’s a health care companion and nurse was formed out of that research trip.

London Mums:       Baymax has a male voice and I wondered if at any stage you’d considered him having a female voice because of the nature of his work.  Also there’s been a trend for having big name voices and you haven’t done that with this film.  Was that a deliberate choice?

Don Hall:       We were under no pressure to cast for celebrities.  It’s not about that.  Our aim as directors is to find the best actor for the role. For this one, Baymax was very difficult to cast.  I always pictured it as having a male voice but one that had a very soothing quality to it.  But that can be creepy as well, if you think of Hal in 2001:A Space Odyssey.  I looked at a lot of actors and finally, I think, the casting people started to get frustrated with me!  And then they found Scott Adsit and it was love at first listen, I guess!

The interesting thing about Scott is that he’s an amazing improv guy.  But the character of Baymax is tightly scripted. It’s a testament to Scott’s ability that he found nuances in  a very restricted character – he put pauses between certain words to make it sound like there was a processor trying to think.  He could get a laugh just by the way he did that, but he could also get pathos, he could also get drama.  There was a soul to that character in Scott’s hands.

London Mums:       Baymax is essentially an inanimate object and with a blank face and yet he’s incredibly expressive.  He reminded me of Gromit, except he has very expressive eyebrows, and poor Baymax doesn’t even have that!

Don Hall:       A lot of that was by design.  I loved the idea of limiting his expressions and challenging our animators.

When I did that research trip, there’s a term in robotics called ‘the uncanny valley’ where the more realistically human a robot becomes, the creepier it is.  And the robots I always gravitated towards were much simpler in design and I wanted Baymax to reflect that.  His face is based on some bells I saw at a Japanese temple.  I was looking up and saw these bells staring down at me and they had a peaceful, calm feeling and I was reminded of Baymax.  So I took a picture of them, brought it back to our animator and he loved it. 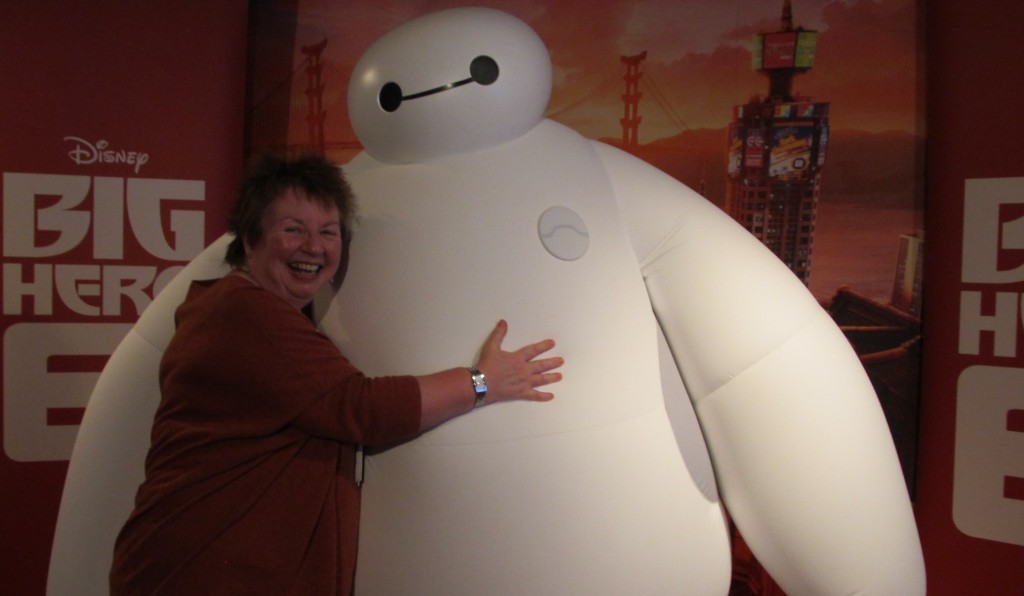 And, yes, I got a hug with Baymax as well!

The London Mums team had a blast at the special press junket of Big Hero 6 and you can see what Editor Monica Costa has been up too in this video which also includes her own interviews with both Roy Conli and Don Hall. You can tell from all this coverage and footage that we really love this movie! Enjoy!

Tags:  Baymax Big Hero 6 disney Don Hall Gromit Roy Conli
This entry was posted on Monday, January 26th, 2015 at 7:20 pm and is filed under Movies. You can follow any responses to this entry through the RSS 2.0 feed. Both comments and pings are currently closed.