The morals we took from The Boxtrolls film was ‘don’t be afraid of who you are and not to judge anyone unfairly’. My two boys, aged 5 and 8 liked the film a lot and discovered 3D for the first time thinking it was the greatest invention. The Boxtrolls characters were very ugly but had hearts of gold. The way ‘Fish’ looked after ‘Eggs’ as a baby and showed him how to make use of everything that was thrown away and to protect themselves from evil in the town. 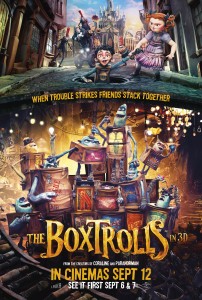 The misinterpretation that Snatch had stirred with the towns people created fear and judgement of the Boxtrolls but the truth came out in the end. This was expressed in the development of the lovely friendship between ‘Eggs’ and ‘Winifred’. Even though they had very different backgrounds and parents, their friendship was strong. If Winifred didn’t have a good moral sense then the whole film would have been pointless, she turned it round by recognising the true values of family and friends and it shows that even a small child can have a huge effect.

There are some scary bits that my boys jumped at like the time Snatch exploded after having an allergic reaction to cheese. Watching my boys expressions was so entertaining for me as they were mesmerised! They loved Shoe and Fish for their clever and funny ways, the animation being doll like and quirky and most of all the happy ending.

The Boxtrolls is a family event movie from the makers of Coraline and ParaNorman, both of which were Academy Award nominees for Best Animated Feature Film. It is the third feature production for the Oregon-based animation studio LAIKA. Shot on-site in 3D, and further advancing the groundbreaking work by hand and in technology at LAIKA, The Boxtrolls is a stop-motion, hand-drawn, and CG hybrid movie based on Alan Snow’s bestselling fantasy adventure book Here Be Monsters.

The new movie introduces audiences to a new breed of family – The Boxtrolls, a community of quirky, mischievous, fantastical creatures who have lovingly raised a human boy, Eggs (voiced by Isaac Hempstead Wright of Game of Thrones), since infancy in the amazing cavernous home they’ve built beneath the cobblestoned streets of Cheesebridge. They live a happy and harmonious existence away from society; the posh Victorian-era town’s residents are obsessed with wealth, class, and fine – but stinky – cheeses. Lord Portley-Rind (Jared Harris of Mad Men), the de facto mayor, rules the roost with his snobbish elite crony men in White Hats. Like everyone else, he believes the scary stories about the Boxtrolls that have been spread far and wide for over a decade by the villainous Archibald Snatcher (Academy Award winner Ben Kingsley). Determined to be accepted into the White Hats, Snatcher has imprisoned genius inventor and Boxtrolls friend Herbert Trubshaw (Simon Pegg of Star Trek) and is leading a gang known as the Red Hats to capture all the Boxtrolls. The Red Hats include the relentless Mr. Gristle (Tracy Morgan of 30 Rock), the awkward Mr. Pickles (Richard Ayoade of The IT Crowd), and the stolid Mr. Trout (Nick Frost of The World’s End).

While keeping their community together underground, the humans’ trash becomes the Boxtrolls’ treasure. The Boxtrolls wear recycled cardboard boxes the way turtles wear their shells. The kindhearted band of tinkerers also dumpster-dive and collect mechanical junk which they transform into magical inventions. But with his Boxtrolls family increasingly at risk because of Cheesebridge citizens misunderstanding them and because of Snatcher’s dangerous scheme, Eggs must venture above ground, “into the light,” where he meets and teams up with another 11-year-old, the fabulously feisty Winnie (Elle Fanning of Maleficent) – Lord Portley-Rind’s daughter. Together, Eggs and Winnie devise a daring plan to save the Boxtrolls from Snatcher, embarking on an adventure with madcap antics and open hearts which proves that heroes come in all shapes and sizes – even rectangles.

How Stop-Motion Got Started

An art form that began at the dawn of the motion picture, the stop-motion animation process was, is, and always will be uniquely enthralling – one of the most magical aspects of a medium capable of flights of fancy.

Single frame by single frame (and there are 24 frames per second in a motion picture), animators subtly and painstakingly manipulate tangible objects (characters, props, sets, etc.) on a working stage. Each frame is photographed for the motion picture camera – twice, if the camera is a 3D one as on the movies that animation studio LAIKA makes. When the thousands of photographed frames are edited and projected together sequentially, the characters and environment come alive. Movie magic is created by hand.

The Boxtrolls producer and lead animator Travis Knight notes, “Stop-motion animation is a very elementary process. You merely move an object and take a picture – simple. But, like most things that are simple, it’s just about the hardest thing in the world to do well.”

A stop-motion feature is comparable to a live-action feature in that there are physical sets that must be built and dressed; and performers who need to be properly coiffed, clothed, and lit – and given proper direction.

Cited as the very first example of cinematic stop-motion is the 1898 short The Humpty Dumpty Circus, in which British émigrés Albert E. Smith and James Stuart Blackton used the pioneering technique to bring a toy circus of animals and acrobats to life.

European animators were the first to use puppets and other objects to relate a coherent narrative, but it was California’s Willis Harold O’Brien who made it more of an art form over decades of refinement. O’Brien’s career spanned short films, the 1925 feature The Lost World, and (with sculptor Marcel Delgado) the original King Kong (1933). The ball-and-socket metal armatures created for the latter set a template that is still used today. O’Brien was honored with an Oscar for his work on Mighty Joe Young (1949).

One of O’Brien’s apprentices on the latter film was Ray Harryhausen, who would build upon his mentor’s techniques and whose “Dynamation” would inspire generations of animators. Harryhausen masterfully combined live-action and stop-motion animation to get humans and creatures interacting in such fantastical films as The Beast from 20,000 Fathoms (1953), 20 Million Miles to Earth (1957), The 7th Voyage of Sinbad (1958), and Jason and the Argonauts (1963).

Hungarian animator George Pal (György Pál Marczincsák) had arrived in Hollywood in the early 1940s, where he produced a series of “Puppetoons” short films for Paramount Pictures. Unlike O’Brien and Harryhausen’s techniques, Pal’s team used replacement animation, which required up to 9,000 individually hand-carved wooden puppets or parts, each slightly different, to be filmed frame-by-frame to convey the illusion of movement.

Several of Pal’s short films were nominated for Academy Awards, and Pal himself received an honorary Oscar in 1944. The director/producer continued to use puppet animation in such feature-length productions as The Great Rupert (1950), tom thumb (1958), and The Wonderful World of the Brothers Grimm (1962).

Millions of adults and children are well-acquainted with the work of Arthur Rankin, Jr. and Jules Bass. Using a stop-motion puppet process they dubbed “Animagic,” Rankin/Bass gifted television viewers with such classic holiday specials as Rudolph the Red-Nosed Reindeer (1964) and Santa Claus is Comin’ to Town (1970). Bass directed the team’s feature films, The Daydreamer (1966) and Mad Monster Party? (1967), which utilized the same process.

A few years later, the U.K.’s Aardman Animations was founded by Peter Lord and David Sproxton. Joined by Nick Park, the company would go on to set new standards with its Oscar-winning stop-motion/“claymation” animated short films, such as Creature Comforts and the Wallace & Gromit-toplined A Close Shave and The Wrong Trousers, before expanding into features to continuing success, most recently with the Oscar-nominated The Pirates!

In 1982, Disney conceptual artist Tim Burton made the short film Vincent with Disney animator Rick Heinrichs. Shot in expressionist black-and-white and narrated by Vincent Price, the picture was done in stop-motion.

A decade later, Burton hand-picked a team of artists and animators to create what would become the groundbreaking stop-motion musical The Nightmare Before Christmas, from his original story, tapping his onetime California Institute of the Arts (a.k.a. CalArts) classmate and Disney colleague Henry Selick to direct the feature-length film.

The 21st century saw the founding of LAIKA, formed to present the artistry of award-winning filmmakers, designers, and animators in the field of animated entertainment. LAIKA is 550 people strong and has been acclaimed for its skill in storytelling and character performance in a variety of media, including 2D, CG, and stop-motion. Dedicated to creating bold, distinctive, entertaining and enduring works of art, the company is located just outside of Portland, Oregon.

While LAIKA earlier had a hand in the Oscar-nominated stop-motion feature Corpse Bride (2005), directed by Tim Burton and Mike Johnson, which was made in the U.K., it was in its own Oregon studios that LAIKA broke new ground with Coraline (2009). Directed by Henry Selick, the stop-motion feature was the first one to be conceived and photographed in stereoscopic 3D, and as such was unlike anything moviegoers had ever experienced before. Sparking a stop-motion resurgence in moviemaking, Coraline earned Academy Award, Golden Globe Award, Critics’ Choice Movie Award, and BAFTA Award nominations for Best Animated Feature Film; was named one of the year’s 10 Best Films by the American Film Institute (AFI); and won three Annie Awards, the animation community’s Oscars equivalent.

While the traditional stop-motion process remains the bedrock of LAIKA, the company has continued to integrate new technology, specifically RP (Rapid Prototyping) and CG (Computer-Generated) advances, into its moviemaking. The Boxtrolls (2014), the company’s third feature, was again conceived and photographed in stereoscopic 3D. Notably, it is also an example of hybridization: a stop-motion, hand-drawn, and CG hybrid which marries and celebrates the handmade tradition and the latest tools of the trade. Once more in Oregon, new ground is being broken in exploring and expanding a classic art form.

At LAIKA itself, Knight notes, “There is no shortage of interesting characters with wonderful stories; everywhere you look, there is inspiration.”

This entry was posted on Tuesday, September 9th, 2014 at 11:15 am and is filed under Movies. You can follow any responses to this entry through the RSS 2.0 feed. Both comments and pings are currently closed.