Pic Nic is one of the defining landmark films of 1950s Hollywood starring William Holden and Kim Novak. I am revisiting some of the classic movies to coincide with Eureka Entertainment’s release presented for the first time ever on Blu-ray in the UK as part of the Eureka Classics range in 2019. Here I am looking at why Picnic can be seen as an iconic film not because it is symbolic of the post war generation but also because it revolutionise movie making in its own right. 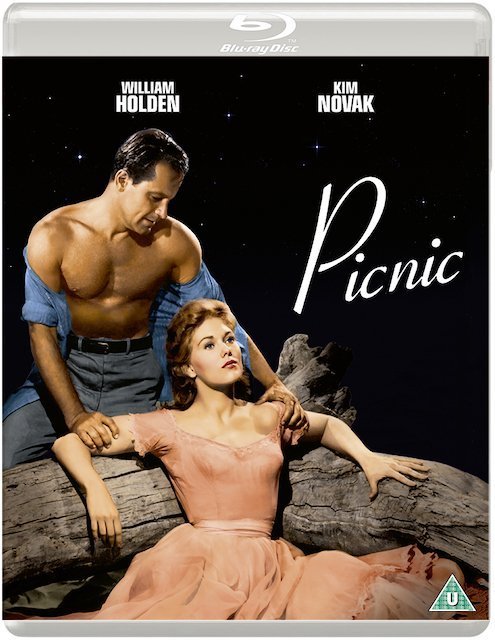 Picnic is a portrait of the desires and frustrations simmering under the surface on an ordinary Labor Day in a small Kansas town. Starring William Holden in one of his most iconic roles, and Kim Novak in the performance that made her a star, the film is one of the most fondly remembered American classics of that decade, adapted by director Joshua Logan from his own Broadway production (which won a Pulitzer for playwright William Inge).

Drifter Hal (Holden) returns to his hometown, unemployed and with his college football glory days long behind him. Reunited with his old friend Alan (Cliff Robertson), Hal soon becomes acquainted with the Owens sisters, beautiful Madge (Novak) and budding poetess Millie (Susan Strasberg), along with the Owens family’s boarder, schoolteacher Rosemary (Rosalind Russell). While Millie longs for Hal, his affections turn to Madge, and at the holiday picnic, passions ignite, jealousies erupt, accusations and rage explode, and Hal and Madge must decide if they can escape their small, stifling hometown.

While its examination of middle American mores may seem quaint today, Picnic‘s torrid romances, erotically charged dancing, and Holden’s torn shirt were considered bold and risqué in the conservative 50s, although now it can be viewed as an honest and moving study of a long-gone era. Featuring stunning Cinemascope photography by the legendary James Wong Howe, this much-beloved Oscar-winner is a grand, unforgettable 1950s American milestone, and is presented here on Blu-ray for the first time ever in the UK.

I love revisiting classic films regularly and this week I watched Picnic in a new Blu-Ray version by Eureka Classics. Picnic is a classic romantic melodrama from 1956 small-town America that destroys all stereotypes and cliches from its time and for that reason, for me, it remains a masterpiece in cinematography.

The dancing scene between handsome William Holden and glamorous Kim Novak, sex symbols of the time, was dubbed too erotically charged then but is really sensual if you look at it with contemporary eyes. The ripped shirt and William Holden’s bare chest – with no pumped muscles – make it for a very refreshing sensuality.
Men on the big screen were natural and full of imperfections, but spectators were more forgiving. I am totally forgiving and personally love those 50s-60s men full of imperfections! Where have they all gone?!?!

William Holden (Sunset Boulevard, Sabrina, The Bridge on the River Kwai, The Wild Bunch, and Network) was one of the biggest box-office draws of the 1950s and 1960s. He won the Academy Award for Best Actor for the film Stalag 17 (1953).

Golden Globe Winning Actress Kim Novak is best known today for her performance as Madeline Elster/Judy Barton in Alfred Hitchcock’s thriller Vertigo. In 1995, Novak was ranked 92nd by Empire Magazine on a list of the 100 sexiest stars in film history.

Picnic was nominated for six 1955 Academy Awards, including Best Picture, and won two. It is based on playwright William Inge’s Pulitzer Prize winning play.

I am really glad it has been presented on Blu-ray for the first time ever in the UK as new audiences can hopefully enjoy this unforgettable 1950s American milestone and appreciate its importance in film-making history.

Available to order from:

Blu-Ray review: Witness for the prosecution by Billy Wilder

This entry was posted on Thursday, June 6th, 2019 at 11:05 am and is filed under Movies. You can follow any responses to this entry through the RSS 2.0 feed. Both comments and pings are currently closed.