Cleanin’ up the town: Remembering Ghostbusters is the ultimate behind-the-scenes documentary that showcases the making of the original 1984 Ghostbusters and pays a lovely tribute to the whole creative team and cast behind today’s global phenomenon. It’s out in the UK on Blu-Ray now, and in US on Crackle TV. It’s a MUST-HAVE Blu-Ray for fans and cinema goers as well as for curious children and teenagers who want to find out how special effects were made in the ‘80s. Cleanin’ up the town: Remembering Ghostbusters is THE documentary that will bring families together to remember a franchise that has changed the world of filmmaking. 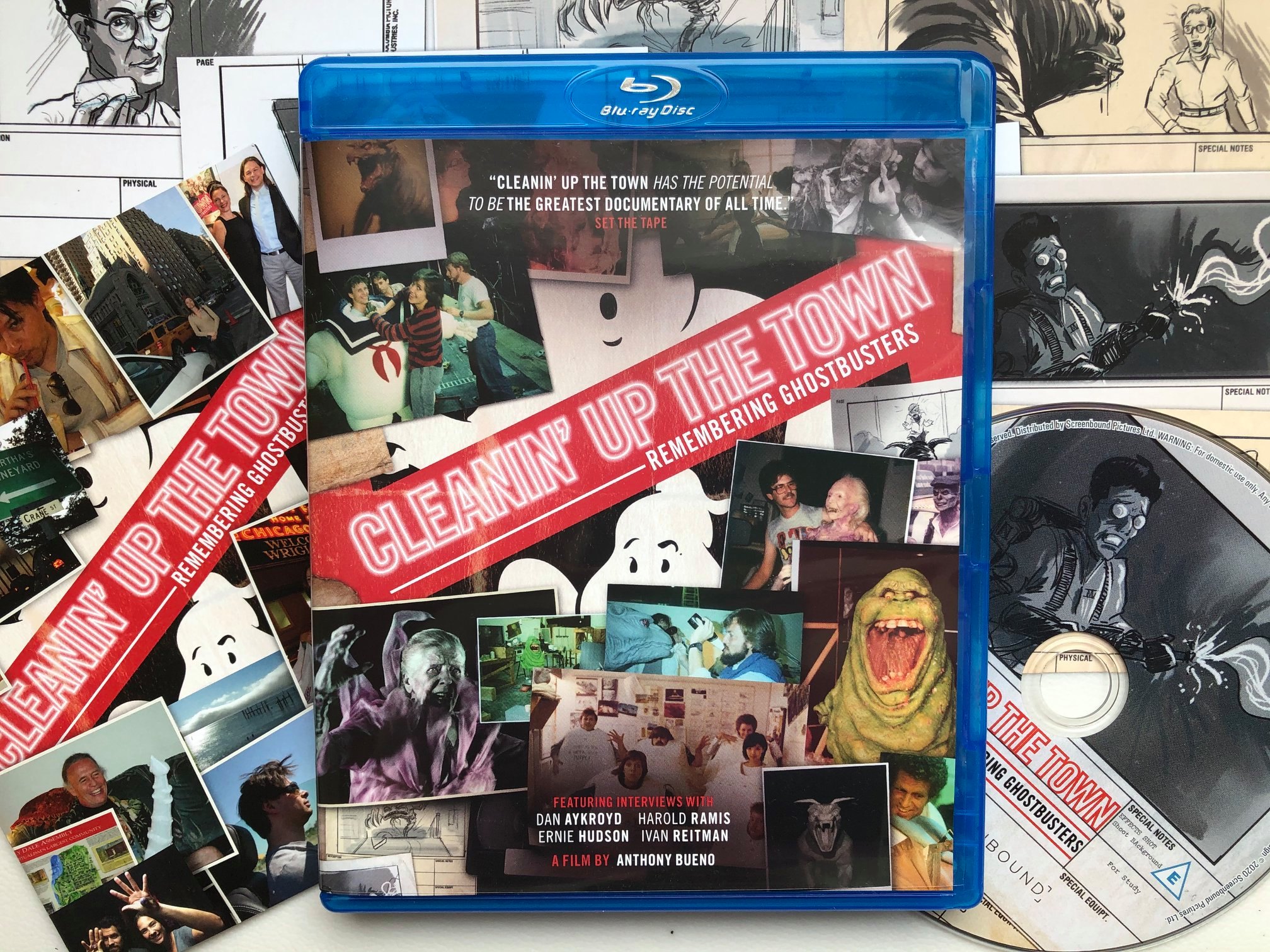 With the original film having made a lasting impact since childhood, director Anthony Bueno has assembled a comprehensive documentary for both fans and film lovers alike. It features interviews with director Ivan Reitman, and lead cast Dan Aykroyd, Harold Ramis and Ernie Hudson.  Additionally, it hallmarks the extraordinary achievements made by cast and crew working in visual effects era before the game-changing Jurassic Park. 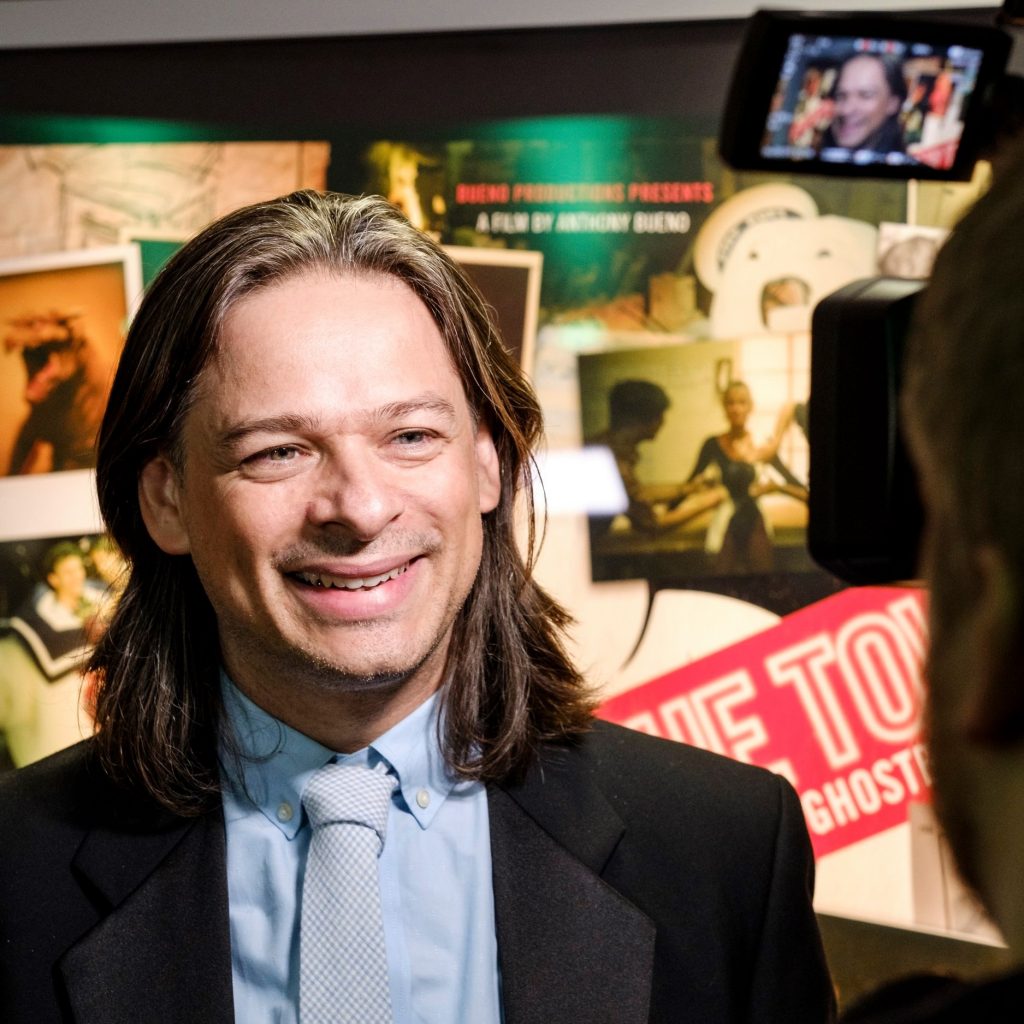 The film contains never before seen archive material much from the personal collections of members of the creative team themselves, it’s a lasting testament to the craft of filmmaking teamwork and inventive puppeteering when faced with adverse time constraints and all manner of technical challenges.

The whole Ghostbusters’ franchise is funny, scary at times, and has excellent lead actors. I’m looking forward to the release of Ghostbusters: Afterlife – the 4th movie – on 5 March 2021 starring Paul Rudd among the brilliant cast including Bill Murray and Dan Aykroyd who will reprise their roles from the original films.
Cleanin’ up the town: Remembering Ghostbusters has been 12 years in the making. To retain creative control the Buenos self-financed the documentary. That was certainly a great decision. However, eight years into the project Anthony and Claire Bueno launched a Kickstarter campaign to help boost funding. The crowd funder succeeded, and unexpectedly allowed for the Ghostbusters community to have greater inclusivity to the beloved franchise. After its European premiere hosted at the BFI IMAX London last December, the film was released in selected cinemas nationwide as well as in Canada. 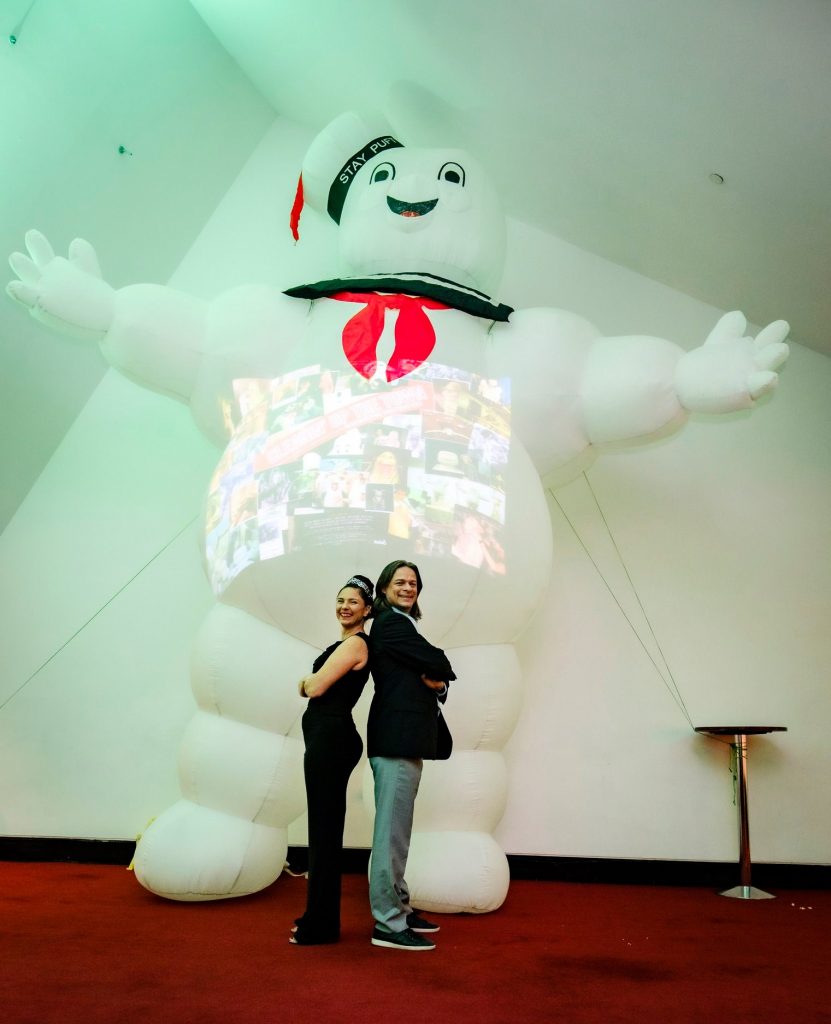 This documentary is clearly a labour of love. It’s so well made that it’s almost a better watch than some of the movies in the franchise. I was never a huge fan as I did not watch them in cinema when they came out. My parents thought these movies were  too scary for me as a pre-teen so I never really watched them properly. I only got to watch them at friends’ houses when they were shown on TV away from my parents’ eyes. ’80s TV sets, however, were not that great. A few years ago, though, I watched them back-to-back with my pre-teenage boy who absolutely loved them. That made me re-evaluate the whole franchise so much so that I have even become a fan. 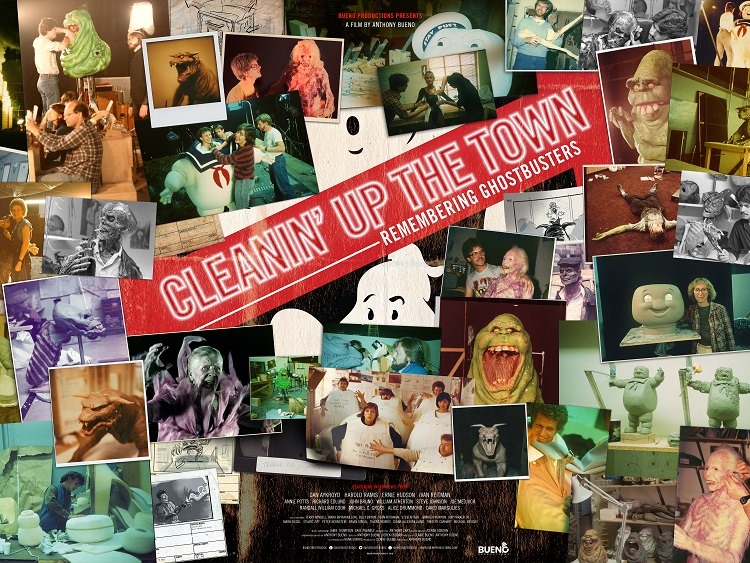 My favourite interviews include Harold Ramis – who was such a warm person and sadly passed away too soon in recent years – Dan Aykroyd, who talked about his great grandfather background as a medium and who made him mix real work on ghosts and comedy to make a ‘good old fashioned ghost comedy’ – and last but not least Alice Drummond – the librarian starring in possibly my favourite scene from the first movie! So iconic!
I love the well-researched stories behind the posters, the score, the background of the screen writing, remembering some of the most iconic scenes with the actors, puppeteers, producers, writers and technicians. 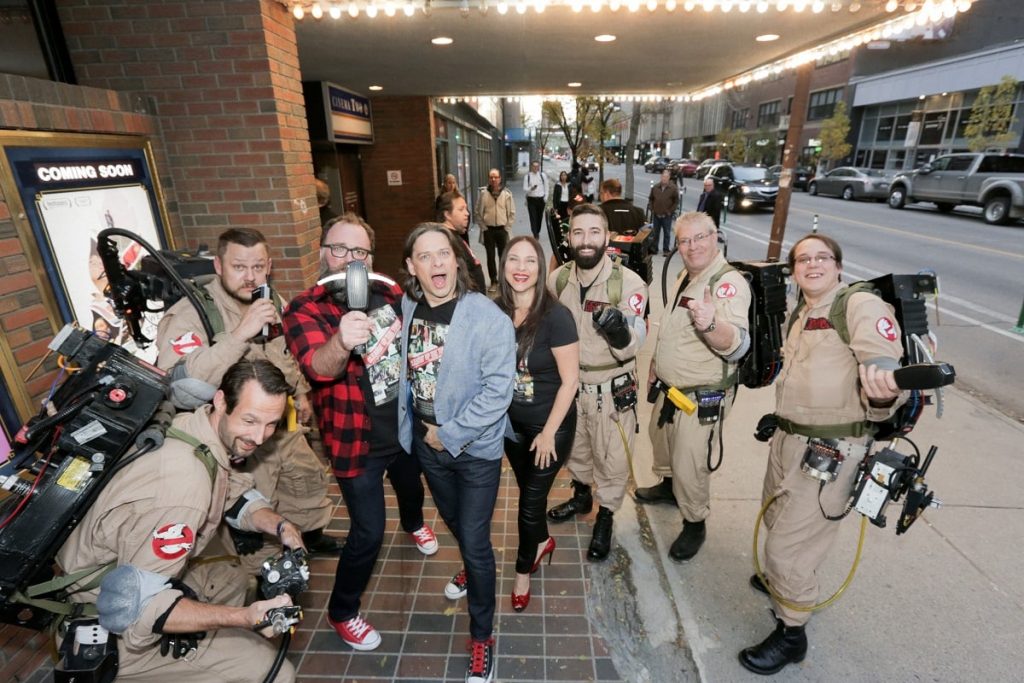 What children will especially enjoy are the behind-the-scenes of the special effects. Actors, writers, technicians and producers all explain those in great detail. Geeky teenagers will find curious how special effects in movies were done in the ’80s which were much more mechanical than these days.
I like the way this documentary has been edited by theme. This approach really helps you focus and remember the facts. As a film critic, it is vital for me to retain a lot of interesting anecdotes for future reference and this documentary will remain memorable in my mind.  It makes you appreciate all the work that goes into making a movie heavily reliant on mechanical special effects and real props. 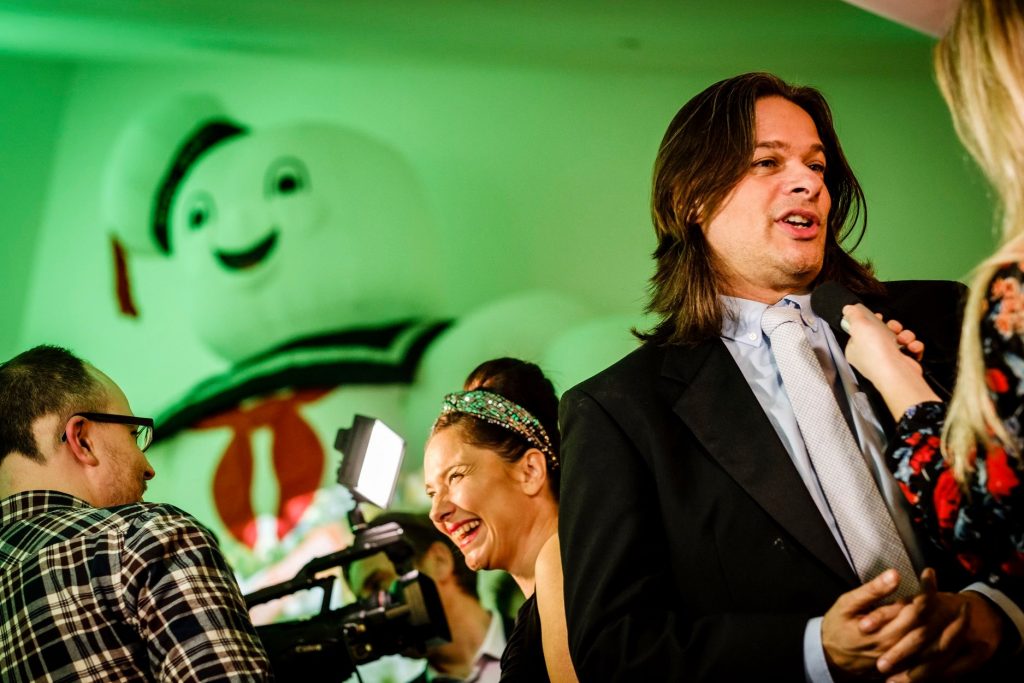 Cleanin’ Up The Town: Remembering Ghostbusters shows passion for filmmaking and behind-the-scenes which is entertainment in its purest form. This documentary will always be remembered as fundamental footage in the history of movie makers. Capturing all these details and anecdotes about how a successful ghost comedy series was made, is a precious testament to the world of filmmaking to be treasured like the movies themselves. Any child watching this now would want to go and binge-watch the movies over and over again for years to come. Simply Superb!

Over 50 minutes of Blu-ray extras include:

Cleanin’ up the town: Remembering Ghostbusters blu-ray is released in UK by Screenbound (RRP £14.99)

Available on Amazon, Zavvi and is now airing in US on Crackle TV.

This entry was posted on Wednesday, June 24th, 2020 at 3:03 pm and is filed under Movies. You can follow any responses to this entry through the RSS 2.0 feed. Both comments and pings are currently closed.