Lovely behind-the-scenes chat with Jeff Fowler, the Oscar-nominated director on unleashing Jim Carrey, the “swagger” of his blue hero, and the “instant gratification” of watching the final Sonic the Hedgehog movie with audiences. “Every teenager can see a bit of themselves in Sonic,” says Jeff Fowler. “So, this was about taking someone people have loved for 30 years and telling a film story with him.” 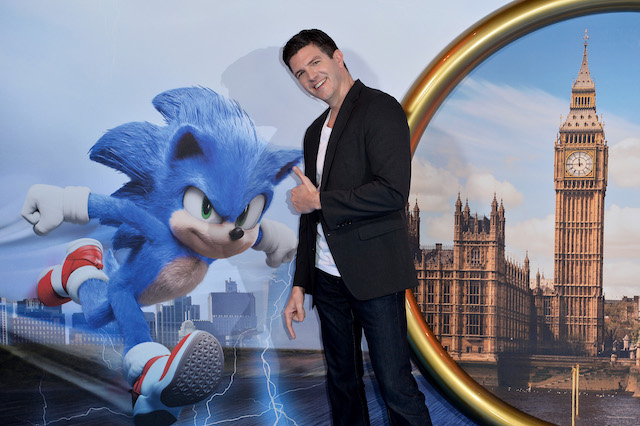 How do you feel now that the movie is done?

“Pure excitement. I am so happy with the movie and so excited to nearly be sharing it with audiences. I’m counting down the days! I’ve been working on this for three years and wouldn’t change that for anything. The whole experience has been such a positive one – all the cast and crew have been amazing. And now, to see the fans’ reaction to it [in early screenings], is incredible.”

What was it like watching the movie with an audience for the first time?

“Amazing. When you’re making a movie with humour in it, to watch people watch the movie and laugh and have the reaction to a moment that you wanted them to have, it’s an incredible feeling. It’s instant gratification, that people are having fun and laughing and gasping with emotion and enjoying themselves. It changes your whole experience of a movie, when you get to watch it with an audience.” 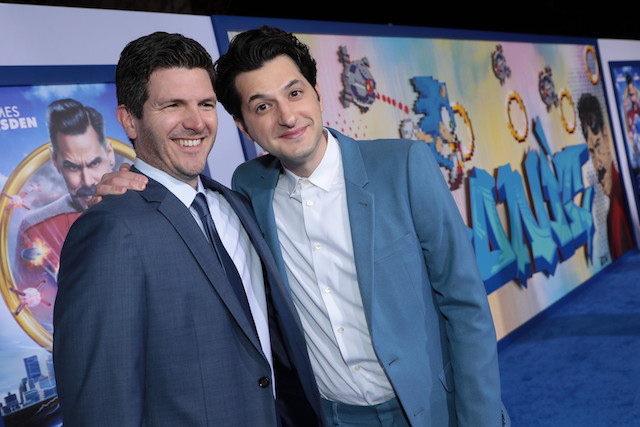 What’s your relationship with Sonic been like over the course of your life?

“I was 13 when the first game came out and I loved it. And I really feel like we’ve managed to create something for everyone with this movie [not just fans of the game]. There’s humour and there’s action and there’s Jim Carrey and things that are very emotionally universal. When I was 13, I was playing every video game I could get my hands on.Then the Sega Genesis came along with better graphics and gameplay, and Sonic was the mascot and the flagship character for Sega because that game was so popular and such an industry-changing moment. And not just from a video game perspective, but from a character perspective. You just hadn’t seen a character like Sonic before, a character with genuine swagger. He had a style, an attitude you just hadn’t seen in games before, and teenagers responded to that immediately, in the best way possible. And they still respond to it. I think that’s why he has been around for 30 years, because every teenager can see a bit of themselves in Sonic.”

Your Twitter feed has the tag: ‘Masher of Creative Potatoes. Tamer of Hedgehogs.’ Have you really tamed Sonic? Is Sonic even tameable?

“That’s an excellent question, and the answer is no. Sonic is not tameable! That’s an excellent point – I’ll have to change that to ‘Attempted Tamer of Hedgehogs’. Sonic really is energy and spirit incarnate, and  just the joy of being a kid and constantly being in motion. He uses all of the elements of his imagination and play, for fun. There’s so much about Sonic that is just elemental and essential about being a kid: enthusiasm and optimism and sheer spirit. It’s electric.” 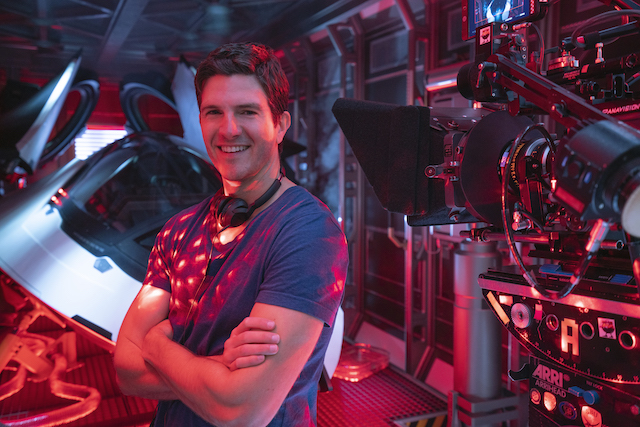 Director Jeff Fowler on the set of SONIC THE HEDGEHOG from Paramount Pictures and Sega. Photo Credit: Doane Gregory.

How did you build the character of ‘movie Sonic’, as opposed to ‘game Sonic’?

“Well, step one was basically casting the right actor. In this case, that was Ben Schwartz. And that decision goes to almost the earliest days of the whole project. We produced a proof of concept, a three-minute test piece that was in the same exact style of what’s now the finished film – a live-action hybrid. We had a very early version of Sonic, and Ben voiced him. And there is so much about Ben that is the perfect fit for Sonic. He brings the humour and the comedy, of course, because he is a tremendously talented actor and comedian. But then we worked on finding these little moments of texture, little character moments, of vulnerability or emotion, to give him a little more depth. That was the trick, working with Ben to craft the performance. The process was never about, ‘Okay, how do we bring in all these elements from the game…?’ It was about creating a character, about taking someone people have loved for 30 years and telling a film story with him. Doing something that’s emotional and has heart and loads of action but is also true to the game. Giving Sonic some more dimension.”

How much did the script evolve when Ben came on board?

“It didn’t from a storytelling point of view, but I would definitely say that when he was doing lines, he was incredible at riffing on them. He’d stay in his lane in so much as not going off course when it came to story, but anywhere that he could add more humour or punch-up the dialogue or come up with a gag, he was doing that all the time –contributing to the character and being an absolutely key part of the process. I always wanted all the cast to feel that they had the freedom to try things. You get much better creative out of that process. And Ben always gives a full-body performance [not just a voice performance]. He can’t help himself! He’s gesturing and doing mannerisms that the animators can steal and say, ‘I’m using that little gesture he just did, because it’s real.’”

Talking of real, when the first Sonic The Hedgehog trailer came out, the Internet exploded with a huge debate about Sonic’s look in the movie. As a result, you and your team went back into the movie and did considerable work on it, to the point that now the fans are delighted. That’s a huge decision. What was that whole process like?

“It was definitely a watershed moment of happiness to see the fans react so positively to our redesign work [when they saw the new version of Sonic]. It was actually a very simple and easy decision. The message [from the fans] was so clear and unifying about how they wanted to see him that, in a way, it really brought our team closer together. We loved the movie so much that we didn’t want people to stay away from it because they weren’t happy with the design. We knew that if we could do that revision, we’d be in a really great place. So, everyone just rolled up their sleeves and we jumped in. It was a huge relief to release that second trailer and see how people responded.”

What can you tell us about Sonic’s story here?

“The goal was always to have, by the end of the movie, the Sonic that you know and love from the 1991videogame. The Sonic that is completely in control of his powers and has all that confidence. There are certainly aspects of the character that we wanted throughout the movie – the humour and the attitude. That’s just who Sonic is. But in terms of his arc, where we meet him in the film, him living this existence as an outsider on Earth, he is extremely relatable. He is pure wish-fulfilment for a kid. But, from a character point of view, there had to be something missing, something that Sonic needed to develop as a character across the film. And that’s this idea of friendship, of him going from this very lonely existence, in this cave where he’s got all these human treasures, to a life with a real human connection. It’s about him finding a family.”

So, you’d say that this is an origin story?

“Absolutely. The biggest difference between the game and the movie is that with the game you are really experiencing Sonic as the hero, as the guy that’s just completely in control of his powers. But in the film, he’s learning and growing into that role.”

What do you want people to take from this movie?

“I think that [in the world] optimism is often in short supply, and I think that movies have always provided escapism.We always wanted this film to be a celebration of optimism and positivity, and just fun. We want you to walk out with a huge smile on your face, and your children racing past you. When kids leave the theatre with this movie, they really are little balls of energy. It activates some dormant gene in them, which gives me the greatest satisfaction imaginable.”

You were nominated for an Oscar for your first movie, the short movie Gopher Broke. That’s not a bad start, right?

“[Laughs] It was crazy. I was working at Blur Studios – Tim had recruited me right after I had graduated – and every year Tim would put out a call for entries for a short film. Anyone could submit an idea; it was very democratic. The supervisors would vote on the ideas submitted and whichever idea got the most votes, that would be the short that the studio would make. So, I submitted Gopher Broke and it happened to win. And the last thing that I would have expected would have been for Tim to let me direct it. I mean, I had been at his company for less than two years. I was 24 years old. He was basically like, ‘Well, it’s yours till you screw it up!’ And I was very fortunate to get nominated for an Academy award. It was very surreal.

In Sonic the Hedgehog, Jim Carrey delivers one of his most brilliantly deranged performances. How do you direct that? Or, do you just let him go and see what happens?

“Jim is so great about collaborating. Before the cameras are even rolling he’s pitching ideas. Out of that comes a really great plan – and then you just unleash him! He really is just a force of nature. So incredibly talented, so funny,and his instincts are so good. Just watching him is amazing.”

This entry was posted on Monday, June 8th, 2020 at 11:10 am and is filed under Movies. You can follow any responses to this entry through the RSS 2.0 feed. Both comments and pings are currently closed.