Netflix has just announced a new Kids’ Original animated series – BEAT BUGS. It looks super cute and is inspired by the music of The Beatles so is great for kids ans parents alike. I don’t about you yummy mummies out there, but I have already instilled a passion for the Beatles in my son. The Beatles should be introduced in music classes the same way classical music is. I really look forward to seeing this series but I will have to wait until later this year. 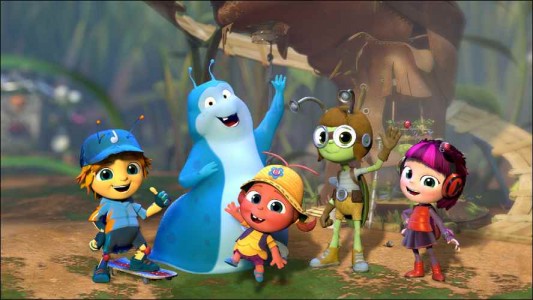 The Beat Bugs are charming, funny, adventurous, and have a knack for getting themselves into mischief and mayhem. Each of the five friends (Jay, Kumi, Crick, Buzz, and Walter) has a distinctive personality, and they display the charm and energy of five knockabout, lovable kids. They are best friends who band together to explore and learn in an overgrown suburban backyard, which to them is their entire universe.

This fun animation series is inspired by the music of the Beatles – sung by international music artists. Most interestingly Sia sings “Blackbird” and P!nk sings “Lucy In The Sky With Diamonds.” Other renditions of iconic songs will feature from James Bay, The Shins, Of Monsters and Men, Eddie Vedder, Chris Cornell, Regina Spektor and Birdy. James Corden also joins musical cast.

This entry was posted on Thursday, February 18th, 2016 at 11:05 am and is filed under Movies. You can follow any responses to this entry through the RSS 2.0 feed. Both comments and pings are currently closed.