Mamma Mia! Here We Go Again is finally out on DVD and I am glad I can share my interview with Andy García Andy García who plays Fernando in the popular sequel. Andy García is a confident and charming man in his 60s who has embraced his age with grace. The mature roles he gets these days seem to resemble more and more his own real self. In the Spring he starred in the movie Book Club as an attractive and romantic Airplane Captain – Diane Keaton’s love interest. In Mamma Mia! Here We Go Again Andy García plays Cher’s long-lost lover with great elegance. 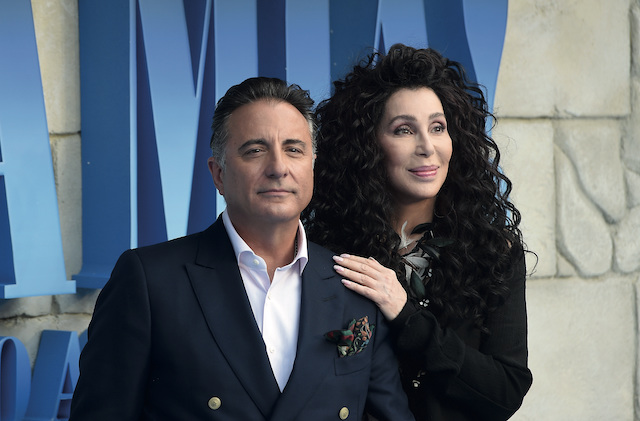 Andy Garcia posing with Cher at the “Mamma Mia! Here We Go Again” world premiere held at the Eventim Apollo, Hammersmith on 16 July 2018 in London

When I was asked to attend the press conference for the film Mamma Mia! Here We Go Again, I was all over the moon because I’ve had a crush on him since he played the gentle and sensitive husband to Meg Ryan in When a man loves a woman.

I was a tiny bit nervous but as soon as I crossed his gaze I fell tremendously at ease. His Venus eyes are still very sexy despite being 62. 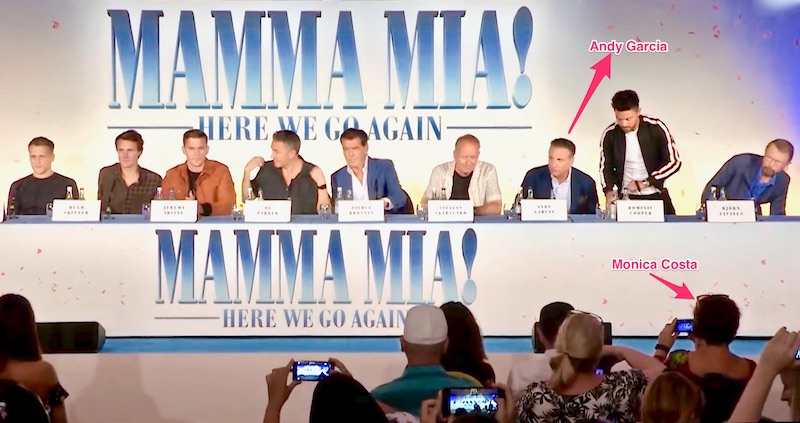 In this chat Andy García tells me more about his character, Fernando Cienfuegos, the hotel manager in Greece, who is always dressed in linen, wears a stylish hat and has a well-groomed silver beard. Before his reunion with Ruby (Cher), Fernando seems quite sad and is fully dedicated to his job ensuring his clients are happy. He hints that ‘the ship of happiness sailed away a long time ago’ for him. But when he reunites with Ruby, everything changes.

Q: Mamma Mia! Here we go again is huge film. How do you feel about it?

AG: It’s hard to describe my feelings. The energy that it creates is incredible. It’s a testament, obviously to the first film, and to ABBA’s music that people are so connected with, and the anticipation that they have for this movie is a beautiful thing. This film celebrates life, women, family and love. It is a joy, full of optimism and just what we need in the world. I felt like I could take on the world when I came out seeing it. 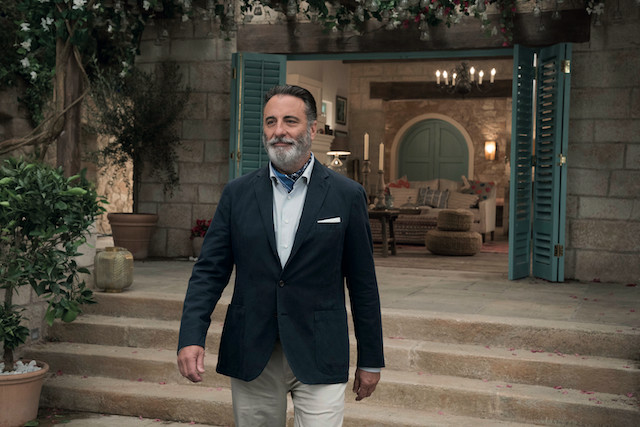 Q: Who is your character Fernando?

AG: I play the general manager of the hotel club, and within the story I have a past. If you know the song Fernando, there is a past. And in the lyrics, it talks about the past that I had with Cher, who is grandmother to Sophia, played by Amanda Seyfried, and Meryl’s mother and Lily’s mother. Now, there’s been some rumour that it’s possible that I’m also the grandfather. ABBA’s musician Bjorn said that it’s funny seeing me now as the Fernando of his song. He conjured up that guy 40 years ago looking at a starry sky and writing about Fernando, the freedom fighter, and right now I am this guy.

Q: Tell me a bit about your work with Cher on this film. What was it like having Cher serenade you?

AG: Last night or in the movie?

Q: Start wherever you wish to.

AG: It was a great privilege to work with Cher. She is crazy, warm-hearted and such a talent. We got on so well, very easy going right away. I was such a huge fan of Cher, not only as a singer but as an actress. So, when they approached me to be a part of it, I was very excited. I learned shortly thereafter, that Cher picked me out of a bunch, so that was doubly a blessing for me. I have so much respect for her.

Q: What’s your favourite scene in the movie?

AG: My favourite scene is when Cher just says, Fernando. 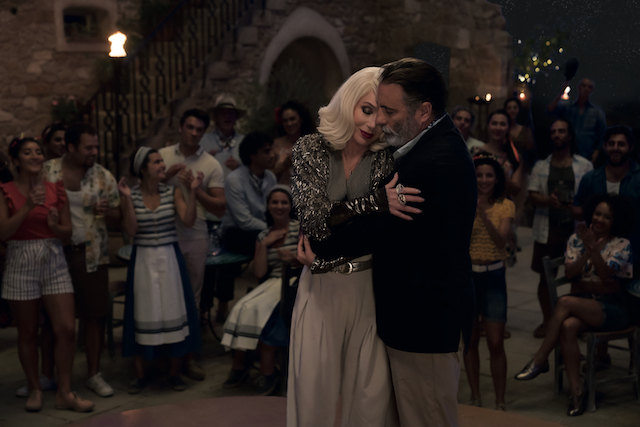 Q: Cher is a legend, and you’ve been singing and acting alongside her. What can you tell me that we don’t alredy know about Cher?

AG: Actually, she’s extremely down to earth. One of the things I have always been attracted to her, even from her early days of television with Sonny and their show, is that she always showed an extraordinary talent as an actress. Her sense of humour, the dryness in her sense of humour, to me is so engaging. She’s so present in life. She’s so aware of everything and her commentaries on things are very, very funny. I remember when we were doing the film, I was experiencing some issues with my back. I kind of strained it playing golf here in England. She gave me some remedies and things that I should try. Then she texted me and said, “Here try this, I think it would be good for you.” And she signed it Ruby with one of those kisses. She likes to apparently tweet and text a lot. So, I said, “Cher, is this you?” And she replied, “Of course it’s me, how many people do you know named Ruby?” So that kind of sums it up. 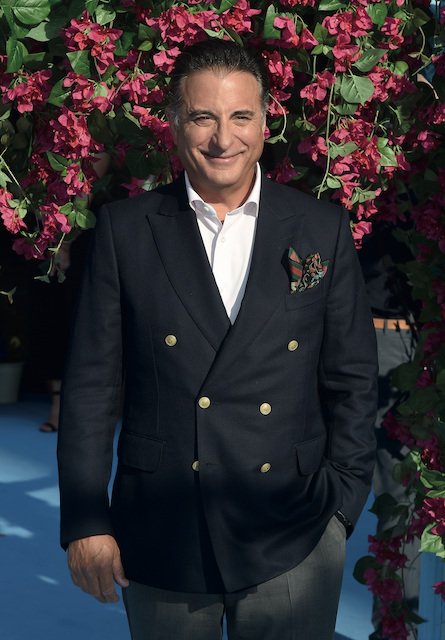 Q: Mamma Mia! Here we go again! is quite a departure from your previous roles. How was it like to be part of a musical, and how much singing did you have to learn in terms of your preparation. The whole experience, I mean, we know you for different roles.

AG: It’s like anything else, any part, you start from scratch and start building the character. One of my challenges was singing with Cher, well let’s say she sang. I chimed in a little. Even though music been a tremendous part of my life – it’s not the first time I sang – you still have to cater to the tonalities of that song and be supportive in that song, so that was a challenge.

But we also needed to fill the back story of the relationship between our characters. Fernando is such a powerful love song, longing, trying to remember those moments in life that meant so much to you. Not only the connection of the love side, but also the fact that they were involved in this sort of hypothetical revolution together. This is heavy stuff so I just tried to kind of lose myself in that as deeply as I could and hopefully the acting Gods would inspire me right in that moment, right before the take. In films, it’s not like theatre, where you’re gearing up for that one little moment. You get to explore the character in a very short period of time. And in a couple of takes and then it’s gone. So you try to time yourself to read through, to set everything up for it, somehow for that inspiration to have residence. But the song takes you there, the story in the song gives you the challenge. It’s what Robert Browning said: “One’s reach shall be greater than his grasp, or what’s a heaven for?”. And the story of Fernando and Ruby, in this case, it’s a very intense back story, and you just try to reach for it as best you can.

Andy was certainly one of the most enthusiastic members of the Mamma Mia cast. The director Ol Parker mentioned that at the end of the movie when everybody was on set to do “Super Trouper”, Andy came in and his job was to help Cher up the steps on to the stage. He said: “What do I do now?” And the director said, “I guess you just melt away.” But he asked, “Can I just stay and dance?” And he was like: “We’d love it if you did”. Behind Cher’s left shoulder is Andy getting down. Simply joyful! 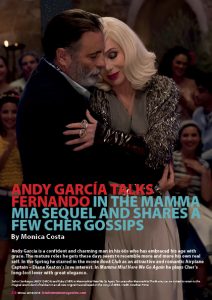 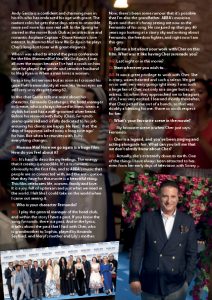 This entry was posted on Tuesday, November 27th, 2018 at 11:05 am and is filed under Movies. You can follow any responses to this entry through the RSS 2.0 feed. Both comments and pings are currently closed.