2015 looks like a great year for movies. Next Spring there are a couple of light-hearted productions including Fifty Shades of Grey and A Little Chaos that seem perfect for a girlie night out. 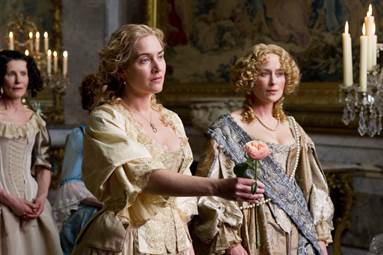 A LITTLE CHAOS re-imagines the creation of the Rockwork Grove, one small element of the Sun King, Louis XIV’s building of the magnificent Palace of Versailles.

Madame Sabine De Barra (Kate Winslet) is an unlikely candidate for landscape architect of the still?to-be-completed Palace of Versailles. She has little time for the classical, ordered designs of the man who hires her, the famous architect Le Nôtre (Matthias Schoenaerts). However, as she works on her creation, she finds herself drawn to the enigmatic Le Nôtre and forced to negotiate the perilous rivalries and intricate etiquette of the court of King Louis XIV (Alan Rickman). But Sabine is made of strong stuff; her honesty and compassion help her to overcome both the challenges of her newfound popularity, and an unspeakable tragedy from her past, to win the favour of the Sun King and the heart of Le Nôtre.

A LITTLE CHAOS is produced by Gail Egan and Andrea Calderwood of Potboiler Productions and Bertrand Faivre of The Bureau for BBC Films and Lionsgate, in association with LipSync. The screenplay is by Alison Deegan, Alan Rickman and Jeremy Brock.

This entry was posted on Thursday, December 25th, 2014 at 7:30 pm and is filed under Movies. You can follow any responses to this entry through the RSS 2.0 feed. Both comments and pings are currently closed.