I was one of the lucky guests who attended a 1953-themed dinner to mark the DVD release of the first series of The Crown on Queen Elizabeth’s early years as the Sovereign. The luxury meal was hosted this week at St Ermin’s Hotel in London. Here is why I will remember this special occasion for a long time. 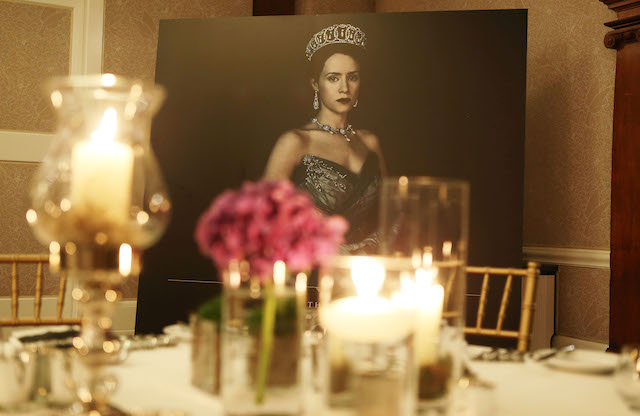 As well as experiencing chamber music before and during the 7 course meal, we were served a re-interpretation by Chef Alexander Boyd of the dinner that was offered to guests of the Royal Family in 1953. 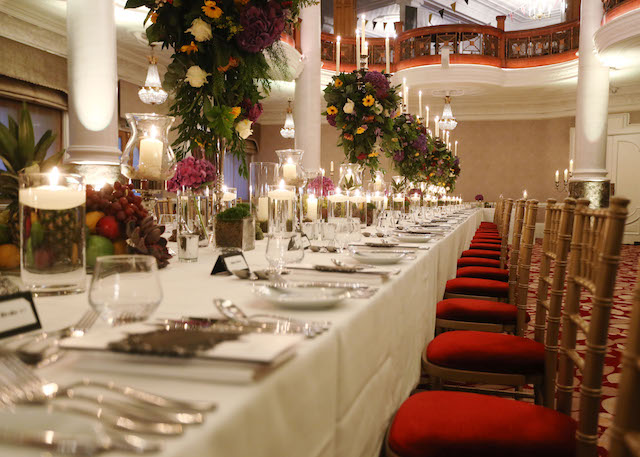 The table layout at the posh St Ermin’s Hotel was regally decorated for the occasion to make the VIP guests feel immersed in the 1953 coronation atmosphere. 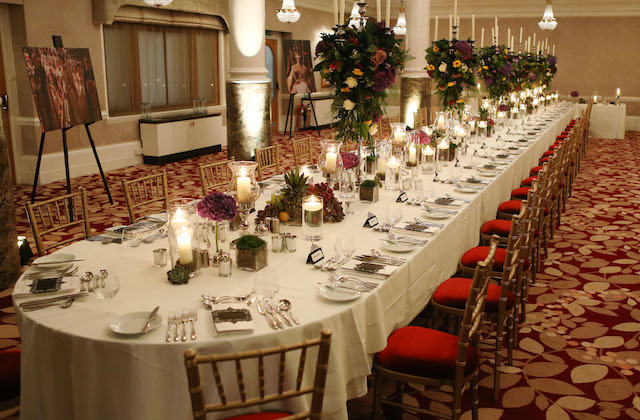 The video of our evening

Find me in this lovely video that was made during the evening:

The Queen came to the throne on 6th February 1952 and her Coronation took place on 2nd June 1953 but the coronation state banquet was held on 3rd June 1953. 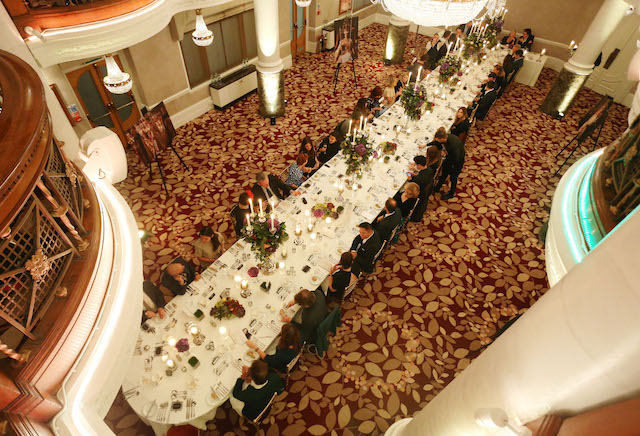 Now down with the menu which was the absolute star of this celebration. 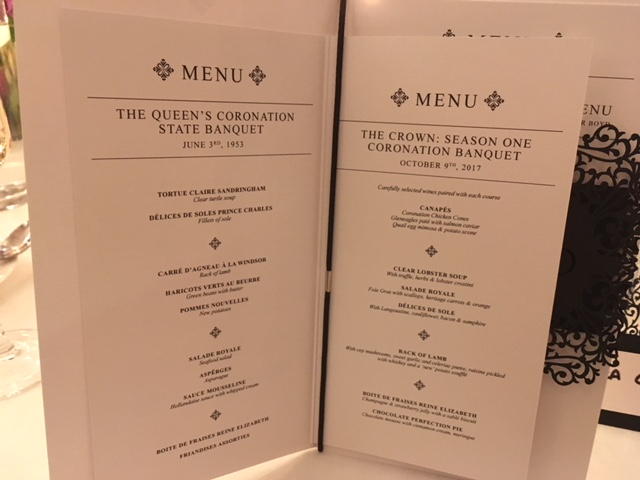 This is the original menu next to the one re-interpreted by the St Ermin’s Hotel executive chef Alexander Boyd – who came out half way through the seven courses to explain that the interpretation was mainly due to the seasonal issues. He could have not served asparagus as in the original menu because they are not seasonal in October and other similar amendments. 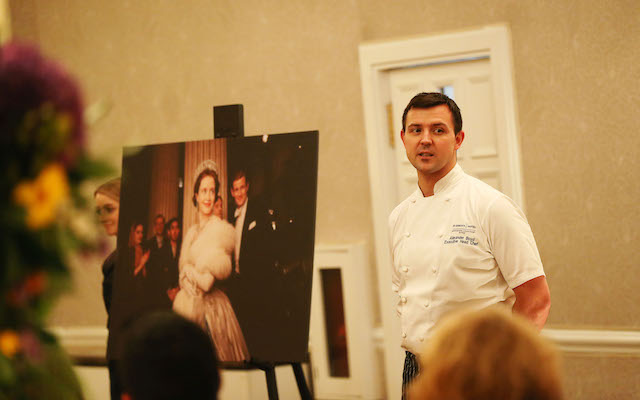 One of the three canapés served before the meal started was Coronation chicken served in little ice-cream cones. The dish was originally invented by Constance Spry to feed to Coronation guests in 1953. As the food had to be prepared in advance, she suggested a recipe of cold chicken in a curry cream sauce, with a seasoned dressed salad of rice, green peas and mixed herbs. 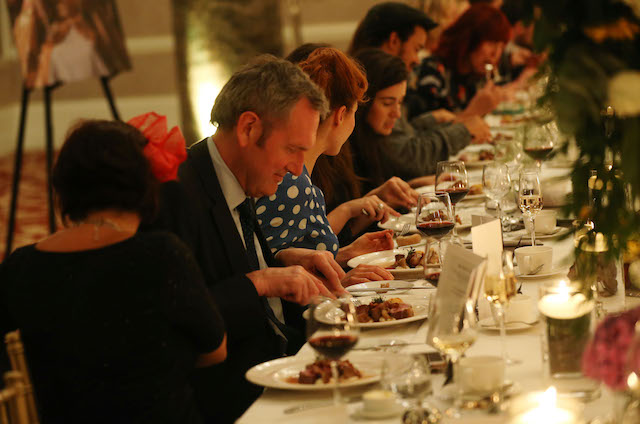 Find me here! The only one with a hat….

The taste of these coronation chicken cones was very mild, not spicy but their look was amazing in those trays. 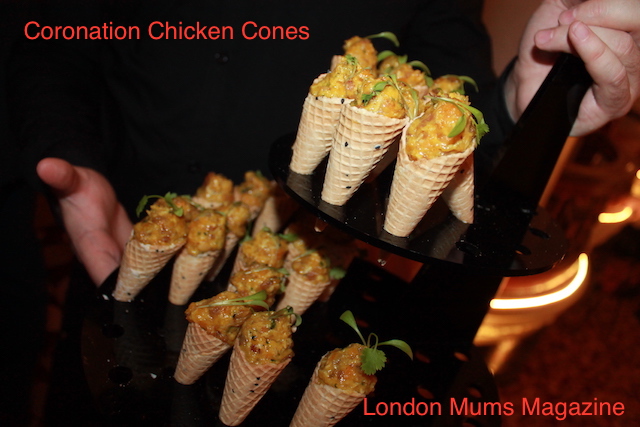 The first course consisted in clear lobster soup with truffle and herbs and a lobster crostini. Light and delicious although the truffle covered the lobster flavour a tiny bit. 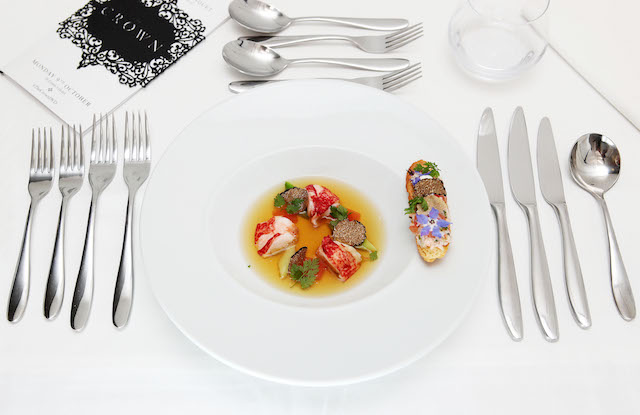 The second course was a Salade Royale including foie gras (yes seriously!) with scallops, heritage carrots and orange. The controversial foie gras is an acquired taste and I would have loved it served simply with nice fresh bread on its own rather than with scallops. But because I like both I quite enjoyed the combination although I struggled to finish it. 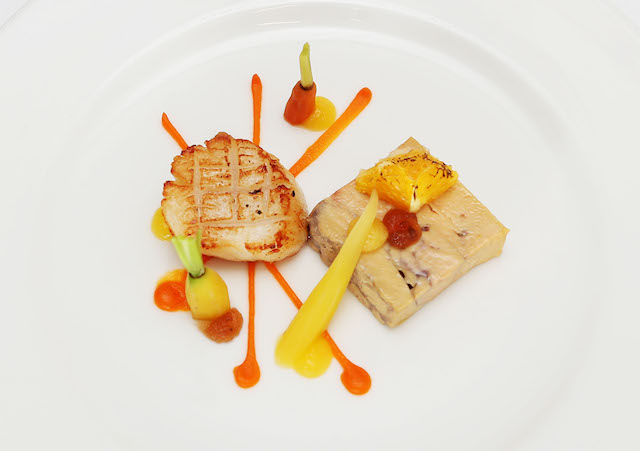 The third course was a Delice de sole with langoustine, cauliflower, bacon and Samphire – a sophisticated combination of fish and pork which pleasantly surprised me. 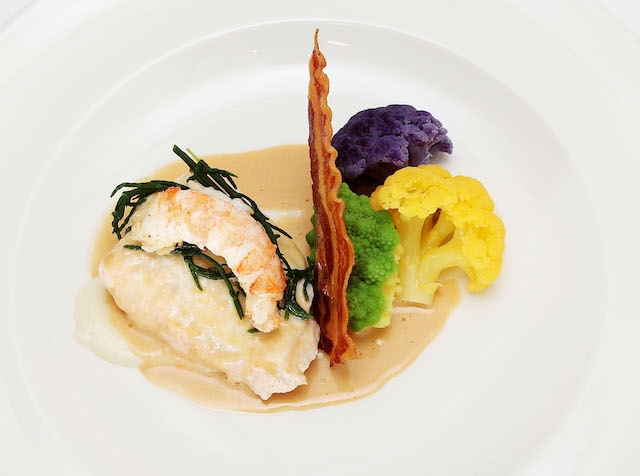 By the time the fourth course arrived, I wasn’t hungry any longer but then I could not miss what was probably the most delicious course: a rack of lamb with cep mushrooms, sweet garlic and celeriac puree, raisins pickled with whiskey and a ‘new’ potato souffle’. 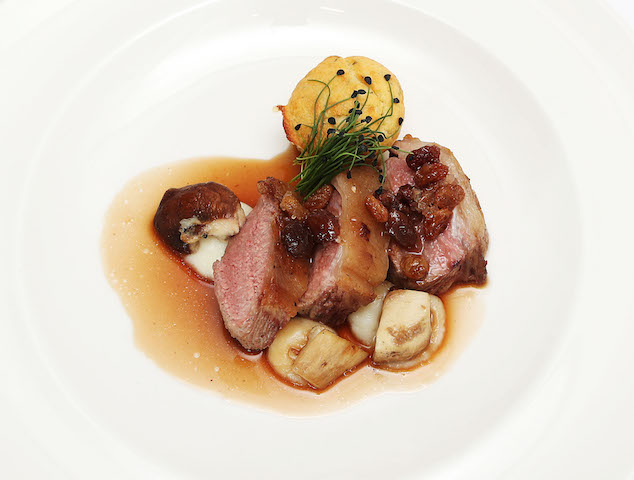 The pre-dessert was absolutely delicious and probably my favourite of all courses. Maybe at this stage of such a long and nutritious meal you are eager to eat something fresh like this Boite de Fraises Reine Elizabeth made of Champagne and strawberry jelly with sable biscuit. I believe this was like the original pre-dessert. 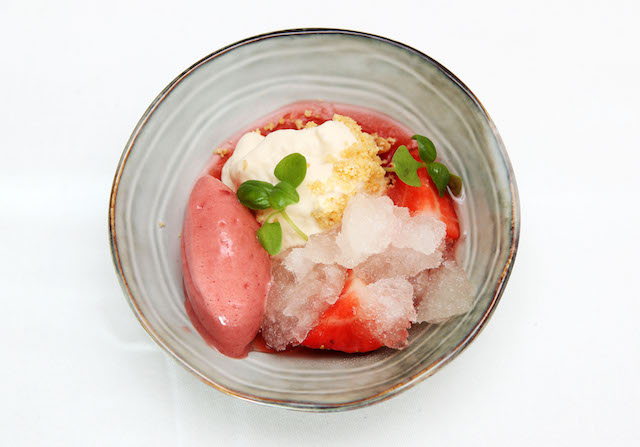 Last but not least the dessert was absolutely stunning and super rich in chocolate cream. Unsurprisingly the name gives it away: Chocolate perfection pie made of chocolate mousse with cinnamon cream and meringue. The crown shape was marvellous. I have never seen such a cute little cake. The perfect conclusion of a regal dinner. 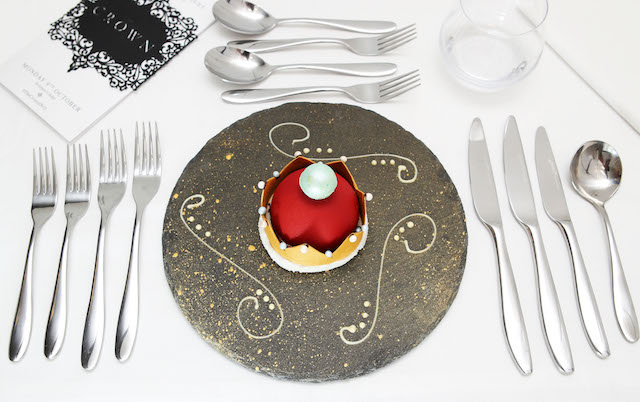 During the meal historian Robert Lacey spoke about his involvement in the making of The Crown and commented on how much effort has gone into the research. Personally the accuracy of the details in this serial is what made me watch it twice. What you miss on the first watch you catch it during a second viewing. It’s a wonderful historical series that even secondary School children should watch to understand what was going on behind the scenes of politics. I am glad it is now available on DVD – funny enough I had just cancelled my Netflix membership. 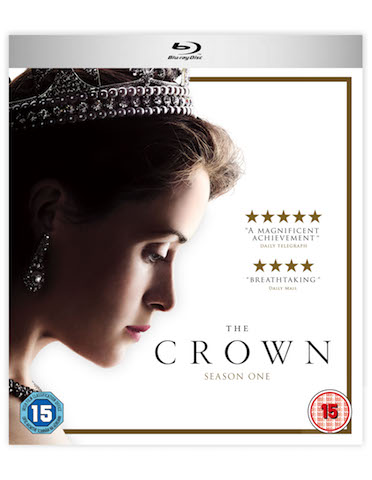 THE CROWN: SEASON ONE debuts on Blu-ray™ and DVD on 16th October 2017, courtesy of Sony Pictures Home Entertainment.

Apparently the Queen revealed to be a fan of The Crown. This tells me only one thing, i.e. that the series is seriously accurate and that she feels well portrayed in there. 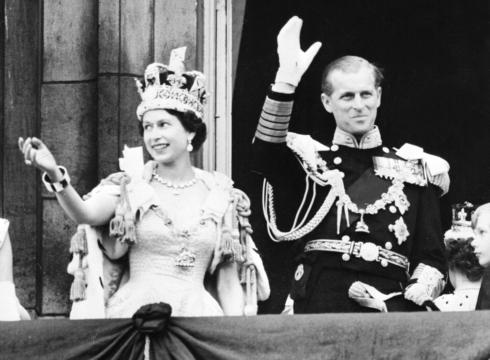 The Queen and Prince Philip on Coronation Day in 1953 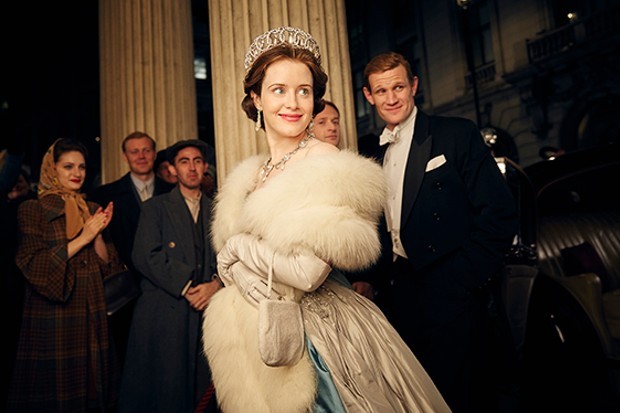 In the goodie bag we received after dinner there was a magnificent visual book by Robert Lacey The Crown: The Inside History which I will read over Christmas although I have already flipped through the pages to watch the stunning photographs included. 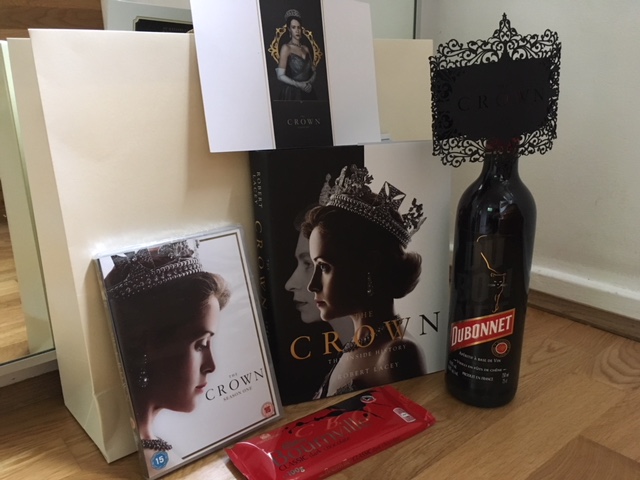 Facts about The Crown

If you haven’t seen The Crown yet, here are some interesting facts.

The series takes a sumptuous look at the early part of the Queen’s reign and the circumstances that lead to it. It covers the period from Queen Elizabeth II’s marriage to the Duke Of Edinburgh through to the disintegration of Princess Margaret’s engagement to Peter Townsend, charting how a princess truly becomes a Head of State.

The Crown focuses on Queen Elizabeth II as a 25-year-old newlywed faced with the daunting prospect of leading the world’s most famous monarchy while forging a relationship with legendary Prime Minister, Sir Winston Churchill. The British Empire is in decline, the political world is in disarray, and a young woman takes the throne….a new era is dawning. Peter Morgan’s masterfully researched scripts reveal the Queen’s private journey behind the public facade with daring frankness. Prepare to be welcomed into the coveted world of power and privilege and behind locked doors in Westminster and Buckingham Palace….the leaders of an empire await.

Blu-ray™ and DVD will include a full gallery of unit photography. The season will also be available on Blu-ray™ and DVD as a Platinum Edition Box Set. Presented in premium packaging, this includes a reproduction of an article from The Times from the day of the Queen’s Coronation, 2nd June 1953, along with a House of Windsor family tree art card, an exclusive collector’s coin and the first chapter of The Crown: The Inside History by Robert Lacey.

The Crown has a total run time of approximately 520 minutes. Believe me when I say that it flows nicely and you will be tempted to bing watch it.

This entry was posted on Friday, October 13th, 2017 at 1:57 pm and is filed under Movies. You can follow any responses to this entry through the RSS 2.0 feed. Both comments and pings are currently closed.