Winnie The Pooh revival with a new exclusive story! My son and I were star-struck when we met Jamie Theakston, Natalie Cassidy, Julia Bradbury and Tina Hobley at the event announcing the winner of Disney’s Winnie the Pooh Laureate competition, which was held at Disney’s flagship Oxford Street Store on Wednesday 26th March 2014.
The event saw the campaign ambassador, presenter and dad of two, Jamie Theakston, crown Anne Baker from Lewes, East Sussex, National Disney Winnie the Pooh Laureate. 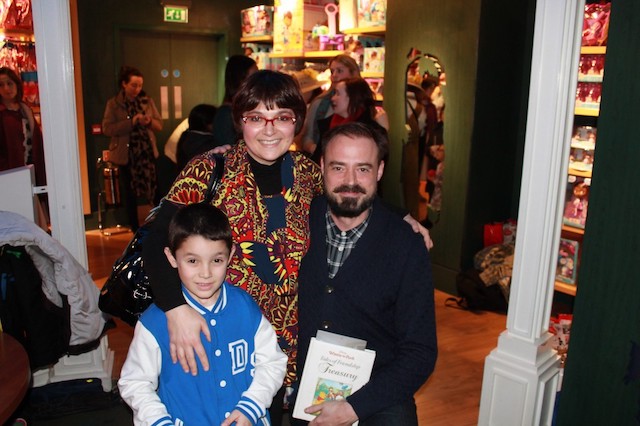 We interviewed Jamie about his dad’s challenges, his favourite stories of all time, his career and hobbies. Watch this space as we will print this interview in full in the Summer edition out mid June. Until then check out this video of Jamie reading a Winnie the Pooh story as well as a video of winning author Anne Baker reading her new story (published below).

Following research that revealed that 76% of parents tell their children stories inspired by their local area, Disney launched a nationwide storytelling contest to find regional Winnie the Pooh Laureates and one overall national winner, whose stories celebrated their area’s local history and landmarks in a unique way, just as A.A. Milne used Five Hundred Acre Wood in Ashdown Forest to create the fictional Hundred Acre Wood for the setting of the popular Winnie the Pooh books.

Aspiring Laureates were asked to share original stories inspired by their local area, featuring Winnie the Pooh and Friends taking an adventure outside of 100 Acre Wood, or introducing their own new cast of characters. National winner, Anne Baker, who also collected the Southern title, rose to the challenge and sought inspiration from her hometown of Lewes, where she took Winnie the Pooh and Friends on a unique journey to meet the Queen and share a pot of honey!

Jamie Theakston commented: “Having read all the entries, I was particularly inspired by Anne Baker’s creativity, impressive storytelling skills and the inspiration she found in her local area of Lewes to create her imaginative story. I loved the fact that Winnie the Pooh and Piglet got to meet the Queen without even realising! It’s a tale which truly celebrates Winnie the Pooh’s storytelling heritage and Anne should be very proud of her achievement.”

The presenter concluded: “I’ve loved being a part of the Winnie the Pooh Laureate campaign as storytelling is, and always has been, a huge passion of mine.”

The regional Disney Winnie the Pooh Laureates include Jude Lennon from the North West, Emma Taylor from Scotland and Sally Jenkins from the Midlands.

Gingerly, Piglet stepped out of bed and onto the cold floor of his bedroom. He crossed to the window, which was covered in frost, and scraped a small area so that he could peer out at the bright blue sky.

Hurriedly he got dressed, putting on a thick, warm jumper over the rest of his clothes and pulling on a pair of socks which had been hanging in front of the wood burner all night. After eating a bowl of acorns for his breakfast, Piglet put on his coat, hat and boots and set off to see his very best friend, Pooh.
Now Pooh was not a morning sort of a bear. If he’d had his way, he’d much rather have spent his day in bed, eating honey. But Piglet knocked so loud that he had to get up and open the door.

“Come on Pooh,” said Piglet, jumping up and down excitedly, “We’re off to Lewes today. The Queen is visiting!”

“I don’t think she will,” Piglet laughed, “But I’m sure we’ll manage to find some at the Friday Market at the Clock Tower.”

“Well, what are we waiting for? Let’s go!” Pooh said eagerly.

Hurrying to the bus stop, they were just in time to hop on the bright yellow bus!

“Nearly there, Pooh,” Piglet cried, “I can see Lewes Castle! Maybe that’s where the Queen is.”

When the bus pulled into Lewes bus station, there was almost no room for Pooh and Piglet to get off. The crowds were everywhere!

Piglet felt a little bit scared. He was only a very small Piglet and he wasn’t sure what to do. Suddenly he saw a very friendly looking man with the letters PCSO on his back.

“Hurry, Pooh,” he gasped,” That’s a Piglet Carrying Some One! He’ll help us.” And with that he pulled Pooh forward. Suddenly, the crowd surged and knocked Piglet right in front of a big black car.

It stopped, and a man got out.

“What do you think you’re doing?” he asked sternly.

“I’m sorry,” whispered Piglet,” I was trying to get through to see the Queen, but I fell over.”

With that the man smiled and, scooping up the two of them, he opened the car door and sat them on the seat opposite a very kind looking lady.

“Are you hurt?” she asked, looking worried.

“Not really,” said Pooh, who wasn’t quite sure what was happening. “But I would like some honey.”

“Why don’t you come and have some lunch with me?” she asked, “There may be some honey there.”

So off they went to Harvey’s Brewery for a lovely lunch, with lots of other people, and a special jar of honey for Pooh.

“What a busy day,” Piglet yawned when they got home, “It’s just a pity we didn’t get to see the Queen!”

Winnie the Pooh is the world’s most beloved bear, having made his debut in 1926 in the first book of Pooh stories written by A.A. Milne featuring the exquisite illustrations of E.H. Shepard. With a rich storytelling heritage, Winnie the Pooh and his friends in the 100 Acre Wood represent friendship, simple joys and the curious yet gentle nature of a child’s imagination. Winnie the Pooh is supported across the Walt Disney Company through a full-length feature film released in April 2011, consumer products, live entertainment, an online presence, park attractions, DVD/Blu-Ray, as well as books and magazines that reach hundreds of millions of readers across EMEA every year.

This entry was posted on Friday, February 28th, 2014 at 1:38 pm and is filed under Books. You can follow any responses to this entry through the RSS 2.0 feed. You can leave a response, or trackback from your own site.