As an Italian I am certainly biased when I list ten reasons to like Inspector Montalbano, the beloved Sicilian detective who adopts unusual methods to catch criminals. In Italy everybody knows and likes Commissario Montalbano’s adventures in Sicily thanks to two TV series which are super hits at international level. Even BBC4 shows them with Italian subtitles.

Here are ten reasons to like Andrea Camilleri’s Sicilian police inspector and most charming commissario ever created in literature and films. 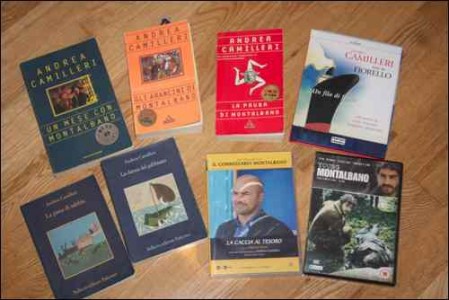 To offer you unbiased feedback on Montalbano, I have asked two amazing English speaking journalists and this is what they had to say.

I discovered Montalbano by accident one night when there was nothing on the telly. After half an hour, I was hooked. Luca Zingaretti’s (the older Salvo) appeal was obvious, but there was more.

Being bathed in Sicilian sunshine was the perfect antidote to a British winter evening, I could almost smell all that delicious food and there was that beautiful home overlooking the beach. Best of all there were the characters – bumbling Catarella, ever-reliable Fazio, ladies’ man Mimi and the shrewd but fallible Montalbano himself. The plots were almost incidental and, after two hours of listening to Italian, it felt like I was fluent as well. I wish …..

Put all that together and you have the recipe for a programme I enjoyed so much that I started on Camileri’s books. The tone is different to the series – more cynical and ironic – but they’re more than enjoyable in their own way. I’m only up to number two, but give me time …..!

Who would have thought that we could fall crazily in love with a balding, bandy-legged Sicilian police inspector? When Commissario Salvo Montalbano took over our Saturday evenings, it was like emerging out of a dark tunnel of Scandi noir into a bright new world of Sicily’s sparkling sea, sun-baked countryside and beautiful baroque architecture.

Salvo, as personified by Luca Zingaretti, is the ideal man. He’s sensitive and tender, yet able to play the tough guy when the occasion demands and is possessed of almost supernatural powers of perception, intuition and emotional intelligence – except where it concerns committing to his absent girlfriend Livia. A principled fighter for justice, not intimidated by the Mafia, he’s also not afraid to bend the rules to achieve his ends.

He exists in a glorious, old-fashioned yet also timeless place where the streets are empty of traffic and the pavements of pedestrians, where even the police station has the architectural grandeur of a palazzo and every visitor has a story to tell – and is given the time to tell it. It’s a world of operatic gestures, exaggerated emotions and bluff – yet where everyone says what they’re thinking and feeling, except for the enigmatic Livia. In the world of Inspector Montalbano, everything is personal. There’s room for humanity, with all its faults and foibles.

On chilly British Saturday evenings, we can vicariously share his pleasure in delicious seafood and a bottle of his favourite white wine on the inviting terrace of his enviable flat on the beach. Armed with a tray of his beloved arancini, I can imagine dining with him on that seductive balcony. He won’t be able to resist them – or me. 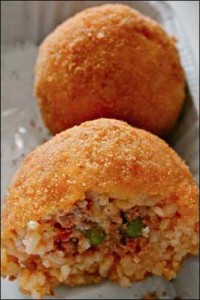 And, unusually for a prequel, The Young Montalbano effortlessly slots right in. Even though it’s set twenty years earlier, nothing is different, except for Salvo’s hairstyle.

The Soundtrack to the TV series

I am madly in love with the music that has been created for the series. Make up your own mind. For me the soundtrack is simply amazing also as standalone songs (beautifully sung in Sicilian by Olivia Sellerio ).

This entry was posted on Tuesday, February 23rd, 2016 at 11:45 am and is filed under Books. You can follow any responses to this entry through the RSS 2.0 feed. Both comments and pings are currently closed.