For curious young minds who ask why? how? what? when? and then why? again and again, the bestselling team behind ADA TWIST, SCIENTIST  have developed a STEM project book based on the beloved character: ADA TWIST’S BIG PROJECT BOOK FOR STELLAR SCIENTISTS! 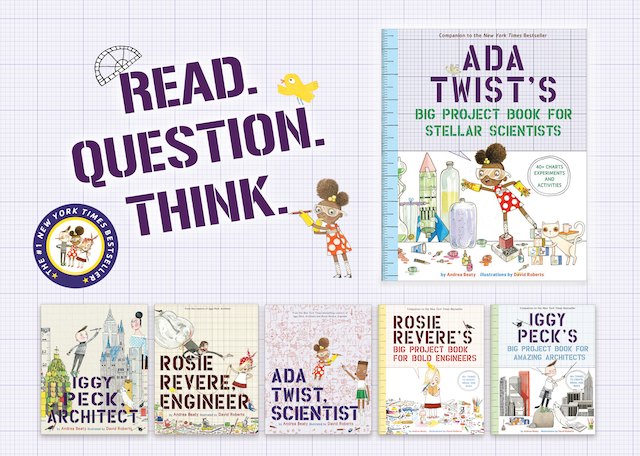 Ada herself will take readers through the scientific method and show them how to build experiments to find the answers to all kinds of burning questions. Budding scientists will solve everyday mysteries and come to think more critically about the world around them. Like the others in the series, this project book is a celebration of STEM, perseverance and passion.

Inspired by real-life makers such as Ada Lovelace and Marie Curie, Ada Twist, Scientist champions girl power and women scientists, and brings welcome diversity to picture books about girls in science. Touching on themes of never giving up and problem solving, Ada comes to learn that her questions might not always lead to answers, but rather to more questions, and she’ll feed her curiosity in the way a young scientist should.

If Ada Twist, Scientist inspires you, then meet Rosie Revere, Engineer and Iggy Peck, Architect! Rosie Revere may seem quiet during the day, but at night she’s a brilliant inventor of gizmos and dreams of becoming a great engineer. During her engineering escapades, she learns that you only truly fail if you quit. Iggy Peck, meanwhile, has been building fabulous creations since he was two and must win over a disapproving teacher. Both also already have their own project books packed full of fun and empowering engineering and architecture related activities!

This entry was posted on Tuesday, April 10th, 2018 at 9:22 am and is filed under Books. You can follow any responses to this entry through the RSS 2.0 feed. Both comments and pings are currently closed.