The host of Mock the Week, Dara Ó Briain, is one of the best-known faces in comedy, but he also has a long-standing, deep-rooted love for space. A mathematical physics graduate from University College Dublin, he fronted Stargazing Live alongside Brian Cox until 2017. Now he has written his third children’s book – and his second on the topic. Is Anybody Out There? explores how life begins in the first place, how Earth was created, whether aliens might exist elsewhere in the solar system, the search for other planets like our own, and the possibility of ever meeting aliens. The book is actually for everyone from ages 8 to 80! Kids and grown-ups will enjoy it. 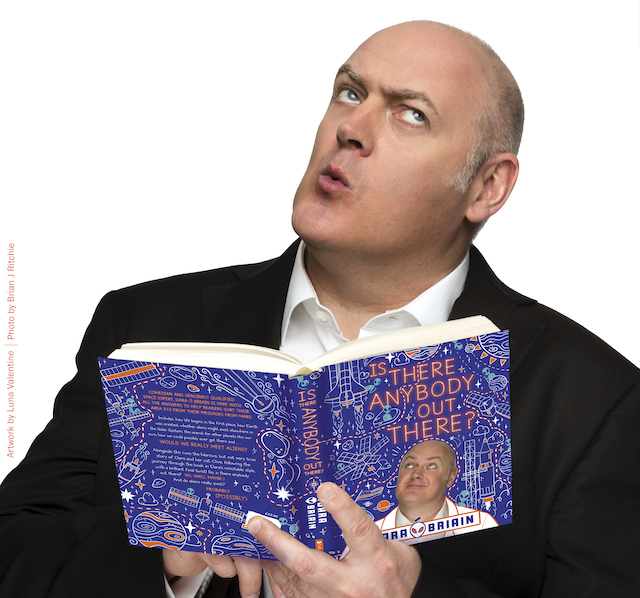 Dara Ó Briain regularly sets up his telescope to gaze at the night sky, searching for planets, comets and distant stars. “I’ve exhausted my family,” says the Irish comic. “Every time I try to show my daughter something on the computer, she says, ‘Please, not another blurry star photo’.”

To be honest, Dara, I was a bit anxious about interviewing you. Comedians usually outsmart most people….

In your latest book Is Anybody Out There? you explore how life begins in the first place and whether anyone is looking back at us from space.

DOB: It’s a book about alien life but it uses that as a base, as a jumping off point to talk about all sorts of things: How do you create a solar system or a planet? What are the chances to find life somewhere else? How many planets are there at the moment? In 1995 we discovered that there are planets outside of our solar systems: at the last count it was 4500 thousand other planets. On average there could be one planet or more for every star you see in the sky. Life is very unlikely but there are a lot of places where it could happen.

This book flows and is not like those big books about science. 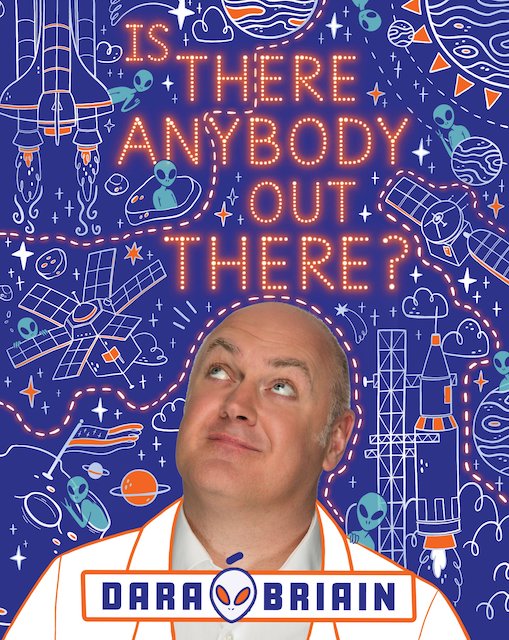 You have clearly put lots of thoughts in this and you must have an idea of how these aliens and creatures look like ….

DOB: We don’t know what environment they’ll grow up in. In our planet we have managed to create everything from sleuths, to parrot to gorilla. Can you imagine how varied it might be in a completely different environment? It could be warmer, a water-based world… or if it was very cloudy, they might send things by electric pulses or eco location. We struggle to communicate with dolphins or gorillas…

Life has been on this planet for 4 billion years but we have only been able to use radio for a 100. Chances of finding another civilisation at exactly the right period of time are pretty slim.

There’s a chapter called ‘How to send a greeting card to aliens’. How do we do it? I’d like to send one myself.

Your passions for comedy and space clearly collide in this book and in general in your stand-up work. I recently watched the Crowd Tickler Liveshow where you do the hilarious helium gag. Tell me about that Eureka moment when you decided to combine comedy and physics….

DOB: Even I know people who don’t want to hear about  subjects they had in school in a comedy club. But when you find your own audience that gets that stuff you can expand what you are doing. I do other stuff too like jokes about stupidity of SUDO science and the nonsense that people do in the name of fake health. I love that helium routine. Balloons, creepy voices, if we don’t stop making it we will run out of helium which is important to run MRI in hospitals. It should be a major discouragement.

Comedians could be quite powerful as people consciously choose to listen carefully to what they have to say. Can stand-up comedy change the world? How would you like to change the world with your comedy?

DOB: We comedians would love to think that we are modern-day philosophers but actually we are just another voice in the variety of noises talking. People complained that Mock the week was very anti-Brexit because it is very difficult to find a comedian who is pro-Brexit.

But I am very happy to just make people laugh. In that moment, if something else happens, and we can do a bit of educating as well, that’s great, but our ultimate service is just to make people forget, laugh and provide relief.

What tips can you give to someone who would like to become a stand-up comedian?

DOB: All my advice applies to a non Covid world. People gathering in one room is not happening at the moment. That’s the key to it all. Get in front of an audience and try and do any gig you can. If you want to get into stand-up comedy, make videos and put them online or do Tik Toks and build a following that way. For me Tik Tok would have not worked because I am more a spoken word kind of person. Getting into comedy is much easier than the music industry.

What’s the secret of a good joke/gag?

You have to sit in a room and trick yourself into this. Talk to yourself for a while and learn how to deliver. The toughest thing is to sit in a room with a blank piece of paper. The pay-off when you have a happy audience is glorious.

Usually comedians are very serious people in real life. What type of person are you off the stage? What’s your parenting style?

DOB: Maybe the image of the tears of a Clown is a cliché and is not true but comedians often come across as more serious because we are literally not doing the job, we are not joke joke joke all the time but we exist normally. Because we do this job and we spend a couple of hours of laughter on stage, when we are walking around not laughing doesn’t mean that we are not happy. If you behaved like a comedian in real life we would be just shouting, waving your arms around. It would be really strange. You have to function like a normal human being. Because we get a lot out of our system on stage, we have probably less need to be a funny person at parent’s evening drinks or parties. Over the lockdown parents thought my kids were lucky because I could help them with science homework but my children did not think the same. My wife is a doctor so our lives are astonishingly normal.

DOB: Mock the week is back this autumn depending on Covid restrictions. There might also be some social distance comedy gigs in the pipeline but it’s all uncertain at the moment.

And Monica … I think you are plenty funny.

Is Anybody Out There? is published by Scholastic, £12.99

This entry was posted on Friday, December 4th, 2020 at 12:33 pm and is filed under Books. You can follow any responses to this entry through the RSS 2.0 feed. Both comments and pings are currently closed.