Grandude’s Green Submarine is a lovely new picture book and sequel to Hey Granddude! written by one of the world’s most famous and best loved grandfathers, Sir Paul McCartney. London Mums love it and voted it picture book of the week.  Hey Granddude! was a New York Times Number 1 bestseller in 2019, selling 300,000 copies around the world with translations in 32 languages and counting. It introduced a magical grandpa – the eponymous Grandude – who was inspired by a nickname Paul’s own eight grandchildren had given him. Grandude’s Green Submarine is available in hardback, ebook and audio published by Puffin / Penguin Random House Children’s UK. 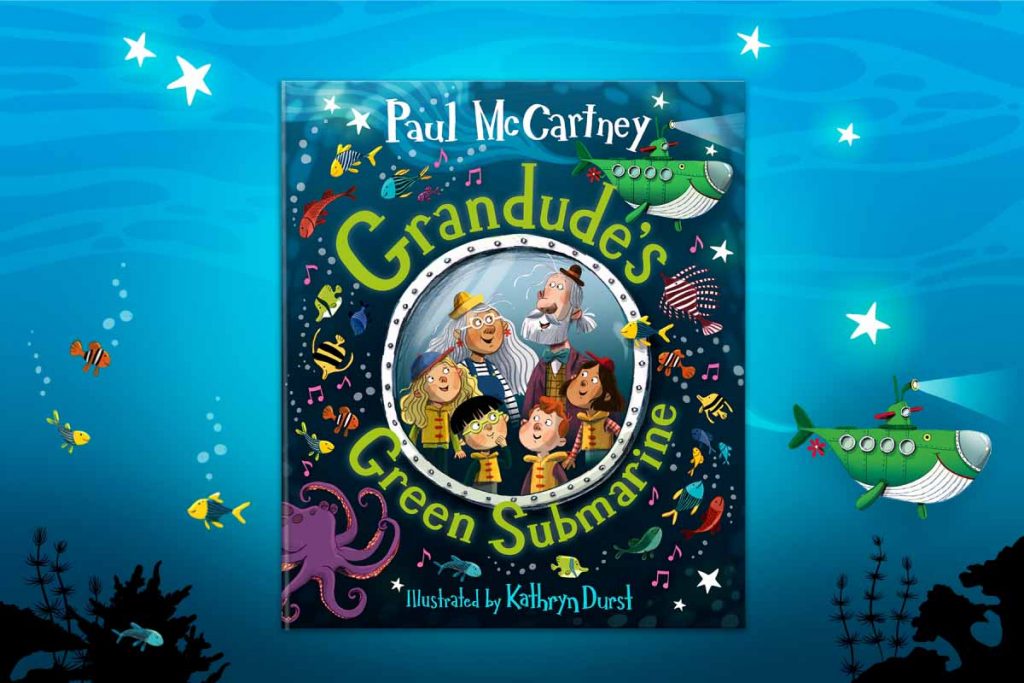 Grandude’s Green Submarine continues the adventures of Grandude and his grandchildren as they set off on a quest to find their music-loving grandmother, Nandude! It’s an action-packed extravaganza of wild imagination and fun for all the family, a read-aloud that’s perfect for sharing, destined to become a timeless classic.

Paul McCartney is one of the most extraordinary wordsmiths and creative talents. London Mums have fallen in love with Paul and Kathryn’s wonderful new character, Nandude, who reminds us of Paul’s former wife and talented musician Linda McCartney.

Paul McCartney said: ‘I’m really happy with how Hey Granddude! was received as this was a very personal story for me, celebrating Grandudes everywhere and their relationships and adventures with their grandchildren. I love that it has become a book read to grandkids at bedtime all around the world. I always said if people liked the first book and there was an appetite for more I would write some further adventures for Grandude – so he’s back and this time with his special invention, Grandude’s green submarine!’

Kathryn Durst, Illustrator, said: ‘I am so thrilled to be collaborating with Paul again on Grandude’s Green Submarine. I think this is the adventure book we all need during this time, when everyone is stuck at home and longing to travel to exciting new places.  I really enjoyed drawing the newest character in the book, Nandude, particularly because we both share a love of playing the accordion!’

Paul McCartney is one of my favourite musicians of all time.

Since writing his first song at the age of 14, his career has been impossibly prolific and singularly influential. In the 1960s, Paul changed the world forever with The Beatles. He didn’t stop there, and has continued to push boundaries, as a solo artist, with Wings, and collaborating with numerous world-renowned artists. He has received 18 Grammys, and in 1997 was knighted by H.M. The Queen for his services to music. His most recent album McCartney III was Number One in the UK Official Charts as well as Number One on the US Billboard Top Album Sales Chart upon release in December 2020.

Paul is a dedicated philanthropist, passionately advocating for many causes including animal rights and environmental issues. He’s also a very proud grandfather.

This entry was posted on Wednesday, November 10th, 2021 at 11:08 am and is filed under Books. You can follow any responses to this entry through the RSS 2.0 feed. Both comments and pings are currently closed.