Our Bedtime story this week: GOODNIGHT SPACEMAN in collaboration with astronaut Tim Peake

2016 has been quite a year for the European Space Agency and the absolute protagonist of the latest out-of-this-world adventure is Tim Peake, ESA’s first British astronaut who has inspired kids with his regular videos from space during his mission in the past months. He is now the star of a new picture book published by Penguin Random House Children’s UK. GOODNIGHT SPACEMAN, produced in collaboration with astronaut Tim Peake himself and the ESA, is landing in bookshops on 7 April 2016. 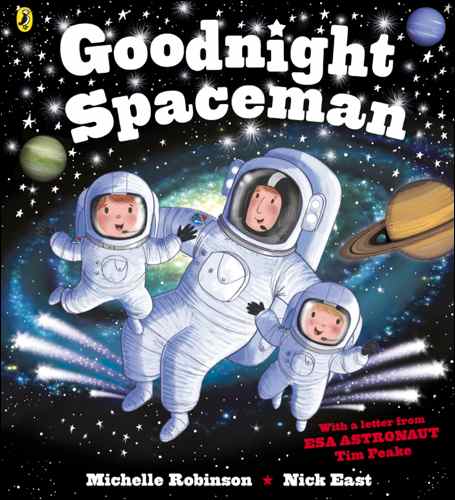 GOODNIGHT SPACEMAN is written by Michelle Robinson and illustrated by Nick East, who also authored Goodnight Digger. The story is inspired by Peake’s mission and his own young sons, Oliver and Thomas, who watched their father, along with the rest of the UK, launch into space last December 2015.

It was an exhilarating moment for space exploration history, because until now Britain had refused to support the ESA human spaceflight programme. Kids were shown the launch of the spacecraft into space on TV at school. This mission is called Principia, after Isaac Newton’s Principia Mathematica (1687), which explained Newton’s law of gravity, and has a very special logo featuring Newton’s apple and the Soyuz rocket, designed by Troy Wood, a 13-year-old who won the BBC’s Blue Peter competition to design the patch.

Peake is working on science experiments checking that the space station is in perfect order. On 24 April 2016 Tim will also run the London marathon on a treadmill. It is the first time that the world gets to be monitoring so closely the astronauts’ work while in space and this is inspiring lots of children to become scientists. 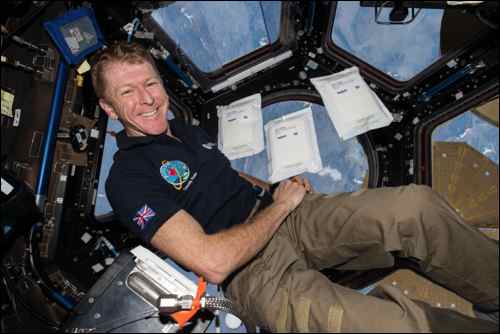 He is scheduled to return on 5 June 2016 but he’s already planning his next trip. Peake once said that one day he would love to go to Mars but unfortunately there are no plans to send ESA astronauts to Mars. Tim may be able to go to the Moon though in the late 2020s. By then technology will be even more advanced and who knows how we will be able to experience Tim’s mission then.

In the meantime, we can enjoy this delightful book that tells the story of two children, just like his sons, who dream of joining their dad on his adventures in space. Before leaving for space, Peake wrote a letter published at the beginning of the book, where he says that he hopes for this tale to inspire a new generation of boys and girls to look up at the stars and not just ask questions but to go and seek answers of their own.

This book will certainly achieve a mission of its own, i.e. excite children about space discovery, whilst harnessing their love of reading.

This entry was posted on Saturday, March 26th, 2016 at 11:05 am and is filed under Books. You can follow any responses to this entry through the RSS 2.0 feed. Both comments and pings are currently closed.