Meet inspiring and much loved author and illustrator Jane Hissey in this exclusive interview for the London Mums magazine. Best known for her Old Bear series, Jane’s beautifully illustrated picture books have been loved by children around the world for over 25 years. 10 years after her last Old Bear title, she returns to write and illustrate for a new generation of readers with three new colourful and exciting characters in Ruby, Blue and Blanket. 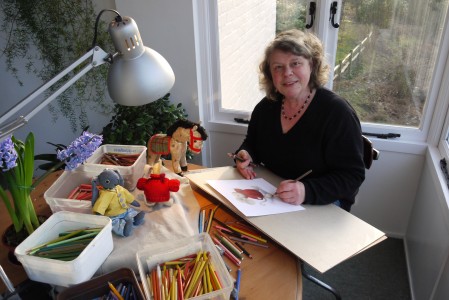 1. How did you come up with the idea for this book?

A book about dressing up is an illustrator’s dream because of all those textures, colours and shapes so I have always wanted to do one. Once I had chosen my little group of characters then the storyline fell into place. I had noticed that, for a lot of children, the experience of dressing up for a fancy dress party or World Book Day at school often meant stepping into a bought, mass-produced costume chosen by a parent. The fun part of choosing, making or adapting a costume seemed to have disappeared. I remember dressing up as Robin Hood as a child but it seems that, these days, girls wear princess costumes or dress as Snow White etc while boys dress as Superman or a pirate.

I used to watch my children having such fun with our dressing up box; wearing great combinations of costumes, hats, wigs and accessories, so in ‘Ruby, Blue and Blanket,’ I let my characters do the same. Writing the story in verse allowed me to make it even more fun!

2. When did you know that you would write for a living?

As a child I always enjoyed both writing and drawing. Later on I had to choose a route to go down so decided to study design and illustration at Brighton Art College. I then went on to teach art for a few years before leaving to be at home with my children. Later, when I was asked to illustrate a book, I decided that if I were to write it too then I could put into the story all the things I really wanted to draw. I suggested to my publisher that perhaps I could write the book as well as illustrate it and they agreed. That first book was ‘Old Bear’ and I have been writing and illustrating ever since.

3. What’s the source of inspiration for your books?

The characters in my books, the objects around me and the games my children (and now my little granddaughter) play with those characters and objects, are all sources of inspiration for my books. I work from ‘life’; setting up the scenes in front of me, and all the characters in my books are real toys that belong to me or my family or friends.
I am always looking for inspiration for books so when I need some now I just offer to do a day’s babysitting!

4. What do you say about Ruby, Blue and Blanket?

I always love working with Old Bear and all his friends but, with an enthusiastic new publishing team at Salariya, it has been a thrill to create an entirely new group of characters; my first for ten years. I have used rhyming text occasionally before and found it fitted perfectly with the lively storyline in Ruby, Blue and Blanket. I love the resulting look and feel of the new book and can’t wait to see what happens to these characters in the future!

This beautifully illustrated book by Jane Hissey (published on 27th February 2013 by Scribblers) is a really sweet story about three animal friends who are bored of playing the usual dressing up games and come up with an idea to mix up all their costumes and have a laugh with each other in the process. It is highly educational as it teaches children that playing games is more fun with friends, that sharing toys and things is much more rewarding than keeping everything for yourself, and finally that in order to have fun you have to be auto-ironic and learn how to laugh about yourself. We absolutely adore it and we will read it again and again. We will also use this book as inspiration for our London Mums art club, where the kids are inspired by storytelling to learn how to draw.

Ruby in particular doesn’t know what to be; a cowboy, a witch or a ghost in a sheet? ‘I just can’t decide!’ she cries. Luckily Blanket’s idea makes everyone happy, but who will win the glittering prize?

With enchanting rhyming text and beautiful illustrations, Ruby, Blue and Blanket is a story that will delight fans of Jane Hissey everywhere – old and new.

Richly illustrated in coloured pencils, Jane’s books feature soft-toy characters and everyday objects that belong to her or her family. Old Bear himself was given to her by her grandmother when she was born. He has travelled with Jane throughout the world; to schools, libraries and literary events, becoming increasingly worn and threadbare but still recognisable to millions of Jane’s readers.

Jane has written and illustrated over 20 picture books and sold over 7 million copies. The Old Bear series of books (published for the first time in 1986) won her worldwide acclaim and featured in a BAFTA award winning TV series, written by Jane herself. he Old Bear series remains consistently in the ‘most-borrowed from public libraries’ list. 40 episodes were produced for the BAFTA award-winning television series and the series was seen in 90 different countries.

Jane has 3 grown-up children and lives in East Sussex with her husband Ivan, who is also an illustrator.

Tags:  books books' reviews children's books' reviews poetry for children
This entry was posted on Monday, February 25th, 2013 at 9:00 am and is filed under Books. You can follow any responses to this entry through the RSS 2.0 feed. You can leave a response, or trackback from your own site.