Just when I had a hate moment against all technology, I came across an interesting book called IRRESISTIBLE: WHY YOU ARE ADDICTED TO TECHNOLOGY AND HOW TO SET YOURSELF FREE recently published by VINTAGE paperback (Penguin UK). I enjoyed reading it due to the focus on technology and childhood. 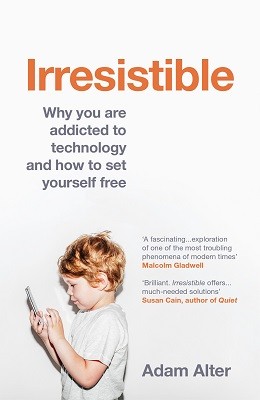 ‘Kids aren’t born craving tech, but they come to see it as indispensible. All day, every day, they share hundreds of millions of photos on Instagram, and billions of text messages. They don’t have the option of taking a break, because this is where the come for validation and friendship.’

‘The average child spends more time communicating through screens than she does face-to-face, spending approximately a third of her life, over seven hours a day, engrossed in screens. There is a relatively small window during childhood for developing social skills and if kids miss out on the chance to interact face-to-face, they may never acquire those skills.’

And if you’re wondering just how long we’ll spend mindlessly scrolling during our lifetimes, the conservative estimate is ELEVEN YEARS.

Alter also takes as through the history of behavioural addiction via a fascinating look at the tactics employed by tech companies to hook us in (Netflix next episode countdown….), the addicts whose lives have crumbled before the lure of World of Warcraft, the people striving towards goals they barely knew existed before the Internet (Inbox Zero) and the man who hired someone to slap him in the face every time he opened Facebook.

Irresistibile is what technology feels to all of us with very few exceptions.

The book Irresistible starts by saying that tech giants such as Steve Jobs never allowed their children to use computer devices probably because they knew far too well the dangers of becoming addicted to them. Tech entrepreneurs recognise that the tools they design and promote are engineered to be irresistible and will encourage users to adopt them indiscriminately. The problem is that modern tech is efficient and addictive compared to the clunkier tech of the 1990s and 2000s.

With his ‘surviving manual’ Author Adam Alter aims to provide sound and practical advice for us to restore the balance that existed before the age of smartphones, emails, wearable technology, social networking and on-demand viewing.

He explores the reasons behind behavioural addictions and the solutions to defeat them.

After mentioning highly addictive games such as war of Warcraft I thought ‘I am safe. I have no tech addiction because I hate video games’ only to read the following chapter talking about the addiction to fitness watches and then I said to myself ‘I’m trapped!’. Indeed steps trackers are also intrusive technologies hard to escape. Tech has made life more convenient than ever, ‘but convenience has also weaponised temptation’.

At this stage I wondered ‘how did we get into this mess in the first place?’

These are behavioural addictions and are only at the beginning – they haven’t reached their peak yet.

Vr and other immersive experiences will go mainstream in the next decade or so. If human relationships suffer now how will they withstand the future of VR?

The solution is not to abandon tech all together which would be an impossible task but to increase the social interactions with other people and slowly reduce the time we spend in front of screens. The reward is greater than we expect.

This entry was posted on Tuesday, October 10th, 2017 at 11:00 am and is filed under Books. You can follow any responses to this entry through the RSS 2.0 feed. Both comments and pings are currently closed.