Francesca has published over 50 different books and sold over 18 million copies in 24 countries. 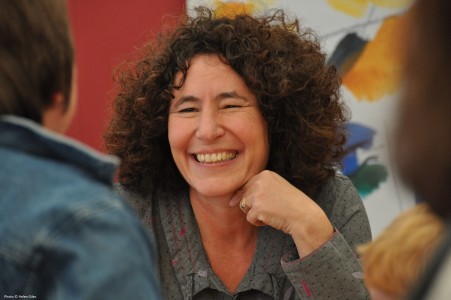 Q: If you were the British Queen for the day what would be the first thing you would do?

FS: I would make sure there was a library in every single school.

Q: Why do you think the favourite Horrid Henry’s book among kids is the Abominable Snowman?

FS: Is that the favourite? Because I believe the other big favourite is Horrid Henry’s Football Fiend. A lot of children also like Horrid Henry’s Nits.  I love the Abominable Snowman but I honestly like all my Horrid Henry’s books so I would not be able to say.

Q: Why did you want to become a children’s author?

FS: Children’s authors have the most fun writing. We get to write silly and fun stories. We have the best readers. So it’s the only kind of writing I’d like to do.

Q: If you were Mayor of London for the day what would you do to improve Londoners’ life?

FS: I would ban all cars so that children could play out in every single street. 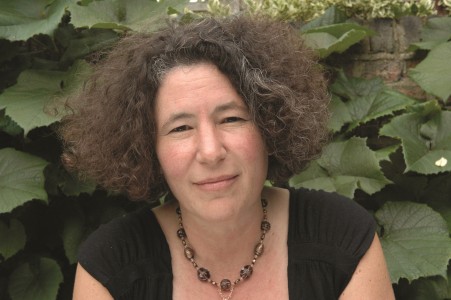 Q: What is your parenting style? Are you like Horrid Henry’s mum?

FS: I hope not! Nobody has ever asked me that question before. Horrid Henry’s mum is me at my absolute worse. I think I’m a fun mother and silly, but I am also strict. I am certainly nicer and funnier than Horrid Henry’ mum.

Q: Where did you get the inspiration for your Horrid Henry’s stories? Do you have such a naughty son?

FS: I wanted to write about a child who was good and bad, and who did not fit into his family. I think families are very funny. I also have a niece and nephew who fight all the time. My son is a very good boy.

Q: Were you a naughty child?

FS: I was very good at school but very naughty at home.

Q: What is the naughtiest trick you have ever performed to someone?

FS: I don’t usually play tricks on people but I played a really good trick on my son once. I moved his clock ahead by three hours so he woke up at 7am one morning and his clock said 10 so he screamed (giggle). He thought he’d missed school!

Q: Does every Horrid Henry’s character remind you of somebody in particular?

FS: It’s a really good question, Diego. In a way yes, but all the Horrid Henry’s characters are aspects of one person. All of us feel like Weepy William at times or anxious Andrew or bossy like Moody Margaret or have a fight with a friend like Sarah. My son was always the very youngest in his class so he would sometimes be like Weepy William and forget things, his PE clothes or a packed lunch for a school trip.

Q: What is your newest book about? What’s new about this title? 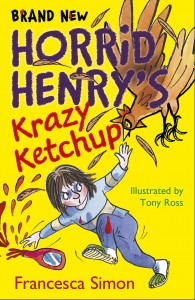 Then I have Horrid Henry’s Chicken. He has to bring the class’ chicken home during the holidays but he is terrified of chickens and does not want people to know how scared he is.

This book is very funny. There’s even a new character called Megaphone Meg. It might be my funniest book to date.

Q: Is there a reason why Horrid Henry is so lazy and bored? Why is Henry so mean sometimes?

FS: It’s because Henry always wants to do everything his own way. He’s bored and angry if he doesn’t get his way all the time. That’s the only reason. He’s only himself to blame if he’s bored. He just does not want people to tell him what to do. He thinks the whole world should run around him.

Henry is mean to his brother Peter because he does not like having a brother, does not like sharing and would prefer to be an only child. All Perfect Peter wants is for people to like him for being so good. But it does not work for him. People do not like him.

Horrid Henry’s Krazy Ketchup by Francesca Simon and published by Orion Children’s Books is out on 5th June 2014, RRP £4.99. 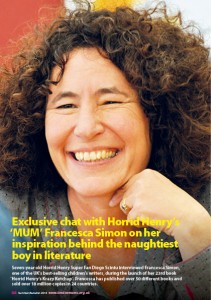 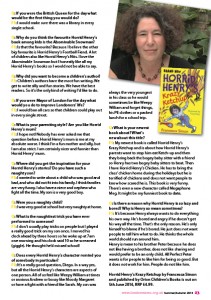 This entry was posted on Sunday, July 13th, 2014 at 12:15 pm and is filed under Books. You can follow any responses to this entry through the RSS 2.0 feed. Both comments and pings are currently closed.