Stories about Knights and Dragons have always been popular with kids of all ages (and parents alike) and this year there has been a revamp of this theme. I am personally very pleased about that!

A lead title was published on 5th June 2014 by Puffin, Sir Scallywag and the Deadly Dragon Poo. This is the second title in the Scallywag series written by Notting Hill based Giles Andreae, the dad of 4 and creator of the phenomenally successful Purple Ronnie , and illustrated by Korky Paul, known for his portrayal of the bestselling Winnie the Witch. Their first collaboration for Puffin, Sir Scallywag and the Golden Underpants, was a huge success and I am sure this epic tale of bravery, chivalry … and deadly dragon poo will provide just as much entertainment and adventure. My 7 year old son loves the fact that the knight child builds a machine that shoots poo as the weapon to defeat the opponents. He would have loved to make it himself 🙂

The story is suitable for children aged 3+. When Baron Greedyguts steals King Colin’s sweet machine, the King knows there’s only one knight who can help – even if he is only six years old. Sir Scallywag and trusty steed Doofus come to the rescue in this epic tale of bravery, chivalry . . .  and deadly dragon poo. 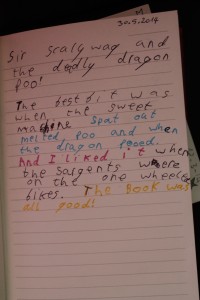 Another fun book about a Knight that has been published this Spring is Peter Bently’s Knightmare Life Stinks! which is perfect for 5–8 years for both boys and girls. Peter is familiar with literary success having won the Roald Dahl Funny Prize.

The brand new Knightmare series follows the hilarious misadventures of a knight in training. Cedric Thatchbottom serves Sir Percy the Proud – a knight famed throughout the land for his glorious deeds. But life at Castle Bombast isn’t quite what Cedric was expecting – in fact, it’s a total KNIGHTMARE!

Roland the Rotten has challenged Percy the Proud to a joust. But the knight refuses to take part because he’s lost his lucky underpants. It turns out that Percy is lying to avoid the fight. With his master’s reputation at stake, Cedric finds himself stepping up to the challenge … what could go wrong?

Knightmare: Life Stinks is packed with laugh-out-loud illustrations, as well as a good dose of battles, puns and poo!

Peter Bently went to ten different schools around the world and studied languages at Oxford University. He started writing for children soon after becoming a parent, and now lives with his wife and children in Devon (which has its very own excellent medieval castle).

Illustrator Fred Blunt never wanted to be an astronaut or drive a train when he grew up. Right from the beginning he knew he wanted to draw silly pictures for a living … and some decades later, he’s living the dream. Fred has worked in editorial and advertising, as well as designing animations for the BBC.

This entry was posted on Thursday, June 19th, 2014 at 12:40 pm and is filed under Books. You can follow any responses to this entry through the RSS 2.0 feed. Both comments and pings are currently closed.