The Emperor’s Nightingale and Other Feathery Tales by Jane Ray (Boxer Books) is a very original storybook compendiums including revisited versions of old classic tales which will become my new classic favourite book of fairy tales. 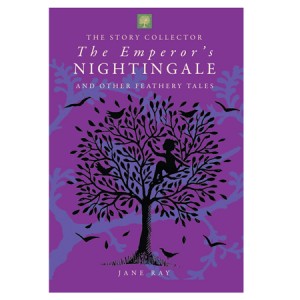 The Short stories are 10 minutes read each and are perfect as bedtime stories.

The new reprint has a fab purple cover and an incredible collection of stories and poems that are guaranteed to appeal to a vast audience. Some of the stories are classics such as “The Owl and the Pussycat”.

My absolutely favourite rivisited story is the ‘Happy Prince’ which such density of messages. It is almost heart breaking. I love the way it’s written, somehow more refreshing than the classic versions. Hats off to Jane for bringing us this collection. It will become one of my new classic books forever.

Jane Ray enjoys the hustle and bustle of London, where she has lived all her life; however, she also has a yearning for
a life by the sea, with long walks along the beach and the
occasional conversation with a mermaid.
She works in a shed at the end of a lovely garden, which
is full of birdsong, hedgehogs and bold London foxes. As
a child she used to climb a tree in her parents’ garden and
sit among the birds, wishing that she could fly.
She shares life now with her husband, three grownup
children and an elderly cat. Even though she loves
gardening, singing and reading, she is happiest in her
studio and says she has the best job in the world.

I love this interview with Jane which tells us so much about the inspiration in her life that brought us such wonderful book.

Q: What gave you the idea for this
collection of stories?

A: I’ve always been a collector – not expensive
things like vintage cars or crystal ornaments, but
everyday bits and pieces: shells and feathers,
useful pieces of string and jam jars. I also collect
stories and when I had so many that I’d run out of
space in my head to keep them, I decided to write
them down and turn them into books.

Q: What did you like most about
working on this collection – the stories
or the artwork?

A: It was a delight to retell these stories
– some old and traditional, some mythic and
legendary, fairy tales, folk tales and made-up tales.
The variety of characters is immense: good and
bad, trickster and magician, prince and pauper.
It was wonderful to be able to illustrate them
too, and I decided that instead of working in
watercolour and collage as usual, I would return
to a technique that I had first tried
as a teenager.

All the illustrations
in these books are done on
scraperboard or scratchboard, where
board is coated with finely ground
white clay and then covered in a
layer of black Indian ink.

The image
THE EMPEROR’S NIGHTINGALE
and Other Feathery Tales
A magical and enchanting anthology,
which includes some of the best-loved
stories of all time.
is created by scratching, with a sharp stylus,
through the black ink to the white clay layer
below. The result is almost like an engraving. The
pictures are very small, which leads you, as an
illustrator, to think in terms of tiny details that
might be missed in bigger pictures.

Q: You’ve described the scraperboard
technique, but there is a fantastic variety
of artwork in the book – with amazing
colours. How did this come about?

A: The stories come from many different
countries and cultures, and this gave me the
added creative thrill of incorporating traditional
patterns from Africa, Inuit animal carvings or
elements of Japanese woodblock prints into the
illustrations.

David Bennett at Boxer Books then
worked his magic with the images,
enlarging, adding colour, cropping
and generally ‘playing around’ with
both the illustrations and the look
and ‘feel’ of the books, until we felt
we had made something really
special.

This entry was posted on Sunday, December 29th, 2013 at 9:00 am and is filed under Books. You can follow any responses to this entry through the RSS 2.0 feed. You can leave a response, or trackback from your own site.