Book of the week: Mona Lisa in New York

Mona Lisa is undoubtedly the most famous painting in the world and has rarely left Paris for safety and security reasons after the epic theft that happened in 1911. An new children’s book Mona Lisa in New York out in March follows Mona Lisa as a tourist who experiences New York for the first time – finding art and inspiration in unexpected places. As a big fan of this iconic painting by my fellow Italian Leonardo I find this book published by Prestel fascinating even as an adult. It’s charmingly written and illustrated by artist Yevgenia Nayberg, an immigrant to New York herself who shows young readers the city she has fallen in love with. Cleverly portraying da Vinci’s iconic subject as a world-weary, know-it-all, Nayberg takes readers on a tour of New York – eating pizza in the Bronx, listening to jazz in Harlem and swimming at Brighton Beach.

Although we can’t travel at the moment, this delightful tale is the perfect way to take young readers on an imaginary journey, and encourage an appreciation of all kinds of art. A MUST-READ for children and parents alike. 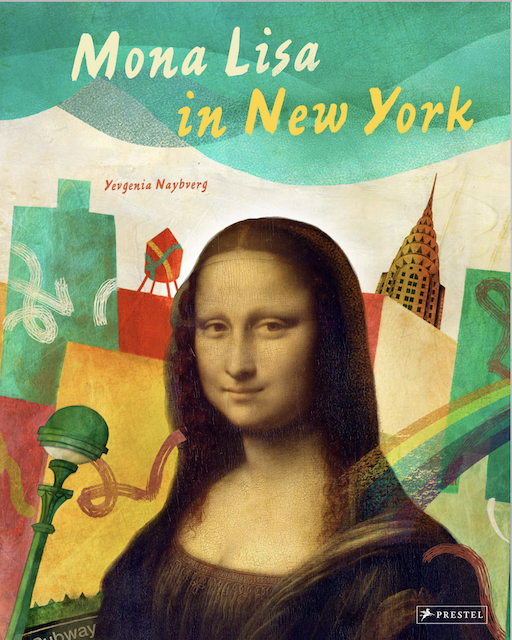 Mona Lisa is taking a trip to New York from the Louvre. Yes, that Mona Lisa. The one with the knowing smile. 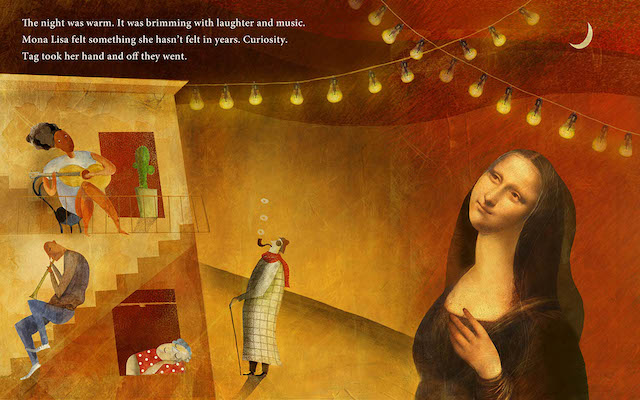 After hanging in the museum for a while she decides to explore the city. She slips out of her painting and meets Tag, a street art figure. He takes her on an adventure from the Bronx, through Harlem, High Line to the Brooklyn Bridge as well as Brighton Beach. It turns out Mona Lisa doesn’t know as much as she thought of the city she loves. As Mona Lisa says goodbye to her new friend, she-and the readers-come away with a profound appreciation of the city and its wonders. 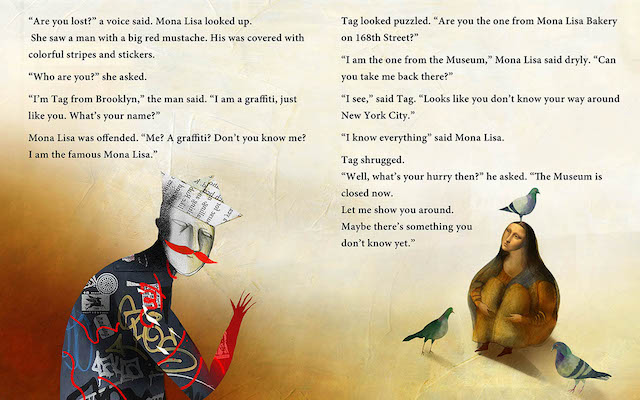 Yevgenia Nayberg is an illustrator, painter, and set and costume designer. Her illustrations have appeared in magazines and picture books, and on theatre posters, music albums, and book covers; her paintings, drawings, and illustrations are held in private collections worldwide. As a set and costume designer, she has been the recipient of numerous awards, including the National Endowment for the Arts/TCG Fellowship for Theatre Designers, the Independent Theatre Award and the Arlin Meyer Award. In 2018 she received a Sydney Taylor Silver Medal for her illustrations for Drop by Drop by Jaqueline Jules. Her debut author/illustrator picture book, Anya’s Secret Society, came out in 2019 and received a Junior Library Guild Gold Selection Award. Her latest book, Typewriter, came out in 2020. Her next book, Mona Lisa in New York, will be published in 2021. Born and raised in Kiev, she now lives in New York City.

This entry was posted on Wednesday, February 3rd, 2021 at 2:03 pm and is filed under Books. You can follow any responses to this entry through the RSS 2.0 feed. You can skip to the end and leave a response. Pinging is currently not allowed.