The first time I saw a book by Steve Antony was The Queen’s Hat at the National Gallery’s shop. I totally fell in love with all his picture books and sense of humour. Just read this interview with Steve to understand why I love him so much. Ah, by the way my 10 year old son Diego also loves his books. With themes ranging from the Queen to ‘saying please’ to the futility of war, Steve Antony’s picture books are must haves in every personal library. Steve has just published a lovely Christmas book, The Queen’s present. It’s most certainly my favorite Christmas book this year. 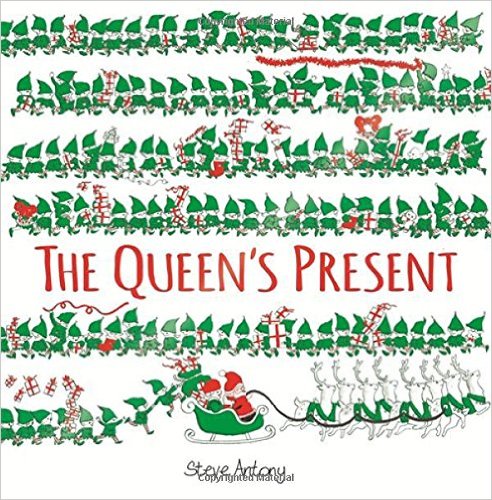 Q: Steve, my 10 year old son and I have avidly read all your picture books many times over. We particularly love your unique style and humour. The Queen’s series is so much fun. You clearly have an interest in the Queen… How do you plan a new story?
Steve: Funnily enough, The Queen’s Hat was quite simply inspired by a photograph I saw in a newspaper. Much of my inspiration comes from the media; and it just so happened that a photo of The Queen, grasping her hat on a windy day, inspired my debut picture book. It was an exercise in design, visual humour and pop art. It is one of many visual stories I illustrated at University, including Please Mr Panda and Green Lizards Vs Red Rectangles.

Planning varies from book to book. The pacing and page turn are really important, and I love injecting my stories and characters with wry, cheeky humour. First comes the idea, and I’ll almost immediately start storyboarding if the idea really grips my attention. I have so many unpublished (and probably un-publishable) and half-baked stories. 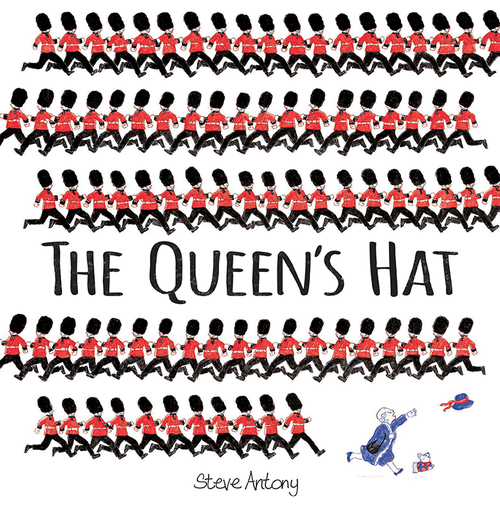 Q: Tell us where you got your inspiration for your first book The Queen’s Hat from.
Steve: I mentioned the photo, but I was also inspired to create a really bonkers, totally unrealistic story featuring a collection of iconic London landmarks. Although I was born in the UK, I was raised in the States, which is probably why the book appeals to tourists. This is a book I would have loved pouring over a kid; it would’ve reminded me of home. The Queen books are about the landmarks and the funny, little details, including the hidden butler on almost every page.
Q: The Queen’s present is a Christmas story with a twist… What would you like for Christmas this year, Steve?
Steve: World Peace. But if I can’t have that, some chocolate would do, I guess. 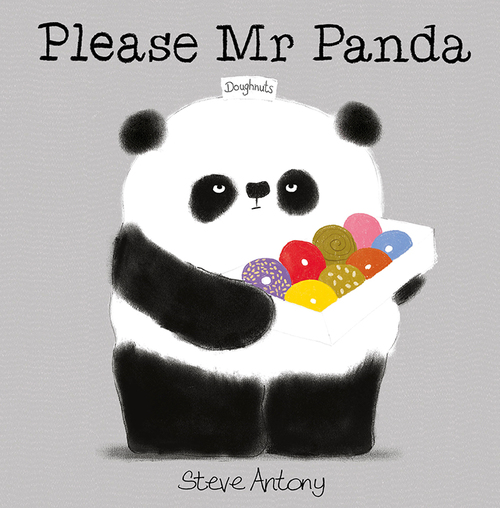 Q: Your other series, MR PANDA tells lots of stories about a grumpy but loveable panda who likes good manners. How much of Mr Panda is autobiographical?
Steve: Well, I love doughnuts. I’ve probably had far too many since the book came out, but how can anyone turn down a doughnut?

Plus, how hard is it to say please or thank you? I like how this book has sparked a conversation on manners.

Q: GREEN LIZARDS VS RED RECTANGLES is an emblematic story about war and peace. What would be a sequel to that story? How much should young children know about history and the consequences of conflicts?
Steve: The book’s original ending would have nicely led to a sequel but it was a little controversial. I’ll save that for another conversation. As it stands, I don’t really feel this book needs a sequel. 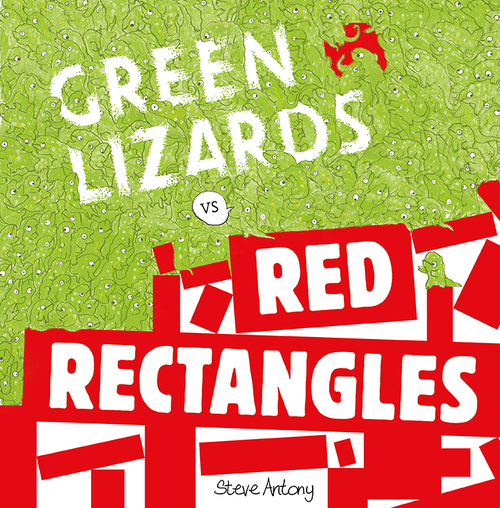 I don’t necessarily feel that very young children need to know the historic details of war, but I do think it’s good to plant a seed that says ‘We can all get along and live peacefully in spite of our differences.’ In the book, the characters don’t even know why they are fighting in the first place!

Q: You are colour-blind, right? Many children are but are not always diagnosed. How much does it affect your work?
Steve: My books wouldn’t look they way they do if it wasn’t not for my colour-blindness. I chose red, white and blue for the first two Queen books because they’re all about London and Britain. I choose black and white animals for the ongoing Mr Panda series for obvious reasons.

For years I struggled until I decided to make up my own rules of colour. That said, I have just finished a new book, which does have a whole range of colours, featuring sunsets, meadows, flowers and array of colourful animals (called Unplugged). There was no way around it because that’s what the story needed. It took me one month to draw one sunset. This book is probably a turning point, so you might see more colours in my future books, but only if the story needs it.

Q: If you were asked to write and illustrate a book to explain Brexit to children, what would you focus on to turn it into a positive and clear story?
Steve: Oh my goodness, that’s a tough question. I’d have to think about that, but what I’d really want to focus on is the issue of divisiveness. These days we have so many labels that constantly define and redefine our place in the world. At the end of the day we’re all Earthlings, we’re all humans, and we all belong. 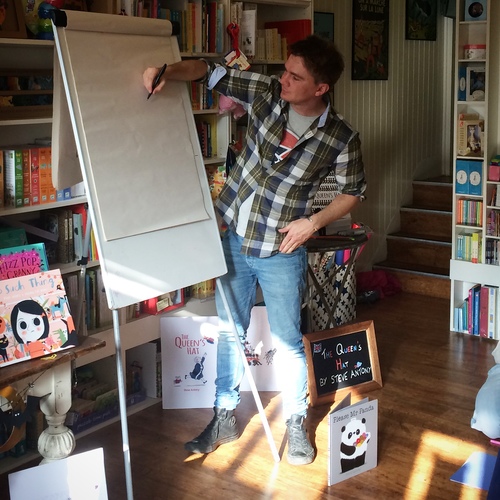 Q: How do you work? What sort of techniques do you use?
Steve: I draw everything with soft pencils and graphite. All of my artwork is in black and white. I have developed a really long, hard-to-explain process in which I deconstruct my drawings and convert the black pencil and graphic lines and marks into colour with Photoshop. I do this because of my colour-blindness. It allows me to easily change and tweak colours without having to draw the whole thing over again.

Q: How would you describe your illustration style?
Steve: I let the story tell the pictures before the pictures can tell the story. The style is directly influenced by the story, which is why the Mr Panda books are so different from The Queen books. I’d describe my style as intuitive.

Q: And finally, if you were King of Britain what would you do first?
Steve: A refit? Honestly, I have no idea, except I’d make sure that every town and city has a library and a bookstore.

Read more about Steve Antony in my other feature.

This week’s bedtime story: The Queen’s Handbag by Steve Antony 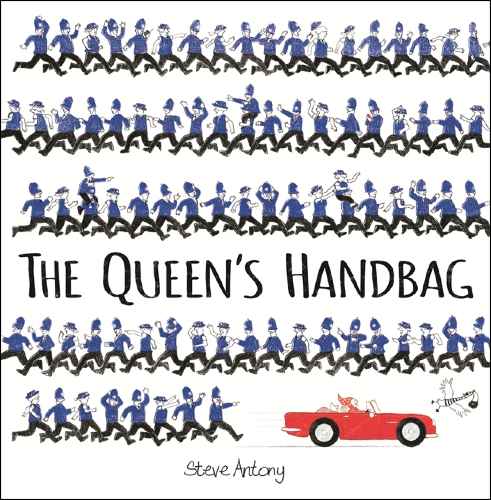 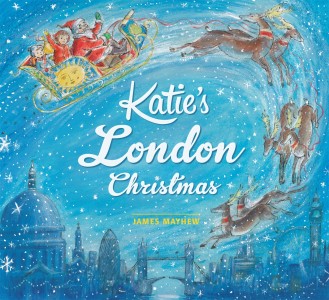 This entry was posted on Wednesday, November 30th, 2016 at 1:45 pm and is filed under Books. You can follow any responses to this entry through the RSS 2.0 feed. Both comments and pings are currently closed.