Travel with kids: A hidden quarter of Paris

France is the world’s most visited country; its capital a tourist magnet.  How is a truly Parisian experience possible at the height of the holiday season?

Try the Canal St Martin, which bisects the 10th and 19th arrondissements in north-east Paris.  It is a part of the city overlooked by mainstream visitors, and by other Parisians, lending it a raffish, slightly undeveloped air.  Still very French in feel, it just doesn’t attract those who prefer to shop on the Rue du Faubourg-St Honore or recline in hotels along the Champs-Elysees.  The canal unmistakeably remains the haunt of the student, the artist, the flaneur. 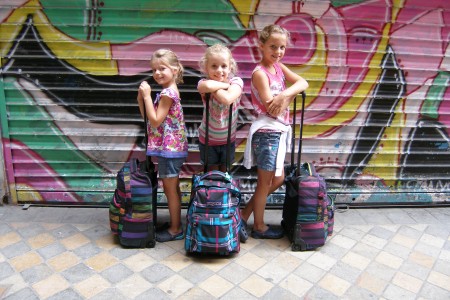 It is easily reached from London, being only a brief taxi ride from the Gare du Nord.  Within 20 minutes of stepping off the Eurostar, this family of five (two adults, three children aged 10, 9 and 7) had collected our keys and settled in to the flat we had rented for a week in July.  Rentals are better value in this part of town, even in high season.  We booked a property on the Rue Albert Thomas through www.apartmentparis.fr, which carries a wide selection of accommodation across Paris. 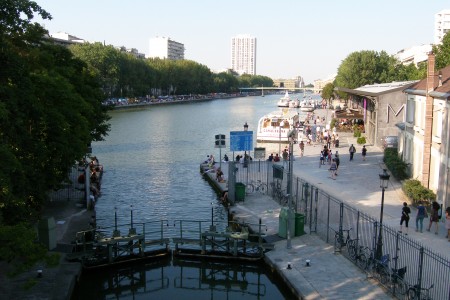 The apartment had two bedrooms, plus a sofa bed in the sitting room, polished wooden floors, and was equipped with all mod cons.  Perched on the second floor of a classic Parisian building, it was reached via a rickety lift and across a cobbled courtyard decked with flowers.  There was a traditional bakery and the Jacques Bonsergent metro station nearby. 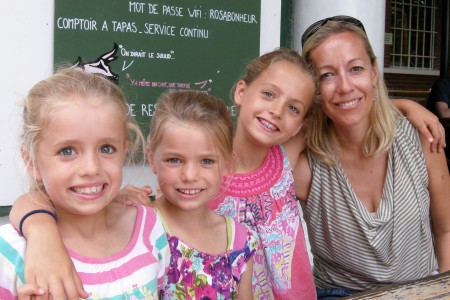 The canal itself was a 5 minute walk away and, like the better known beach which is created alongside part of the River Seine in Paris each year, a section of the Canal St Martin gets the same treatment.  Strolling along one day, we suddenly found the Bassin de la Villette transformed in front of us.  People were playing boules on the sand, while others sun-bathed, jumped through fountains, or bought ice-creams and pastries from the many food stalls.

MK2 is a new cinema and art complex by the canal, and various companies run trips along the waterway by boat.  There are plenty of well-positioned cafes and bars to enjoy as well – Bar Ourcq (Quai de la Loire, 19th) for example allows customers to select a deckchair from its collection, wander down to the “beach”, and sip the afternoon away. 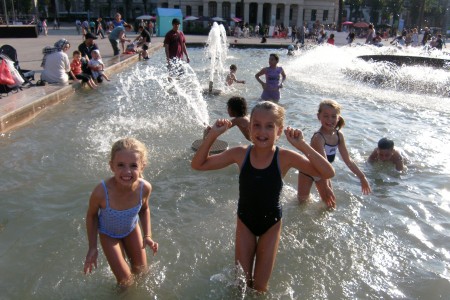 A little further from the canal we bought sticky roast chicken, cheese and wine from the area’s markets – the Marche St Martin (Rue Chateau d’Eau) and the Marché Popincourt (Boulevard Richard-Lenoir, between Rue Oberkampf and Rue Jean-Pierre Timbaud).  In the streets between our apartment and the water, we discovered Chez Prune, La Patache and Le Verre Vole – all recommended.  Rosa Bonheur in the Parc des Buttes Chaumont (19th) was well worth a lunchtime foray; inventive French tapas and plenty of space in which to work off any over-indulgence. 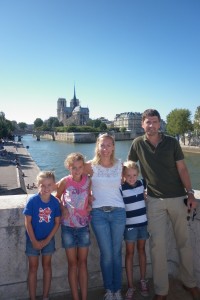 Of course, we occasionally joined the tourist trail.  The Eiffel Tower is always spectacular, and the National Museum of Natural History in the Jardin des Plantes (7th arrondissement) was a hit and not too crowed.  We had parts of the Petit Palais (just off the Champs-Elysees) almost to ourselves.  This is where the City of Paris houses its own art collection – beautiful pieces, virtually without the crowds.  A lovely café nestles in the museum courtyard.

The highlights of this trip however were the simple pleasures offered up by the unassuming streets around the Canal St Martin.  The children visited the local boulangerie each morning to buy fresh croissants and practice their French.  We hung out in local corner cafes, watching the world go past over coffees and citrons-presses.  And, as the family lazed away our days alongside the canal, we soon appreciated we were not just soaking up the rays of the sun, but also absorbing the easy charms of this special corner of Paris.

Ed is a contributor to Family Traveller – for more inspiration and travel advice head to www.familytraveller.com

After 18 years as a partner in a City law firm, Ed is presently enjoying his second gap year. Splitting his time between family life in Warwickshire (hugely-understanding wife Nadine and three daughters), and travelling to interesting parts of the world, Ed is also working on his first film script. He is a keen hiker and scuba diver, as well as being a great fan of the Middle East. A week of walking and wine in Georgia is in the pipeline.

This entry was posted on Tuesday, July 8th, 2014 at 12:10 pm and is filed under Travel with kids. You can follow any responses to this entry through the RSS 2.0 feed. Both comments and pings are currently closed.