Lonely Planet guidebooks have been the only book companions during my world travels since 2000 because of their no-nonsense approach and real practical advice. I have always felt that they were the only travel guides I could trust as they shared my interest for genuine and non touristic locations when visiting new countries. The latest guide to be published is a spectacular book, the Lonely Planet’s Ultimate Travelist, the definitive bucket list for every type of traveller accompanied by stunning photography. 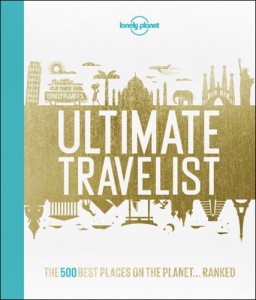 To create this guide, Lonely Planet’s team of travel experts and authors on the ground rated the world’s best mega-sights and hidden gems, bringing together this beautiful new book, and what they believe to be the 500 best places to visit in the world. Lonely Planet’s experts whittled down a list of every single sight featured in their tried-and-tested guidebooks to almost every destination on the planet until they had, in their view, the very best spots. Ranked in order of their brilliance, Lonely Planet’s Ultimate Travelist highlights the places the globetrotters at Lonely Planet believe every traveller must experience.

You can clearly appreciate that this book has been years in the making. Every traveller has got a list of places they simply have to see – places heard about, read about or dreamed about. What makes somewhere special is different for everyone but this is a definitive list by Lonely Planet’s globetrotters who want to inspire many other travel wishlists. It’s so well written and accompanied by wonderful photographs that you can spend days reading it or simply flipping through the pages.

The Temples of Angkor in Cambodia receive the accolade of being the world’s number one must-see sight according to Lonely Planet’s experts. Described as the “Hindu heaven on earth,” this “complex of more than 1,000 temples, shrines and tombs that form a virtual city of spires in the jungles of northern Cambodia,” take the crown. 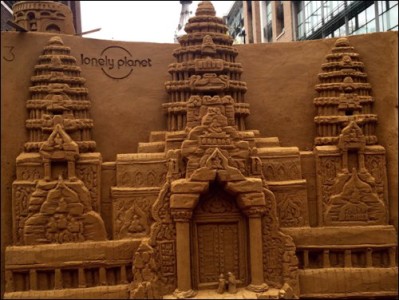 The Temples of Angkor are hotly followed by Australia’s Great Barrier Reef – “a psychedelic underwater playground”; Machu Picchu in Peru – “mind-blowing” and “a proper enigma”; the Great Wall of China – “an awe-inspiring maze of walls and fortifications”; and India’s Taj Mahal which “still presents a misty window through time”.

The British Museum in London is the UK’s highest-scoring sight. Coming in at number 15 makes it one of the highest-ranking sights in the world. The British Museum staked its claim to a top spot thanks to being “the great treasure house of Europe” and is praised as “a grand Greek Revival temple to treasure hiding an unexpected Norman Foster canopy over its vast central courtyard”. Visiting the museum is described as “a pilgrimage for fans of antiquity”.

Although I could not make the actual event this Summer, I saw the images of the PR campaign around the launch of this title. For a limited time, Lonely Planet enabled people to get a taste of some of the world’s most beautiful landmarks a little closer to home. The sights unfurled before viewers’ eyes in a five-sided sand sculpture of grand scale, which was based in one of London’s most stunning thoroughfares, with views across to St Paul’s Cathedral, Millennium Bridge and the Tate Modern. Over the course of five days, one new completed landmark was revealed each day. 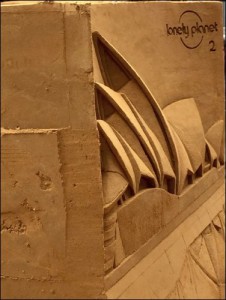 From Tuesday 18 until Saturday 22 August 2015, Londoners – and visitors to the city – had the chance to see some of the world’s most wondrous landmarks taking shape before their eyes as a selection of iconic travel sights were built from sand. Three of the world’s finest sand sculptors (Mark Anderson, David Hicks, Martijn Rijers) recreated five amazing sights from around the world on Peter’s Hill in central London (ECV4, closest tubes: St Paul’s, Blackfriars or Mansion House). 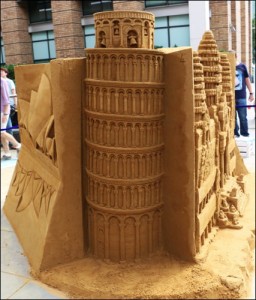 I am clearly not the only Lonely Planet fan. In fact, in 40+ years the travel publisher has printed over 130 million books in 13 languages to almost every destination on the planet. It also boasts mobile apps, a complete eBook portfolio, an award-winning website, and a dedicated traveller community.

How many destinations have you covered out of the above Top 20? Please leave your comments below if you feel like sharing that with London Mums.

Tags:  Lonely Planet travel Travel guidebooks travel with children Travel with kids
This entry was posted on Friday, September 25th, 2015 at 11:10 am and is filed under Travel with kids. You can follow any responses to this entry through the RSS 2.0 feed. Both comments and pings are currently closed.