Nobody is better than our popular guest blogger Priya Desai, an independent speech and language therapist who works with young children in schools, to advice parents on how to help kids to be good at spelling. Her Monkey Jake is funny and kids just feel a bit like him. Priya through Jake inspires and encourages children to have fun with their spelling tests. 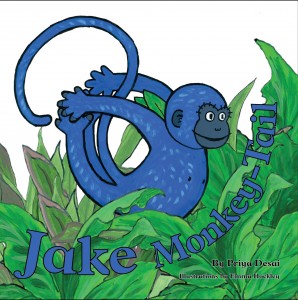 Jake Monkey-Tail is a story about a fabulous, colourful little monkey who lives in Monkey Jungle. Every day Jake goes to Monkey school. He has one problem though and that is, that he cannot spell! Every week, Jake gets zero or two out of ten for his spelling test. He realises that he needs to learn how to spell properly if he is ever going to get through school. One day, after a particularly bad spelling test, Jake swings into a magical part of Monkey Jungle. He finds himself surrounded by hundreds of sparkling and dazzling letters. It is there that Jake meets the wise Spelladictionary Monkey, who then guides him in learning to spell in an enchanting and engaging way. Jake soon feels ready for his first 10/10!

You may be interested in reading other articles on how to get your kids to be good at spelling on our site:

Priya Desai is an independent speech and language therapist who works with young children in schools. Priya grew up in London and attended both school and university there. She graduated from UCL in 2004, with a Bsc in Speech Sciences and then began her career as a Speech and Language Therapist, gaining experiences both in the NHS and private therapy sector. Priya has been working enthusiastically as an independent therapist for almost four years now.

Priya’s career as a children’s author was accidental and unintended. She was inspired to write a story about handwriting, by a young boy who she worked with that had difficulties with handwriting. After careful consideration, Priya was more attracted to the appeal of putting a book together and fulfilling the idea of writing and producing a book, as opposed to being an author. It was while she was putting her first book, Benjamin Writer-Messy together, that she noticed the potential of the type of books she could offer to the children’s book marker – entertaining stories with an educational component that children can relate to and learn from. Hence, Jake Monkey-Tail soon followed.

Priya has many more stories to tell and looks forward to continuing to learn about writing and how to produce wonderful children’s books.

Tags:  back to school children's books' reviews schooling spelling
This entry was posted on Thursday, August 2nd, 2012 at 9:16 am and is filed under Blog, Books, Parenting Skills, Schooling. You can follow any responses to this entry through the RSS 2.0 feed. You can leave a response, or trackback from your own site.