Spanish-English bilingual in England. To be or not to be is not the question! How to be it? Is.

Having lived in London for over 17 years it has always amazed me when I come across people whose parents or grandparents are from a different country and they don’t speak anything other than English. Often they say ‘I understand it but I can’t speak it’. I always thought their parents did something wrong! Now that I have children of my own I realise that it is easier than I thought to just let a language go, especially when parents have different first languages to each other and to the local community. 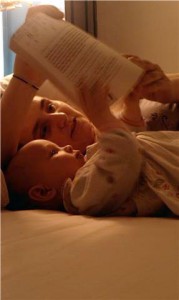 It has to become a really conscious effort in a list of ‘things to do’ that grows every time you look at it. Families in London are already stretched to fit work, activities, play dates, homework, dinner, bath, a fight or two, some t.v. and making space for that elusive ‘quality time’ together. If then you have to add to that people speaking to each other in different languages, it can get difficult!

In our house we are all Spanish and we speak Spanish all the time (supposedly the home language vs community language method) unless there are people around who don’t speak Spanish, we watch T.V. mainly in English, half the books we read to the children are English and half Spanish and the same with games and songs, so we ‘generally’ speak Spanish.

When my children were born I worried they would not be bilingual and therefore would be cut off from a big part of who they are, of understanding who their parents are, cut off from a huge, fun, warm family and having a relationship with their three great grandmothers who are still alive!

If i didn’t help them with Spanish growing up in London, they could be missing out on the ability to communicate with another 500 million people worldwide who speak the language, reading ‘El Quijote’ in its original language, watching ‘como agua para chocolate’ how it was filmed or travelling around 21 countries learning the most they can from different cultures whilst using their native language and feeling like at home.

So my main worry was reading and writing rather than speaking. I would have to teach them myself. And from that motivation Ole Kids was born.

I am really grateful for all the wonderful friends my children and I have made in the past two years through Ole Kids. My children definitely have a better chance of using both languages equally since they now have a strong incentive to do so being part of a spanish speaking community. Research shows it  is often children who chose to give up a language because they don’t have a community to speak it in. www.sociolinguistica.uvigo.es

It is a real privilege to create that space for my children but also for all the other families in London who are interested in Spanish and the cultures that come along with it.

We have seen so many children grow and start using the language through just one hour of class a week that we have surprised ourselves in how effective it is!

So look out for us! Join us! Let’s make that sunny space around us and open a world of opportunity for our children!

Tags:  bilingual churros feed the family feeding the family flores de carnaval multilingual pancake day recipe - carnival-recipe - recipes social media magic Spanish classes
This entry was posted on Monday, February 13th, 2012 at 1:27 pm and is filed under Activities, Parenting Skills, Schooling, South West London. You can follow any responses to this entry through the RSS 2.0 feed. You can leave a response, or trackback from your own site.