Who was Saint George?

Every year on 23 April, England celebrates Saint George’s Day. But do we really know who Saint George was? Recent research shows almost quarter of primary school kids don’t know who England’s patron saint is. Let’s get some facts right about this venerable hero and martyr. 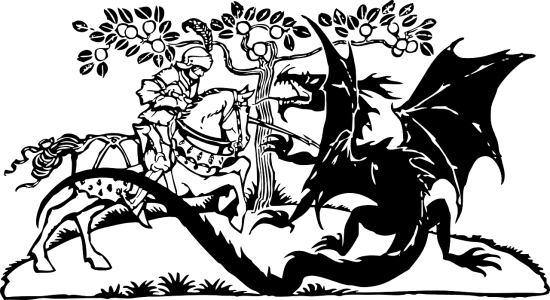 On St George’s Day, a study by Fun Kids Radio has found that almost a quarter of primary school age children [21 per cent] have no idea who St. George actually is.
Although nine in ten children (91 per cent) had heard of St George, when asked who he was, the survey of over 200 children aged four to fourteen reveals that:

·     two per cent thought he had gone to the moon

·     one respondent even believed that he was ‘a person on Xbox’.

Perhaps more surprisingly, when asked why St George is well-known, five per cent thought he married Queen Victoria.  One child even believed he was on the winning 1966 England World Cup football squad.

However in the run up to the Scottish independence referendum, St George actually fared better than St Andrew, as only 65 per cent of kids had heard of him.

One in five (21 per cent) kids surveyed thought he was famous for upsetting the Queen and 14 per cent actually thought he was responsible for the famous dragon-slaying.

One child even thought St Andrew was he was the first man in space, and one was convinced St Andrew is the name of the king’s horse.

The legend of St. George slaying the dragon seems well-known by adults (is it really?) but the new high tech kids generation is not aware of what St. George’s Day represents!

For the kids’ and adults’ alike sake, let’s get some facts straight on one of the most venerated saints in the Catholic, Anglican, Eastern Orthodox, and the Oriental Orthodox churches.

Georgios (which in Greek means “worker of the land”) was born to a Greek Christian noble family and became a soldier in the Roman army. He is regarded as one of the most prominent military saints for many churches and is immortalized in the tale of Saint George and the Dragon as well as being recognised as one of the Fourteen Holy Helpers.

He was later venerated as a Christian martyr due to the courage of his faith and death as a defender of his Christian faith.

In the year AD 302, Roman Emperor Diocletian issued an edict ordering the arrest of every Christian soldier in the army and a sacrifice to the Roman gods by every soldier. George objected and opposed Diocletian who was upset, because George was one his best tribunes. But George did not care about that and proudly declared himself a Christian and a worshiper of Jesus Christ. Diocletian attempted to bribe and convert George to the pagan faith, but without success. George never accepted. At this point Diocletian was left with no choice but to have George executed for his refusal. Before being executed, George left all his wealth to poor people. He was brutally tortured (one of this torture included laceration on a wheel of swords from which he was resuscitated three times) and eventually executed by decapitation on 23 April 303. 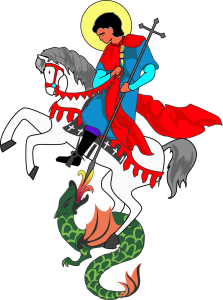 The legend of St. George and the Dragon was brought back by the Crusaders. It is thought that St. George travelled for a long time until he came to Libya where he met a hermit who told him that a dragon was ruling his country and demanding sacrifices of young girls. The only girl still alive was the the king’s daughter but she was about to be sacrificed. The king promised his daughter in marriage to the valiant dragon slayer. 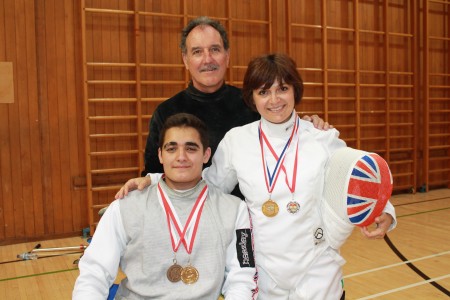 As soon as he heard the story, St. George he headed to the dragon and confronted him after sending back all women sacrifices. The dragon roared at his sight but St. George faced him fearless. He wounded the monster with his spear, but did not kill it. He fell from his horse and rolled under an enchanted orange tree that protected him from the poisonous dragon.  He fought the beast with his sword, and after a long battle he managed to defeat the dragon.

His emblem, a red cross on a white background, is the flag of England, and part of the British flag. St George’s emblem was adopted by Richard The Lion Heart and brought to England in the 12th century.

Personally I love this story and it brought me luck somehow. In fact, a few years ago when my son was at nursery school I watched an exhibition of fencers from a local secondary school to the young kids and their parents on St George’s Day. They left a few leaflets behind promoting the local fencing club and their adults beginners’ courses. Since then (only 3 years ago), I have been training as a fencer and absolutely love this sport. I never was very sporty but this suits me and thanks to St George I managed to get some sporting medals and cups for the first time in my life. Better late than never! Thanks St George for bringing so much luck and satisfaction to my life!

This entry was posted on Wednesday, April 23rd, 2014 at 12:40 pm and is filed under Schooling. You can follow any responses to this entry through the RSS 2.0 feed. Both comments and pings are currently closed.