According to a new research, children are not getting access to basic drinking water requirements at school, despite Department of Education guidelines. This is particularly sensitive now that the government plans to allow childminders and nursery staff to look after more children in England. 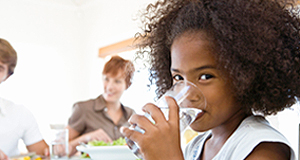 The survey carried out by the Natural Hydration Council (NHC) with Netmums included in-depth focus group activity as well as a survey of more than 1,000 parents of children aged 4 – 10 years old across the UK. Over 60% of parents across the UK say their child’s school does not provide water throughout the day. Worryingly, 64% of parents say that water is banned from classrooms and 73% say there is no access to water via water fountains. This is despite Department of Education guidelines stating that the Local Authority or governing body must ensure that pupils have easy access at all times to free, fresh drinking water on school premises.

The majority of parents also said that their children are thirsty when they get home from school (69%), and almost half of parents (43%) regularly notice other signs of dehydration in their children, including tiredness and irritability.

Whilst 91% of parents accept chief responsibility for their children’s hydration habits, almost two thirds (63%) didn’t know how much fluid their child should be drinking and a quarter (25%) of them are not giving their children a drink to take to school.

Nutritionist and advisor to the NHC, Dr Emma Derbyshire, said: “It is concerning that so many parents have said they don’t think their children are drinking enough fluid throughout the day and I hope that parents and schools can find a good solution to this problem. It was reassuring to learn that 80% of parents said they would like their children to drink more water, as this is the ideal choice for regular hydration as it contains zero sugar, calories, preservatives or additives.”

While the amount of fluid a child needs depends on many factors including age, gender, weather and physical activity levels; guidelines from the Department of Health state that they should aim to drink approximately 6-8 glasses of fluid per day (on top of the water provided by food in their diet). Younger children need relatively smaller drinks (e.g. 150 ml serving) and older children need larger drinks (e.g. 250–300 ml serving). 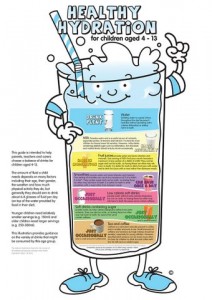 Further academic research of 1,456 children and adults in the UK, published in Nutrition Today, found that more than half of 4 –18 year olds’ fluid consumption was below the European Food Safety Authority (EFSA) recommendations. Author Joan Gandy, PhD, RD, a dietetic consultant and fellow of the British Dietetic Association (BDA), also said that “water consumption was low for all age groups of children” and on average, children were consuming at least 175 kcal per day from soft drinks.

Nearly a quarter of parents (22%) said they worry that their child’s performance suffers at school due to dehydration. Studies show that 60 per cent of children arrive at school insufficiently hydrated (Barker et al, 2012) and those arriving with a hydration deficit perform worse in cognitive tasks (Edmonds 2012).

Recent research by Dr Caroline Edmonds, Senior Lecturer at the School of Psychology, The University of East London, suggests that children who receive additional water could improve their ability in key classroom activities such as handwriting and copying text, as well as maintain their attention.

Children were tested after water supplementation of an average 168ml, and without water supplementation. The tests included a letter cancellation task, ball catching and a ‘whack a mole’ style game on the Wii console. Children had significantly higher scores in the computer game when supplemented with water, as well as better scores in the letter cancellation task and consuming more than 200ml improved ball catching skills.

Dr Edmonds, said: “Evidence suggests that once children arrive at school, 71 per cent do not drink sufficient water throughout the day to counteract the risk of dehydration or even to maintain the hydration level that they had when they arrived at school. One of the biggest barriers is that it is still not ‘cool’ or fashionable to drink water in school. The other challenge is increasing accessibility to water, which would help increase consumption both in and out of the classroom.”

The research by the NHC also showed that parents considered smoothies as a “healthy” option for their children to drink throughout the day (85%) with almost all saying that fizzy drinks are “unhealthy” (99%). Recent media reports have highlighted that both these drinks contain similar levels of sugar.

Dr Emma Derbyshire commented: “Fruit juice should be consumed in moderation and smoothies should really only be drunk once a day. It’s important to note that these drinks are perfectly healthy in moderation, but that water and milk are the best drinks recommended for regular consumption with children this age.”

Dr Emma Derbyshire has offered some top tips for parents on how to encourage children to drink more water and stay hydrated throughout the day:

1. Children often copy parents’ behaviour and habits, so try to get into the habit of drinking more water in front of your child(ren).

2. Always offer water at mealtimes – apart from anything else it will help those vegetables taste less bitter if children are drinking something plain, rather than sweet.

3. Put a bottle of water in lunchboxes to encourage children to drink at lunch time.

4. Don’t overlook the need to give your child(ren) a drink at breakfast so they start the day well hydrated. Water is best as it contains zero sugar, calories, preservatives or additives.

Aimed at informing both parents and children on healthy hydration guidelines, a ‘Children’s Hydration Glass’ was developed last year by the NHC in collaboration with the British Nutrition Foundation (BNF). The infographic (pictured in this page) includes hydration guidance as well as advice on fluid consumption for children

For more information on hydration advice for you and your child(ren) visit: www.naturalhydrationcouncil.org.uk

“Like a lot of schools, my children’s school is reluctant to let pupils drink ‘too much’ during lessons as they worry it will increase bathroom visits. This obviously makes it difficult for me to make sure they drink enough. When they don’t get enough water they suffer with headaches and constipation – all the usual signs of dehydration, and it must affect their concentration at school too.

It’s a bit easier now they are older, but now the battle is to get them to drink healthy options. Some of their school friends take sugary drinks to school, rather than something healthy like water. But, my motto has always been, if it’s not on offer at home, then they won’t grow up asking for it. My son thinks fizzy water is a treat but my daughter suffers more from her peers and does want lemonade. She is allowed one glass of lemonade when we go out and is then quite happy with water. I’m hoping it stays that way!”

Tags:  parenting skills school children hydration schooling
This entry was posted on Tuesday, May 28th, 2013 at 9:00 am and is filed under Schooling. You can follow any responses to this entry through the RSS 2.0 feed. You can leave a response, or trackback from your own site.