How much will ‘back to school’ cost us this year?

How much will ‘back to school’ cost us this year? 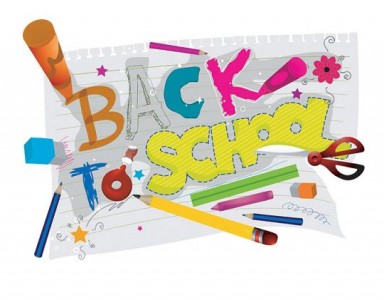 As families up and down the country prepare for the start of the new school year, the Cost of a Child study from protection specialist LV= (LV= Asset Management), reveals parents are set to spend £736 million[1] on ‘back to school’ basics including uniforms, stationery, sportswear and school books. This equates an average family cost of £125 or £77 per child.

The ‘back to school’ costs rise to £81 per child for secondary school aged children, compared to £67 for junior school and £63 for infants. Parents living in Scotland spend the most preparing for their kids to go back to school at £89 per child with North West and Londoners not far behind, spending £88 and £86 per child respectively. The cheapest place to send children back to school is the East Midlands where parents spend £60 on average.

The total cost of ‘back to school’ spend has increased by £27 million over the last 12 months (£709 million in 2010). Over half (57%) of parents feel under more pressure this year to spend on back to school items.

Back to school spending breakdown

In terms of new purchases for their children going back to school this autumn, the table below shows the most popular items parents will buy this year and the average cost[2].

In order to reduce costs, over half of parents (53%) are considering using low cost suppliers for back to school items, such as supermarkets, to buy basics including uniforms and stationery, and nearly one in four (22%) are considering giving their kids second hand items, including hand-me-downs.

In addition, almost one in five (16%) say instead of travelling by car, their children may travel to school by foot or public transport to save money, and 16% are considering school dinners for their children if they work out cheaper than a packed lunch. In addition, almost a third (31%) of parents are planning to cut back on the amount of extra curricular activities they pay for such as ballet, music and sport lessons.

LV=’s annual Cost of a Child study, released earlier this year showed the cost of raising a child until their 21st birthday now totals more than £210,000[3]. This equates to £10,040 a year, £836 a month or £27.50 a day. The cost of raising a child is up 50% from LV=’s first Cost of a Child Report in 2003[2]. Education (not including private school fees) remains the second biggest expenditure behind childcare, costing parents £55,660 over a child’s lifetime. The report also found that parents were set to spend £8.6 billion over the summer break on childcare (£3.2 billion) and entertainment (£5.4 billion)[4] 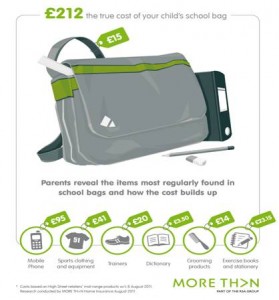 What’s the true of your child’s school bag?

Today’s back-to-school essentials are expensive. A recent research run by MORE TH>N Home Insurance reveals that the true cost of your child’s school bag is £212 always or regularly including mobile phones, grooming products, sports kit and stationery. A surprising number of young people (aged 11 – 14) are also carrying expensive gadgets and technology such as iPads and netbooks (one in ten). ( infographic). These exorbitant costs will not stop once the term starts as the average school child loses £51 worth of kit from their bag over the course of a year. MORE TH>N Home Insurance www.morethan.com

£736m being spent on children going back to schools is calculated by taking into account the number of people sharing the responsibility of purchasing the items.

[3] The cost of a child calculations, from birth to 21 years, have been compiled by the Centre of Economic and Business Research (CEBR) for LV= in January 2011 and are based on the cost for the 21 year period to December 2010. The report also includes omnibus research conducted for LV= by Opinium Research from 25-28 January 2011. The total sample size was 527 parents of children under the age of 18. Results have been weighted to a nationally representative criteria.

This entry was posted on Saturday, September 3rd, 2011 at 2:22 pm and is filed under Blog, Schooling. You can follow any responses to this entry through the RSS 2.0 feed. You can leave a response, or trackback from your own site.