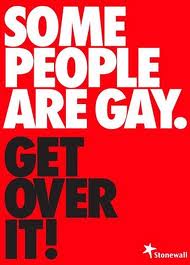 In spite of everything that’s gone before, the last 12 months have been the happiest and most special of my life. To become a parent is a blessing I never imagined might be bestowed upon me until recently.

It’s an awe-inspiring responsibility and both David and I are determined to fulfil that responsibility – not just to our son but to his generation. We want him to grow up in a Britain where every young person is not just loved as much as we love him, but is afforded fair treatment and respect. However, as we start thinking about Zachary’s future education it’s clear that this Britain doesn’t exist yet.

As another annual anti-bullying week approaches, homophobic bullying is still almost endemic in thousands of schools across our country. We owe our children better.

For too long schools have been afraid to take action. They’ve feared the sort of moral panic generated by oddball fundamentalists claiming that somehow seven year-olds are being tutored in having sex. Sensitively addressing in a primary school the fact that some children have two mummies or two daddies, as our son does, is something that can easily be done – just look at Stonewall’s compelling ‘Different Families. Same Love’ materials beautifully crafted for exactly that purpose.

And failing to address the still everyday use of the word ‘gay’ as a playground insult is also inexcusable. Those who do eventually realise that they’re gay find that the word which describes them has been used – unchallenged – as a proxy for anything that’s useless or rubbish for half their childhoods. There’s now firm evidence of the damage it does to young people’s self-esteem.

This sort of bullying doesn’t just impact on those who might one day be gay, or who have gay parents. It affects all sorts of children simply because they’re different. Boys who do their homework and girls who are good at games. Homophobic bullying isn’t only an enemy of kindness and respect, it’s an enemy of attainment across the board.

There’s an associated area where we’re also all painfully underserving our next generation. That’s in our continuing failure to furnish them with honest and appropriate sex education from the time they need it. Too often, we still take a near-Victorian approach to the sex and relationship education which should be at the heart of our national curriculum.

Six hundred young people between 16 and 24 – both gay and straight – were diagnosed last year in this country with HIV. Many of them were pitifully ignorant of issues of safer sex. Also, just as important, they don’t know that while combination drug therapy may keep them alive for many years to come, it frequently has deeply unpleasant side effects. These individual calamities are an indictment of our national failure to take this issue seriously. And it’s young people whose self-esteem has been undermined by homophobia who often end up taking even greater risks with their own health and futures.

We owe it to boys and girls to have frank, open and realistic discussion with them before the age of sexual activity so that they’re prepared and protected. There’s no evidence – even if Tea-Partiers in the US fancy the possibility  – that abstinence campaigns either work or indeed successfully elevate the sanctity of marriage. Instead, they simply give too many schools and teachers an excuse not to fulfil their responsibilities.

Both of these oversights are tragedies for our country. The consequence of failing to address them  – as parents, as government ministers, as teachers, as school governors – will continue to be tens of thousands of individual tragedies for young Britons to whom we owe a duty of care.

I’ve got particular admiration for someone like Ben Cohen. This is a world-class straight rugby star who’s set up a foundation to support charities working around homophobic bullying. Now touring schools around the country, he understands that giving licence to any sort of bullying makes all bullying acceptable.

But just like Ben, every one of us can make a difference. We can all contact our former school or the schools where we live, both primary and secondary, asking the headteacher exactly what he or she is doing to combat homophobic bullying and to equip young people with appropriate and robust sex education. We’re doing this with our local schools too.

David and I don’t want Zachary to be a focus of people’s attention as he grows up  –  he’ll become his own man and we’ll be incredibly proud of whatever choices he makes. He may one day be straight, he may one day be gay. He may turn out to be an Adonis. Or a booklover. Or both. He can be whatever he likes and we’ll continue to treasure him, as we do now, like nothing else in the world.

But above all, we want him to be safe. And we’re determined that he’ll grow up in a world different from the world that we grew up in ourselves.

This entry was posted on Friday, November 4th, 2011 at 12:10 pm and is filed under Blog, Schooling. You can follow any responses to this entry through the RSS 2.0 feed. You can leave a response, or trackback from your own site.