Pricey school uniforms should be dropped in favour of plain clothes and a badge. PARENTS are being forced to spend hundreds of pounds kitting out their children for the new school year, a Family Action report has found. 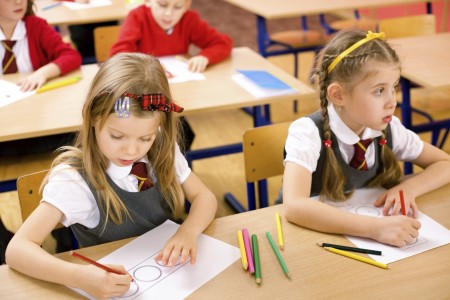 The Big Stitch-Up finds that the average annual back-to-school cost – including uniforms, coats, bags and stationery – is now £156 for a child at primary school and £285 for a child at secondary school.

That means families on the poverty line are expected to spend up to two fifths of their August income on back-to-school costs as schools make punishing demands on cash-strapped parents.

Items that some schools are requiring parents to buy for their children include £98 coats, £89 blazers, £38 rugby shirts and £27 jumpers.

A range of compulsory items – many of which can only be bought at expensive specialist shops – include jogging bottoms with the child’s initials printed on them, aprons for cookery classes, and even straw boaters.

Some schools expect pupils to have a summer uniform as well as a standard one, while others demand a range of branded sports wear. Parents of larger children have to pay nearly twice as much for larger size uniforms than they would for smaller sizes.

The majority of secondary schools expect parents to spend between £200 and £300, the report finds, yet parents of pupils at some schools are expected to fork out up to £600 per child.

Although primary schools are usually cheaper than secondary schools, some are still very expensive – with back-to-school costs reaching up to £180. 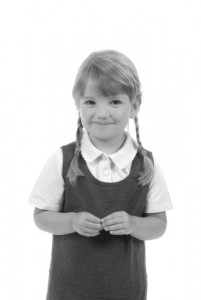 Other costs that schools expect parents to meet are for textbooks, workbooks, art and craft materials, school trips and outings, and even – as reported earlier this summer – iPads.

The huge increase in academy schools has brought with it a wave of rebranding and new uniforms. Schools have been known to change their uniform as often as twice in three years, prompting protests from parents.

Meanwhile, local authority grants for school uniforms are a patchy postcode lottery, with many having scrapped their schemes completely.

Family Action, which provides services and support for disadvantaged families, is now calling on schools to scrap specially branded school uniforms entirely and let parents shop around for plain, standard clothing from a retailer of their choice. In place of branded items, schools should introduce sew-on badges, sold separately and at cost price.

“This report shows that the cost of sending children back to school every September is becoming prohibitive for many families on low incomes. It’s not just the case of a badge and a jumper – these days schools expect blazers, summer and winter uniforms, and branded sportswear. We’ve even seen cases of aprons, boater hats and iPads being demanded. With local authority grants schemes offering only patchy financial support, parents are left to make very difficult choices about what items they can afford and what they have to sacrifice.

“The fairest solution is to change the whole way we approach school uniforms. Let families buy good value plain clothes from a supermarket and add a school logo to them later.”

A family with one child at secondary school and one at primary school buying a range of items will spend on average £441 over the summer, according to a Family Action survey of 13 schools. That represents nearly 40% of the monthly net income, after housing costs, of a single parent on the poverty line – and almost 30% of a couple’s.

Family Action has been a leading provider of services to disadvantaged and socially isolated families since 1869. We work with over 45,000 children and families a year by providing practical, emotional and financial support through over 100 services based in communities across England. A further 50,000 people benefit from our educational grants and information service.

Family Action works in more than 130 schools in England to support parents and children. This is done through a range of services including family support to improve relationships between child and school and school and home, mentoring services to support children and young people at key transition stages, such as the move from primary to secondary school, individual casework and one-to-one support, and opportunities for leisure and fun through after school and lunchtime clubs or holiday activities. We also have experience of helping many disadvantaged and low income families who struggle to afford school uniforms. For more information visit www.family-action.org.uk.

This entry was posted on Thursday, August 15th, 2013 at 8:00 am and is filed under Schooling. You can follow any responses to this entry through the RSS 2.0 feed. You can leave a response, or trackback from your own site.