Fertility Testing made easy for women! 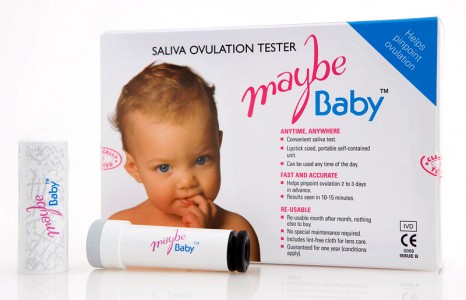 Its lipstick size means that you can basically carry it around with you and use it at any time.

This ovulation kit is very easy to test: It’s none invasive as all it requires is a simple saliva test.

To use the device, all users need to do is remove the microscopic lens and place a small saliva sample on the flat surface, then replace the lens into the unit and leave to dry for 10-15 minutes. Once the saliva has dried, the user looks into the easy-to-use microscope to reveal a clear result – the user will see either: pebble and dots, indicating a non-fertile pattern; a mixture of pebbles, dots and ferns, indicating that ovulation will occur in the next few days; or a full fern pattern indicating the presence of oestrogen, and so signifying that ovulation is taking place.

For the one in seven couples in the UK who face challenges when trying to conceive, the Maybe BabyTM Ovulation Tester offers women the chance to really get to know their ovulation cycle and pinpoint that point in their cycle where they are most fertile. The test has already proved a best-seller in Australia and Eastern Europe, with tens of thousands of women using the device to give them the best chance possible to conceive.

The test is fully reusable, so women only need to buy it once and then use it for as long as needed, and at just £40.00 RRP, this revolutionary technology is affordable for everyone.

Every woman’s body is different, and many women do not have exact 28 day ovulation cycles, but the accuracy and ease-of-use of Maybe Baby TM means that all women can now get a clear picture of their own unique cycle pattern to help them pinpoint the most fertile period of their reproductive cycle and give them the best possible chance of becoming pregnant.

Marlene Aoun, from Australia used Maybe Baby after years of trying to conceive with her partner: “I began to lose hope until I found an ad for the Maybe Baby kit. I went straight away to the chemist and bought it. I realised then that my cycles were very different and I wasn’t ovulating around day 14. A few months later, Maybe Baby displayed those lovely ferns, and as you can imagine, my next pregnancy test was positive. My husband and I were over the moon. We have an adorable baby boy now, Christopher!”

Tags:  fertility pregnancy pregnancy after infertility
This entry was posted on Sunday, July 29th, 2012 at 9:57 am and is filed under Blog, Pregnancy & Birth. You can follow any responses to this entry through the RSS 2.0 feed. You can leave a response, or trackback from your own site.