A new support group launching in London later this month will focus on helping parents with fertility problems.

It’s a little known fact that around one in ten couples who have a child will have difficulty conceiving when they try for another baby. Most parents just expect that they’ll get pregnant again as easily as they did first time around, and it can come as a real shock if it just doesn’t happen.

When we think about infertility, we immediately focus on those who are childless – and most of the support, advice and help is inevitably centred on people who don’t have children. Parents who can’t conceive again tend to get little in the way of sympathy or support yet in fact as many as half of those seeking treatment at fertility clinics already have a child.

Parents often delay seeking medical help – after all, if you’ve had a baby there’s no reason to assume you’ve suddenly developed a fertility problem. There can be a range of reasons for this – from medical conditions which may have occurred since the previous pregnancy to problems relating to the delivery. Sometimes it’s simply the passage of time, as we become less fertile as we get older; you may be able to conceive with a minor fertility problem while you are still young, but this can have more impact when it is combined with naturally declining fertility. 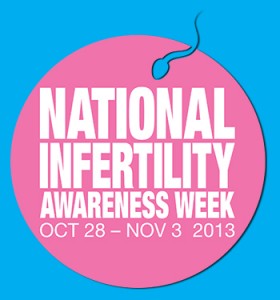 It’s often assumed that anyone tying to have a second or third child cannot possibly experience the kind of pain and trauma that childless couples live with. In fact, it’s a very different kind of pain – made all the more acute because you know the joys you are missing out on and you can’t escape the world of babies and pregnant women in the way that childless couples can. You may also feel sad that you can’t give your child a sibling, especially if he or she has started to ask why they don’t have brothers or sisters.

Now, for the first time, there’s a support group aimed exclusively at parents who have fertility problems. If you’re having problems conceiving, come along and join us – meet other like-minded parents who will offer support and share tips and advice. The group is being set up by  Infertility Network UK as part of National Infertility Awareness Week.

First meeting Monday 28 October at 6.30 – 7.45 pm in Central London.  If  you would like to come along please email  katebrian@infertilitynetworkuk.com

This entry was posted on Monday, October 21st, 2013 at 1:05 pm and is filed under Pregnancy & Birth. You can follow any responses to this entry through the RSS 2.0 feed. You can leave a response, or trackback from your own site.