Walking to school as a lifestyle choice

If walking was an official sport, I would probably be an Olympic champion. I fought for a school which was at walking distance and my son and I have been enjoying the walk to school routine every day throughout the primary school years. Since he started secondary school he has been happily walking to school. It is obvious that walking is highly beneficial to both the physical and mental health. It’s a no-brainer that for the school run parents should use the car less. 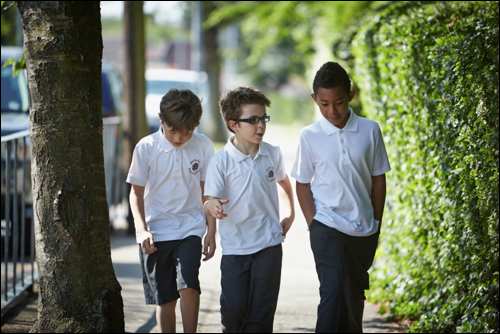 Research confirms that walking helps fight the child obesity crisis as well as a rise in mental health and well-being problems. We know that keeping active is a major part of the solution.

We must prioritise ways of encouraging physical activity if we want today’s children to become healthy adults. The walk to school is a free, easy and accessible way for parents and their children to achieve this. 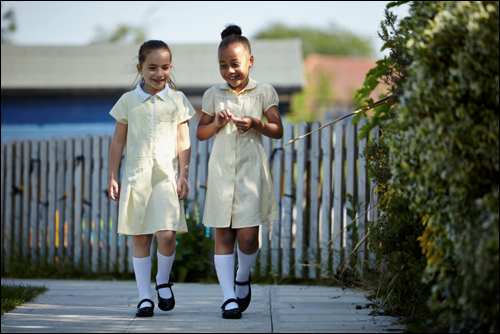 More than half of parents see a noticeable improvement in their children’s happiness after they walk to school.

National charity Living Streets conducted research with 1,500 UK parents and found that half see an improvement in their child’s mood (50%) and behaviour (47%) after they’ve done physical activity. Yet, just 21 per cent of boys and 16 per cent of girls get the recommended daily amount of physical exercise (60 minutes) and a third of children are overweight or obese by the time they leave primary school. Schoolchildren in the UK are some of the unhealthiest and unhappiest in the world and walking is one of the easiest and most accessible ways of maintaining a healthy weight and reducing stress levels.

Walking to school has been shown to improve children’s concentration, help them feel more alert and achieve better grades than those who are driven – now parents are highlighting that it can improve mood too. Over half (52%) said that they saw an improvement in their child’s happiness after the walk to school. Research also suggests that children who walk to school get 24 minutes more exercise per day. 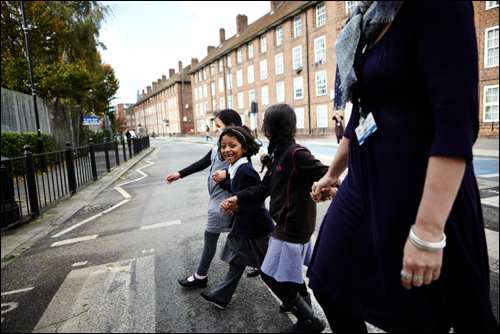 Living Streets’ research shows that parents don’t just think the walk to school benefits their children. Almost 50 per cent said they feel healthier for walking their kids to school and 40 per cent said they feel happier after walking in. A third also said it helps them to feel less stressed and over two thirds (67%) agreed that it’s a great time to spend with their children.

Of the parents surveyed whose children don’t walk to school, over half (52%) said that they would like them to walk to school. However, congestion and unsafe driving outside the school gates overwhelmingly deter parents. A huge 58 per cent said that vehicles driving too quickly were their greatest worry when it came to the school run and a third said overcrowding (30 per cent) and unsafe parking (34 per cent) also put them off. Aggression was also a factor with 20 per cent experiencing it, either from other parents or local residents.

London parents experience the most aggression outside school gates from other parents – 20 per cent cited this as the thing which worries them the most about the school run.

Stranger danger was also a big worry – a quarter said it worries them.

40 per cent of parents in London say they enjoy the walk to school because it’s cheaper than other modes.

Out of the UK, the highest proportion of London parents said their child gets the bus some or all of the way to school (25%). 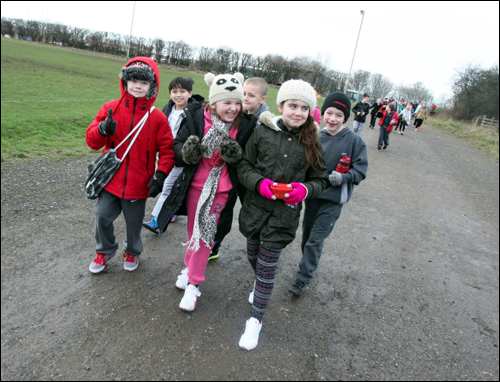 In London it should not be too difficult to find a park for walks. My favourite is most certainly Richmond Park. There’s nothing more relaxing and good for your fitness than a walk in the park.

Look how happy kids are when surrounded by flowers in the park.

This entry was posted on Monday, September 23rd, 2019 at 11:03 am and is filed under Parenting Skills. You can follow any responses to this entry through the RSS 2.0 feed. Both comments and pings are currently closed.