The National Society for the Prevention of Cruelty to Children (NSPCC) recently launched an ‘Underwear Rule’ campaign to help parents protect their children from sexual abuse. 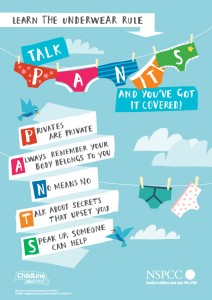 It comes as a new online YouGov poll shows half the parents of 5-17-year-olds who took part in the survey have never spoken to their sons or daughters about the issue.

And of those who have more than two in five (43%) said it was a difficult conversation.

Just over one in ten (11%) UK adults surveyed said primary school children faced the biggest risk of sexual abuse from someone they don’t know with half (51%) listing ‘stranger danger’ an area of concern for children of this age. However, previous NSPCC research has shown that in at least 90% of cases the offender was known to the child.

Awareness of sexual abuse has risen dramatically since the vast catalogue of assaults committed by Jimmy Savile were revealed last year, with the NSPCC’s helpline experiencing a huge rise in calls. But while parents want to help their children stay safe from sexual abuse many don’t always have the confidence to explain how.

The importance of this is underlined by one of the YouGov findings which shows more than 83% of those taking part said they thought parents of 5-11-year-olds were responsible for talking to them about the risk.

The six week advertising campaign, which will be aired on nearly 60 local radio stations throughout the UK is being supported by Netmums and will help these parents teach the Underwear Rule’ to their children during simple conversations. The campaign complements the organisation’s ChildLine Schools Service which is visiting every primary school in the UK advising children on how to stay safe from all forms of abuse.

There will be supportive guidance for parents explaining the Underwear Rule. The NSPCC has developed an easy-to-remember guide – Talk PANTS – that helps children understand the key points of the Rule.

Always remember your body belongs to you

Talk about secrets that upset you

Speak up, someone can help 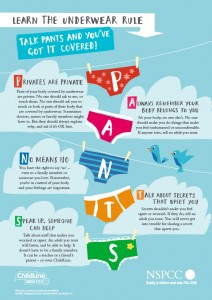 “The shocking case of Savile has horrified many parents and understandably it has heightened concerns around sexual abuse. But most abuse is closer to home and if we are to tackle this issue we must prevent it before it even starts. To do this we must educate our children about staying safe and speaking out. Parents have told us they lack confidence in approaching this difficult but important issue. We’ve worked with parent groups to devise a simple, age appropriate way of making sure children speak up if something happens. It’s a quick conversation but could make a big difference.

“It’s really easier than you may think and you don’t have to mention abuse or sex at all. Just ask them to remember the ‘Underwear Rule’.

“Of course telling kids about crossing the road, stranger danger and bullying are really important but this should be discussed as well. Most parents still think that stranger danger is a threat facing children from the adult world but most abuse is committed by someone known to the child with stranger abuse being very rare. This means traditional messages like ‘don’t take sweets from strangers’ are important but don’t work for much of the abuse that is occurring.”

The campaign video can be found at: www.nspcc.org.uk/conversations

This entry was posted on Sunday, August 4th, 2013 at 9:00 am and is filed under Parenting Skills. You can follow any responses to this entry through the RSS 2.0 feed. You can leave a response, or trackback from your own site.