How to Train the Perfect Page Boy

Your Son has been asked to be a Page Boy. Once the initial excitement has subsided, your thoughts will turn to how you can prepare him for the big day ahead. 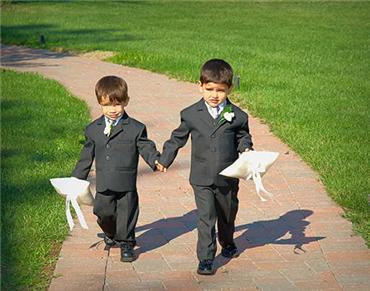 From a parent’s point of view, preparing him for the big day is the most important thing you can do for him. Make it fun and sound as though this is something he really would like to do. Don’t pressure him or tell him off if he gets it wrong. Go at his pace and reassure him that what he is doing is fine. Try and have a couple of laid back rehearsals at the venue before the wedding so he won’t freak out in the new surroundings on the day.

There are no hard and fast rules for Page Boy fashion, most Page Boys wear a miniature version of what the other groomsmen are wearing but if the thought of seeing your son in a mini suit and top hat really turns your stomach then why not try and put your son in an alternative outfit like a cute ‘Ring Security’ t-shirt? If this doesn’t float your boat then why not put him in a smart suit but mixes it up so it doesn’t look too formal and give him a new pair of Converse trainers? Remember boys will be boys, so if you are going down the suit hire route then maybe provide something else for him to wear after the ceremony as it probably won’t be long before he drops food down his front or decides to skid along the dance floor on his knees.

Set up a relative at the other end of the aisle so if he does make a break for it and flee then he will at least make it to the bottom of the aisle. This could be a good time to introduce a page boy gift. Remember that he won’t want the same gift as the older ushers so make it fun, a toy perhaps or some sweets. This can be used to tempt him down the aisle and will act as a definite mood sweetener. 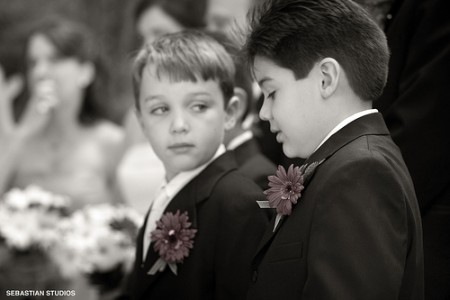 Read a book to him in the build- up to the wedding so he is not totally mystified about his job role, perhaps a helping hand in the shape of one of the other groomsmen that he has already met will help him down the aisle.

The most important thing to do is pre-warn the groom that he is a small child and may not want to walk down the aisle on the day. Children’s emotions can turn on a sixpence and when put under stress then a child is even more unpredictable.

Following these guidelines and remembering practice, reassurance and praise in equal measures should make sure your son, the proud page boy, gets down the aisle.

Tags:  page boy gift wedding tips
This entry was posted on Friday, March 29th, 2013 at 9:10 am and is filed under Parenting Skills. You can follow any responses to this entry through the RSS 2.0 feed. You can leave a response, or trackback from your own site.